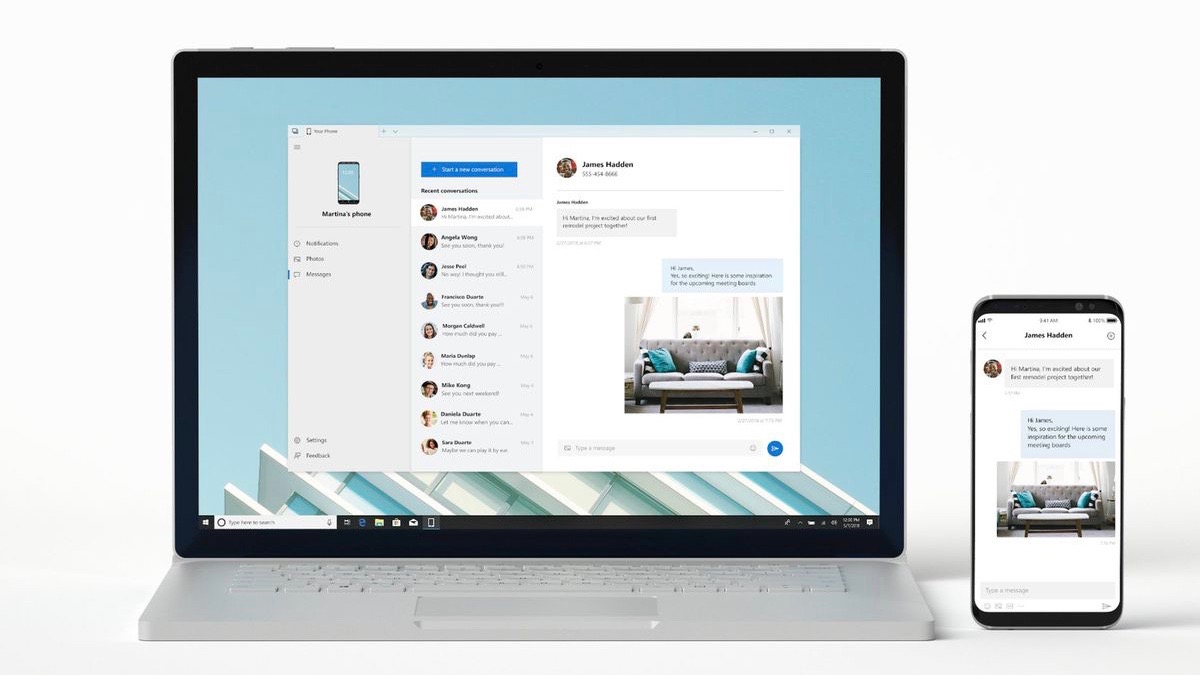 As part of its range of Surface product announcements today, Microsoft announced a new Your Phone functionality for Windows 10. This feature will allow Android users to easily mirror applications from their smartphone to their PC, and access things such as photos and text messages. Microsoft originally announced Your Phone last month, but is available to everyone today.

Microsoft didn’t dive into too many details during its Surface event today in New York City, but it touts Your Phone as an app mirroring feature for Android devices. At the start, Your Phone will support mirroring the stock Android texting application and photos app.

Here’s how Microsoft describes the feature:

Pausing a task on your PC to respond to a text or notification on your phone can instantly break focus and take you out of your flow. The Your Phone App brings instant access to your texts and photos from your Android phone right on your PC, enabling you to stay productive and maintain your focus.

On stage at today’s event, Microsoft also showcased how the feature can allow for mirroring of third-party applications. Snapchat was the choice demonstrated, but Microsoft teases that expanded app mirroring will be available at a later date.

Microsoft’s announcements today come ahead of next week’s Made by Google 2018 event, which will see Google showcase its latest hardware. The event is expect to bring the announcement of the Pixel 3 and Pixel 3 XL, the Google Home Hub and a refreshed 3rd-generation Chromecast, and the Chrome OS-powered Pixel Slate.

The core functionality of Your Phone is available now with today’s Windows 10 October 2018 update. Microsoft hopes the functionality will help “bridge the gap” between PCs and Android devices, but whether or not that is the case remains to be seen. Will you use Microsoft’s Your Phone application? Let us know down in the comments.

Sometimes you can’t stop for a text. Now you don’t have to. Get Your Phone app and text right from your PC. Available now in the #Windows10 October 2018 Update. #MicrosoftEvent pic.twitter.com/JCXP3cJ3Zl