As we approach the release of the Google Pixel Slate, Chrome OS has been seeing a constant flow of updates and improvements. The latest of these brings the technical and stylistic improvements of Android Pie to Chrome OS, alongside redesigned Google Assistant visuals.

Since 2016, Chrome OS has had Android and Play Store support, allowing Chromebooks to install Android apps. This support was initially implemented through Android Marshmallow, which was then further updated to Nougat. At I/O earlier this year, it was announced that Chrome OS would skip Oreo and go straight for Android Pie.

First spotted by Chrome Story, Android Pie for Chrome OS is now beginning to roll out to devices, starting with those on the Canary channel. For the unfamiliar, there are traditionally three update channels — Stable, Beta, and Dev — each updating at a different rate. Once you put your Chromebook in Developer Mode (not the same as Dev Channel), it becomes possible to use a fourth, bleeding-edge version called Canary, which updates nightly.

Canary is, of course, far more unstable than any other version of Chrome OS, but allows the brave to test new features the moment they’re developed. I’ve updated my Pixelbook to Canary to test the Android Pie update.

Honestly, not too much changes in Chrome OS between the two versions of Android. Everything will look and feel the same, and all your apps should still work as expected. The most exciting change in Android Pie for Chrome OS is actually in Google Assistant, which gets the slick visual update we first saw in our Google Pixel Slate hands-on. 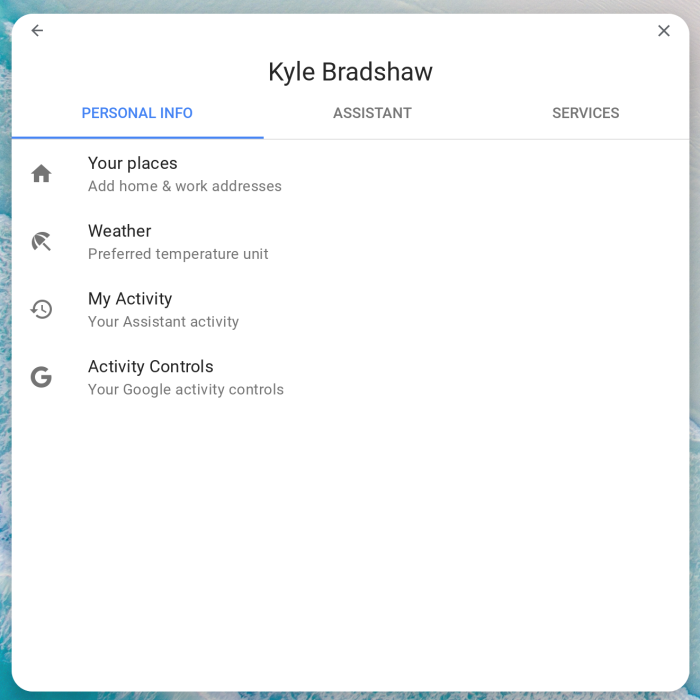 While the Assistant UI had previously been less than perfect for Chrome OS, it’s now a well-integrated piece of the operating system. With just a tap of the Assistant key (or by saying “Hey Google”), the attractive new UI jumps smoothly into place.

As we had noted earlier this year, the Chrome OS camera app will soon be replaced by the Google Camera app for Android. This was a much-needed change, as the default Chrome OS camera leaves much to be desired. This replacement came up again in our research of the Google Pixel Slate, as a requirement for the device to take Portrait mode photos. This camera still isn’t too impressive by comparison to the polished experience found on Pixel phones. At first, I believed it to be because the Camera app is marked as being on version 5.0, whereas the Pixel 3 Camera is on version 6.0.

Instead, it seems it is not the same Google Camera app we know and love. While the Pixel camera uses the package name “com.google.android.GoogleCamera”, I found that the Chrome OS version uses “com.google.android.GoogleCameraArc”. As per the specifics of what this means remains unclear, however we will know much more once the Pixel Slate launches.

The Android Settings app has also seen an update, as you would expect, bringing it up to date with Android Pie stylization. Inside, we can see that Android Pie for Chrome OS comes with August’s Android security patch. 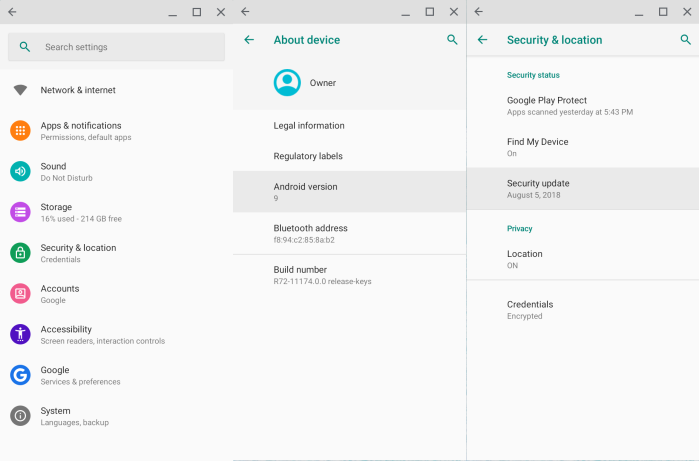 Are you running Pie on your Chromebook via the Canary channel? Let us know if there are any changes we missed below.