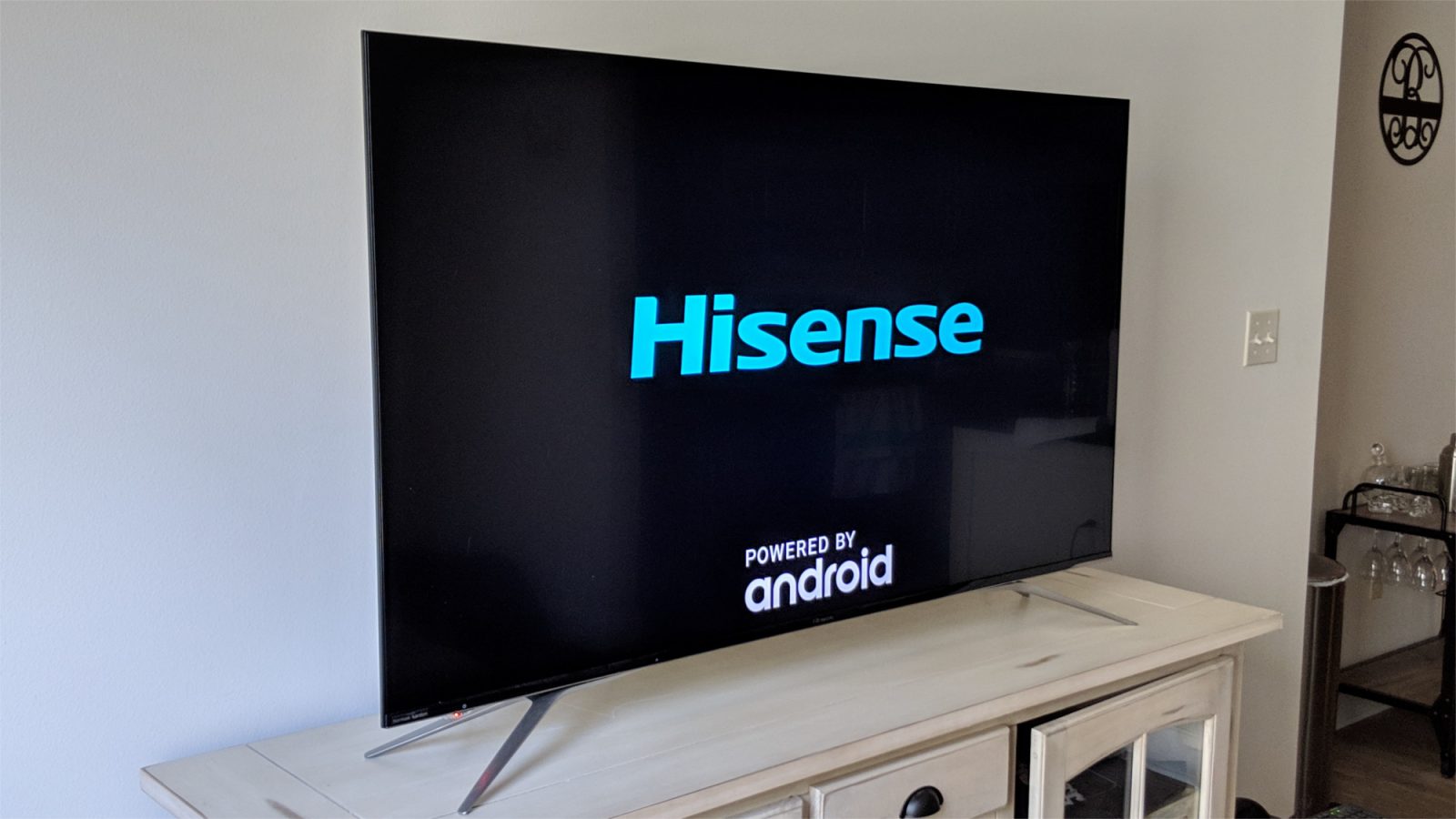 Unveiled at CES earlier this year along with a host of other new Android TV devices, the Hisense H9E Plus is a no-nonsense Android TV featuring 4K resolution with HDR support and stunning audio at a solid price. I got the chance to try one out and was surprisingly impressed.

The first thing I noted after getting the Hisense H9E Plus out the box was how light it was for its size. Even after attaching the legs and standing it up on my entertainment center (which is absolutely a two or three person job), the television felt almost precarious. Despite my initial concerns, it seems to be bottom heavy enough to stand firmly in place.

Once it was set up, something that jumps out almost immediately is how thin the bezels are. It’s not something that matters in the grand scheme of things, but should make a nice impression in your living room.

When you turn it on for the first time, you’re brought through the traditional Android setup process, connecting to WiFi, linking your Google Account, setting up the Assistant, and more. This is a relatively straightforward task, made only slightly inconvenient by the lack of a better method to type in the WiFi password.

Once setup is out of the way, you’re ready to dive into the world of Android TV. The H9E Plus comes with a handful of video services pre-installed (more on those in a bit), with more available from the Google Play Store. Like all other Android TV devices on Oreo, after you’ve signed in to the services you plan on using, you’ll be able to add channels for them to the homepage, highlighting tailored content.

One of the best parts of the Android TV experience is that the Google Assistant is built-in, offering quick answers to questions and easy access to videos and music from almost all of your apps. Even apps that I didn’t expect to work due to being primarily user content, like Plex, worked like a charm being controlled by voice. 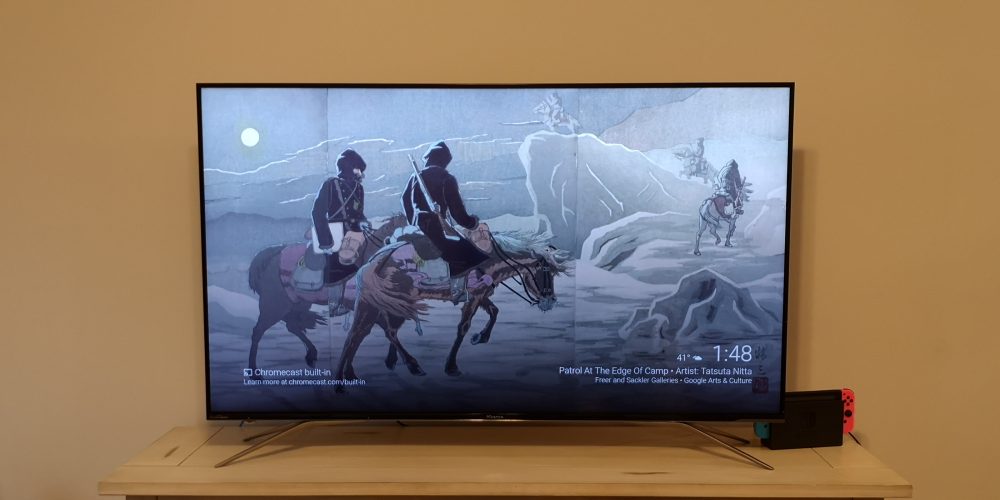 More than the apps and channels, though, I’ve found myself simply using the built-in Chromecast capabilities offered by Android TV. Combined with its integration with the Google Home ecosystem, sometimes it’s easier to just say “Hey Google, play some music on my TV” to my Google Home Mini than to use the built-in voice controls.

Around back, the Hisense H9E Plus offers four HDMI ports, all of which support 4K, but only two at 60Hz. Complementing those are two USB ports, an antenna port, a headphone jack, and even a set of old-school RCA composite video connectors. I ran into some WiFi issues in my time with the TV, but these were very easily remedied with the convenient Ethernet port.

Just as important as the TV is the remote you control it with. Thankfully, the Hisense H9E Plus includes a comfortable, easy-to-use remote, well designed for use with Android TV. For your convenience, Hisense included shortcuts to six different video services above the remote’s main controls. 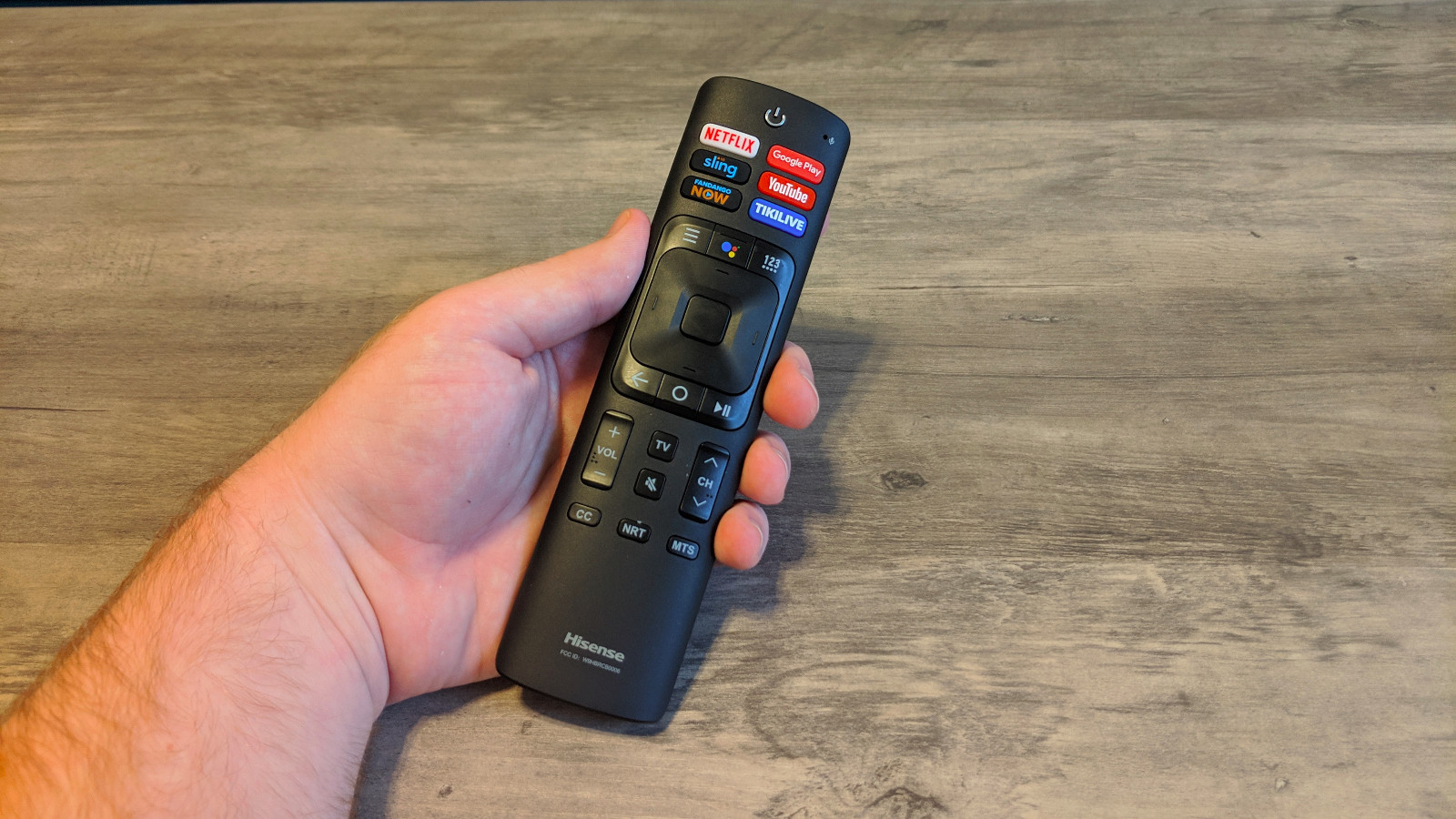 Favorites like YouTube and Netflix are featured, along with ones I don’t use and one which I’ve never even heard of, TikiLive. Unfortunately, these buttons are pre-programmed and cannot be changed. The collection of logos also detracts from the otherwise very sleek and pleasant looking remote.

The remote also features a dedicated Google Assistant button, which, when used for the first time, connects the remote’s built-in microphone to your TV via Bluetooth. If you attempt to use any kind of voice typing before setting up the Bluetooth connection, however, it will simply fail without an explanation. This could probably have been made a little clearer, or included during the initial setup process.

Using Hisense’s proprietary ULED technology, the H9E Plus offers fantastic visuals. 4K content looks crisp from couch distance, and anything smaller like 1080p is seamlessly scaled up. Dolby Vision and HDR10 formats are also supported, though I was not able to test them myself. I haven’t reviewed many TVs to be quite frank, so I can’t exactly offer a deep technical comparison or value conclusion here, but I was nothing but satisfied in my first several days.

To me, the biggest selling point of the Hisense H9E Plus is its sound quality. The 55″ model is equipped with premium 20W Harman/Kardon speakers, offering excellent detail, a solid amount of bass (but not overpowering), and a very high max volume. On the Android TV volume scale of 0-100, I usually keep the volume around 13. Even for quieter programs, I never had to turn the volume higher than a 35.

The Hisense H9E Plus is perfect for music, and also great for movies and games. I mean it when I say that this is the best sounding television I’ve ever used.

The combination of solid picture quality, incredible sound, and the Android TV platform at a fair price makes the Hisense H9E Plus an easy recommendation in my book. The Hisense H9E Plus is available for purchase at Best Buy for $699.99 and on Amazon for around $600.