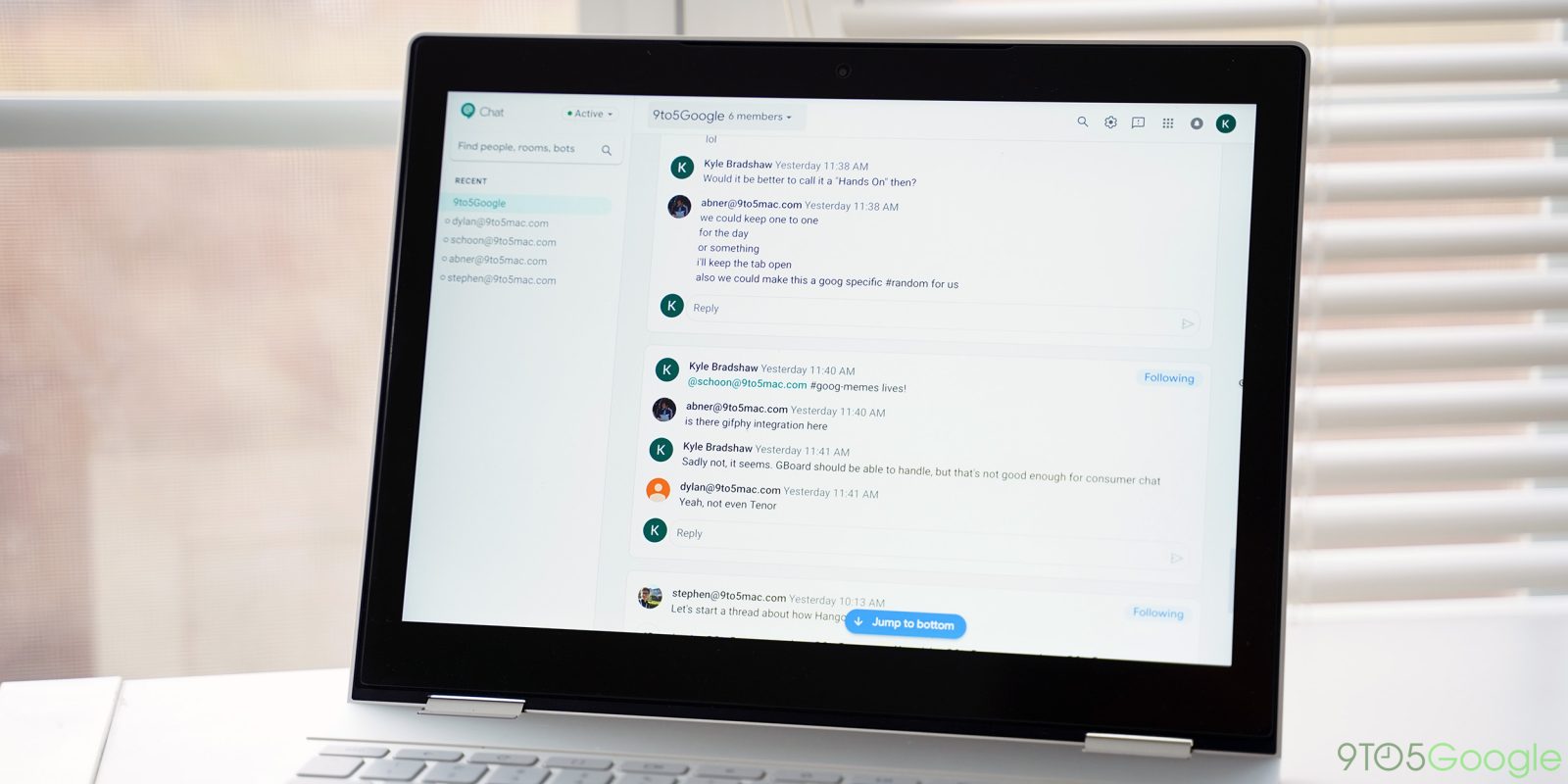 With all the buzz recently around (the recently dubbed) “Hangouts classic” shutting down, in favor of Hangouts Chat and Hangouts Meet, we took some time as a group to give Hangouts Chat a hands-on trial. Needless to say, things didn’t go smoothly.

Our network of sites, 9to5Google, 9to5Mac, Electrek, etc, all collectively use Slack to communicate. Considering we were already fairly used to the idea of group chats and threaded conversations, Hangouts Chat seemed like it could be a simple switch for us.

For the hands-on trial, we all installed the Android app or loaded up the web app, started a new room, and used Hangouts Chat as much as we could in place of Slack. This test lasted as long as we could bear — about an hour and a half.

When you first install the app, or open the web client, if you haven’t been invited to a room, you’re greeted with the option to start a new conversation or room. Easy enough.

Things get complicated when you then try to connect with someone whether by direct message or adding them to a room. If that person is not in your Google Contacts, they may as well not even exist to Hangouts Chat. 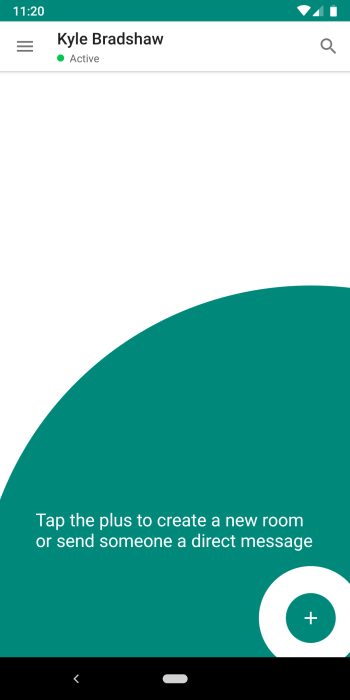 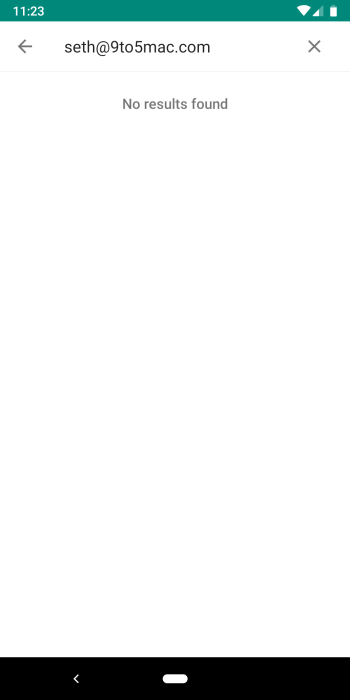 Upon joining a room, even with the whole 9to5Google crew added to my Google Contacts, no one had a display name. Each person could only see their own name; everyone else was displayed as their full email address. This stayed true between rooms and direct messages.

Mentioning someone in a message requires their entire email address, and looks very awkward, with two @ symbols. Even your own name, tagged in someone else’s message appears as your full email address.

Here’s the same pair of messages from two perspectives.

I dug into every possible settings menu I could find, and found no trace of being able to rename contacts or use names from Google Contacts. This is far from consumer-ready.

More of a discussion board than a chatroom

For an app with “Chat” in the name, which lets you create group conversations called “Rooms,” Hangouts Chat does not offer what you would expect from a chatroom experience. Instead of a linear timeline with optional threads (like Slack offers), every new message is a separate conversation thread.

This isn’t necessarily good or bad, but could certainly take some getting used to. It can be useful for keeping context fresh, especially as the leading message on each thread is always displayed. The model breaks down with Hangouts Chat’s current lack of polish, however.

For example, if new messages appear in an older thread, or a new thread is added to the room, the web client offers you a refresh button to see the new messages. This is downright clunky. And the Android app, for its part, doesn’t re-sort the thread list until you leave the room view and come back. 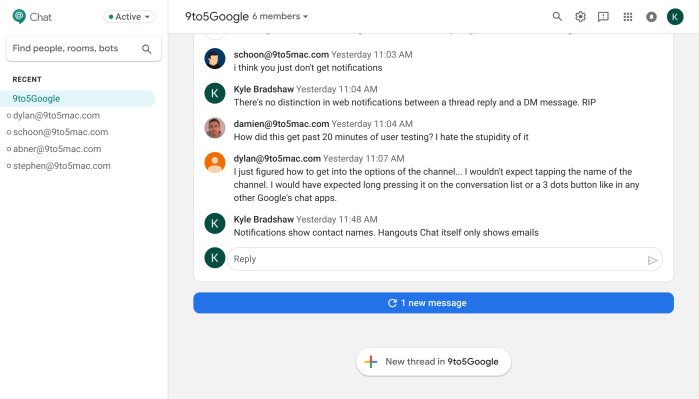 Direct messaging is solid and straightforward

One-to-one conversations and group messages work exactly how you would expect them to. They both behave like a typical chat conversation, with no threads or other quirks standing between you and your chat. Also, unlike rooms, direct and group messages have a prominently featured option to self-destruct after 24 hours. 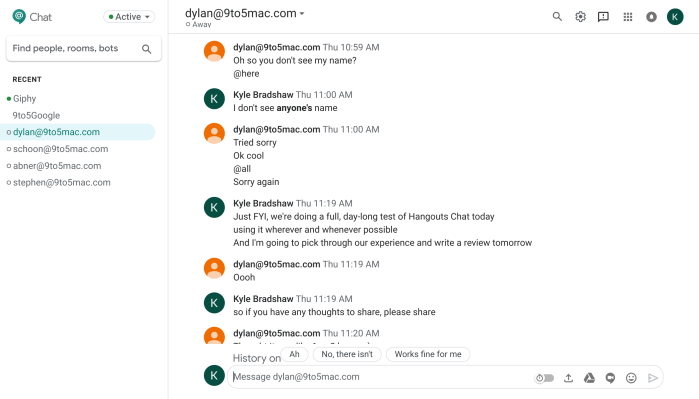 From Android, starting a direct conversation with someone for the first time requires you to type in their email address to find them in your contacts. On web, this can be simplified to clicking on a person’s profile picture, if you’re in a room with them.

Beyond that minor inconsistency between platforms, direct messaging was one of the better aspects of my hands-on time with Hangouts Chat.

Integration with Google and beyond

With one click or tap in either a thread reply or direct message, you can create a new Hangouts Meet video meeting link and attach it to your message. Then with one click, anyone can join that Hangouts Meet.

This was one of the more strangely impressive aspects of Chat. If your team frequently connects via video, this could be an incredible time saver. Perhaps when this hits consumers, it will have Duo integration as well.

Smart Reply support was also rolled into Hangouts Chat, shortly after we concluded our test. I went back and checked the responses offered to previous conversations, and found that, just like in Gmail, it consistently offers sensible answers.

Beyond Google’s own services, there’s also a full suite of chat bots from the likes of Giphy, Github, LucidChart, Trello, and dozens more. These integrations were not immediately noticed in our testing, as you may see in some of our conversations, but they seemed to work decently well. 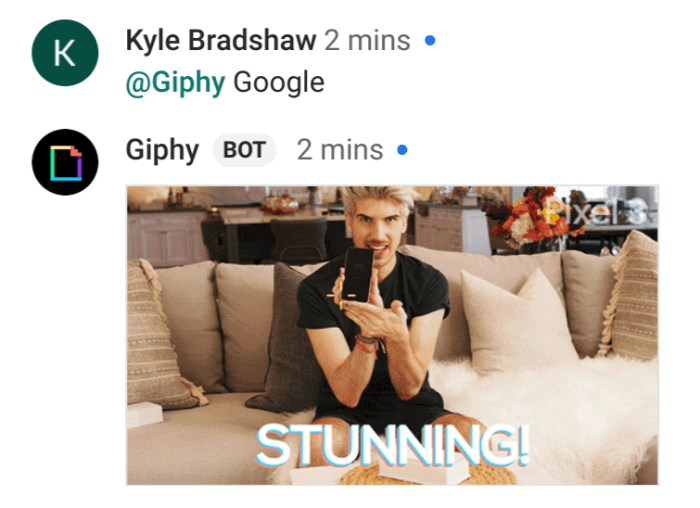 As it stands, Hangouts Chat is competing with Slack. And in that space, from what we found in our hands-on time, I don’t think any company should switch from Slack to Hangouts Chat just yet. If your organization has never used an app like Slack before, and is already a G Suite customer, Hangouts Chat could be worth a try, considering you’re already paying for it.

With a move into consumer space, however, Hangouts Chat would then be competing with the likes of Discord. Suffice it to say, Hangouts Chat stands little to no chance of ever winning that fight without some substantial additions.

If Google’s development focus is put on refining the direct and group messaging experience, to be more polished and “fun,” Hangouts Chat could potentially become a great product for consumers. Unfortunately, that focus would likely come at the cost of new features for the enterprise market, sacrificing Google’s paying customers and their needs to draw in a consumer market for whom Hangouts Chat was never intended.

Honestly, as it stands, Hangouts Chat has no killer features to switch to the platform, even if it did become great. The clearest recent example of this is Google’s Allo, which had plenty of “fun” features and a relatively consistent experience for consumers, but offered no reasons for anyone to ever make the switch. This lead the platform to ultimately join the Google graveyard.

Where Hangouts Chat really stands a chance in the future is continuing in its competition with Slack. If Google could simply polish the rough edges of the app and deliver a consistent experience between web and mobile, Hangouts Chat could be a big winner in the enterprise world thanks to both its deep integration with and inclusion in G Suite.