Hands-on: Focals by North are AR glasses having their Pebble moment 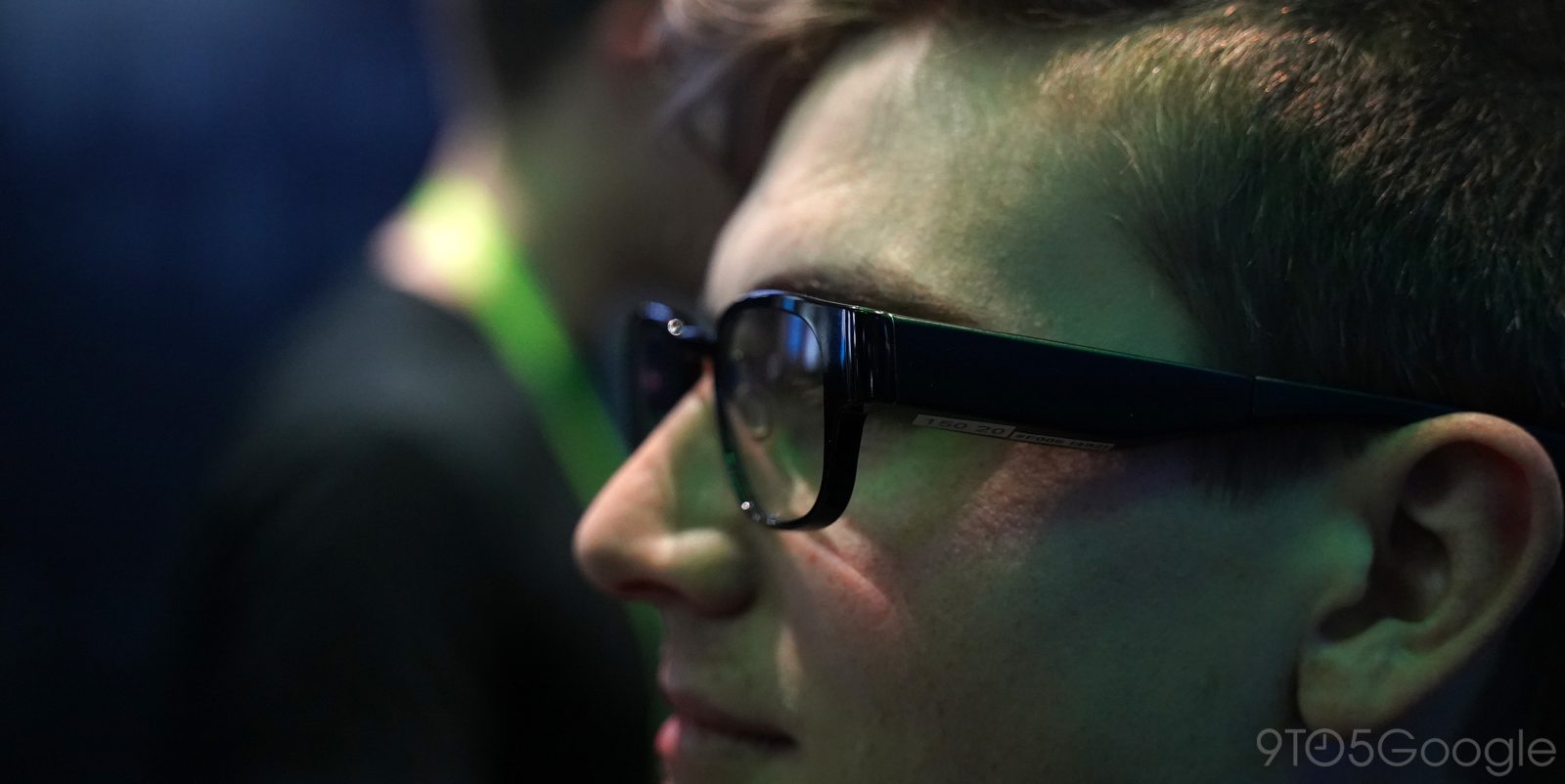 As I wrote a couple days ago, Google has lately been in the augmented reality background as it quietly pushes ahead with Glass Enterprise Edition in, well, the enterprise. But some other companies, in this case North, are still set on a much grander vision for consumer-facing augmented reality products. We had a chance to check out Focals by North at CES 2019, and boy was it refreshing.

At a high level, Focals by North are AR glasses, not dissimilar from products we’ve seen in this space before. What sets them apart, as is immediately apparent when you see how not-hideous they are, is their design-first and fashion-first approach.

North is building glasses that people might actually wear first, and making it a useful “gadget” second. This is so true to North’s approach, I think, that they might even be offended by using the word “gadget” to describe these glasses. I get the sense that they more want to be seen as a Warby Parker Plus of sorts — fashionable glasses that millennials (and younger) will love for their looks, with some useful-but-nearly-invisible smart features on the side.

North ensures me that things will evolve over time, but as of now the gadget side of things seems toned-down and limited to only the most essential use cases and features — and that’s not a bad thing. They can only connect via Bluetooth to your phone (there’s no LTE model, and they don’t connect directly to WiFi networks, either), they last around a day in terms of battery life, and North isn’t hardly talking about the specs at all.

They’re definitely minimal on the software side of things, too. There’s just a handful of screens that you flick through that provide those core use cases — like one for checking the weather, a home screen with the time, and a calendar for “staying on top of your day.” It’s simple and sweet, and that’s rare in this space outside of Google Glass, as far as I’ve seen at least. No one besides Google and North have really done things this intuitively.

There are many examples of things they’ve done to maximize normal-ness and minimize Glasshole-ness. For one, all interaction happens via a small joystick-like controller on a separate ring accessory called the Loop. There’s no touch sensitive strip on the side that makes it obvious to everyone around you that you’re interacting with a computer, one thing about Glass that really took you out of the moment. You can be entirely discrete with these, keeping your hand in your pocket for total stealth. 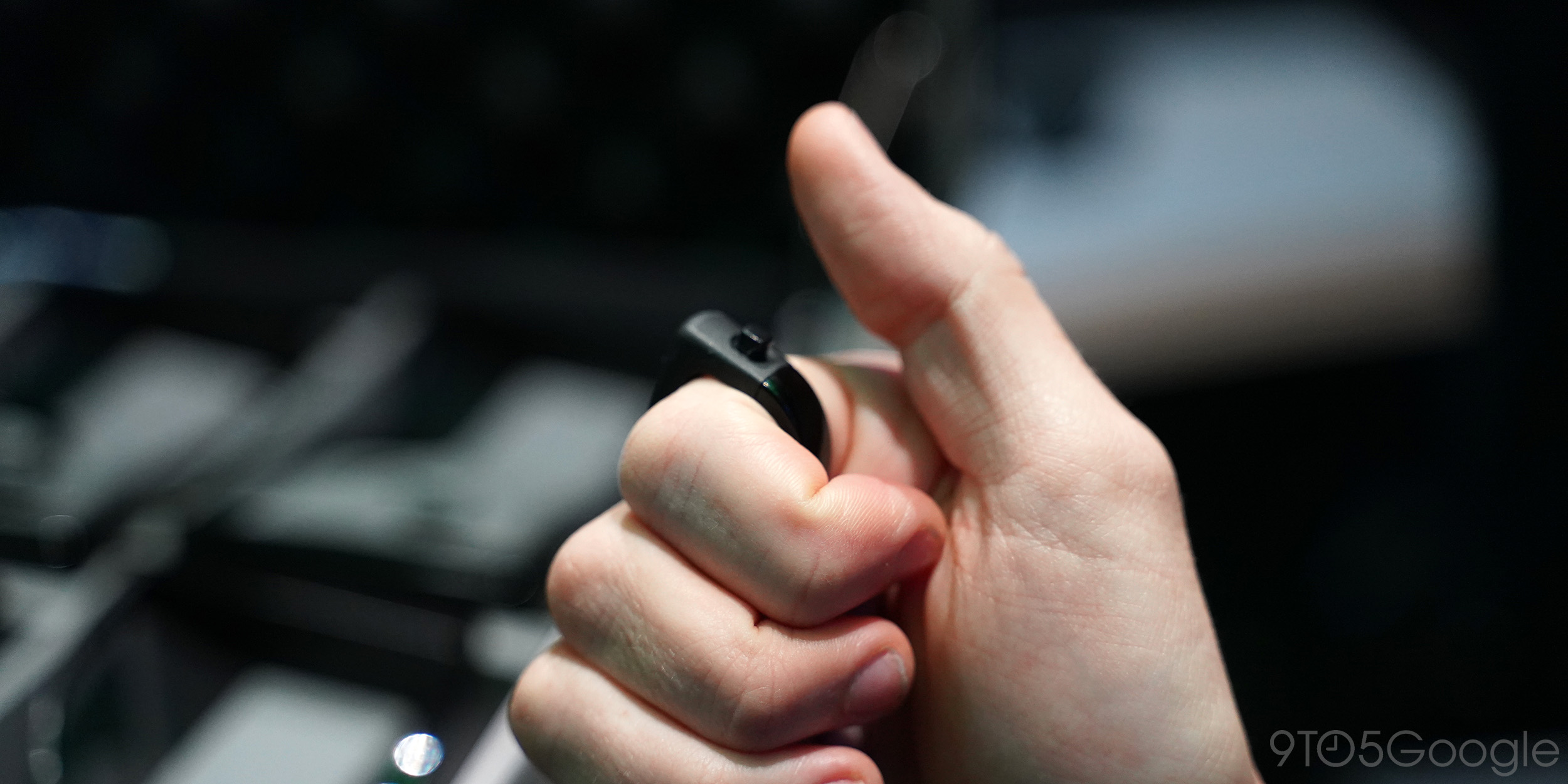 That means you can check your text messages or get directions in the projected display without anyone even knowing you’re interacting with the device. My initial instinct is that might be both a good and a bad thing: it’s easier not to waste time getting lost in the depths of your phone and it’s frictionless to perform these tasks. However, if you’re standing next to someone wearing these, it’s impossible to know if they’re actually paying attention to you.

Another interesting aspect of the glasses: There’s no hotword detection at all in the current implementation. So unlike a device like the Vuzix Blade, this isn’t really a “Google Home on your head”. It does, as of now, support Amazon Alexa (Amazon led North’s most recent funding round, by the way) and all of that accompanying functionality. But you have to invoke it solely by pressing and holding the button on the ring controller. From there, the device will listen to your voice. 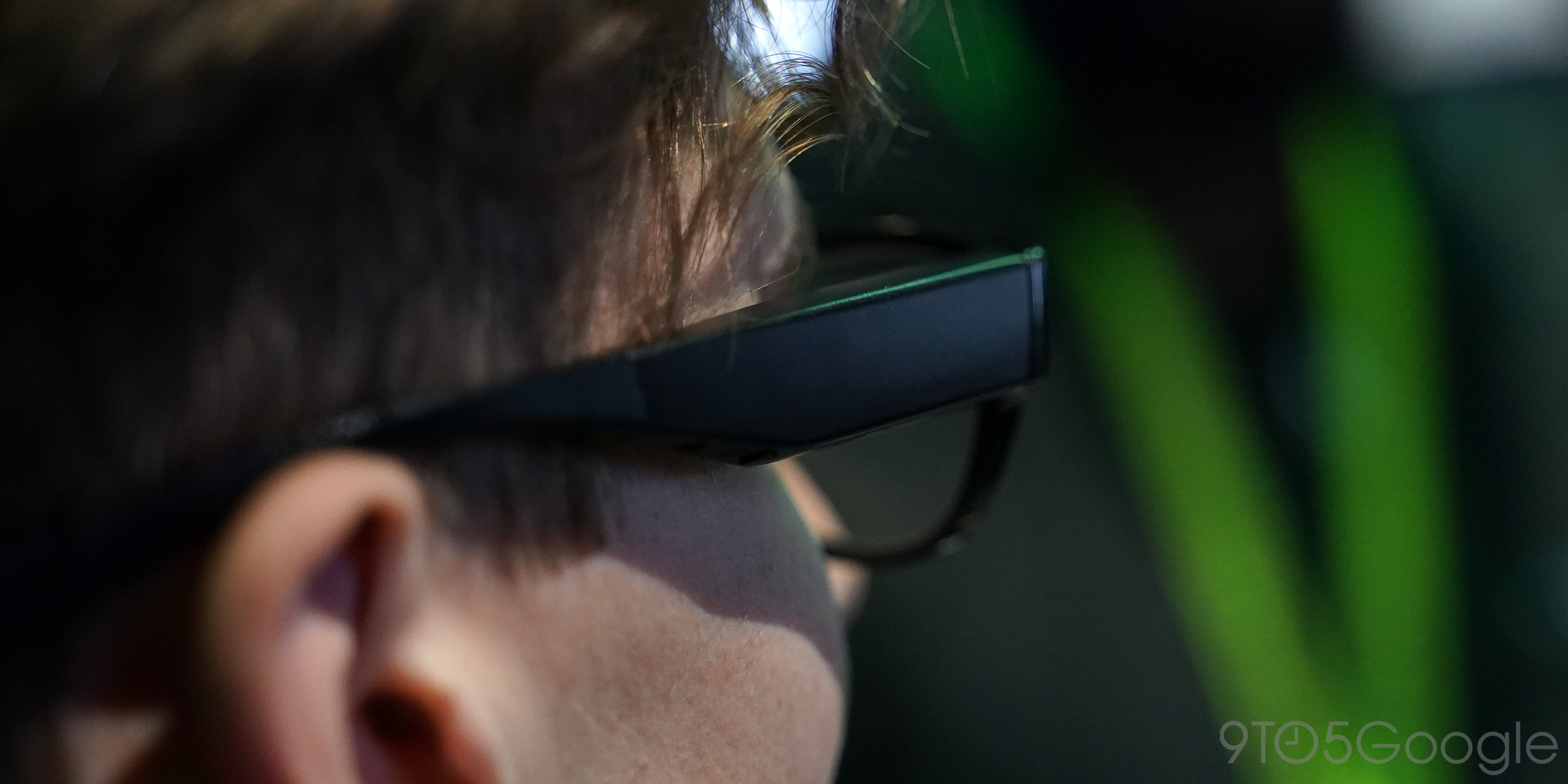 There’s no camera on these, which means the entire controversy surrounding the Google Glass camera and its creepiness is entirely avoided. By simply going without that feature, Focals by North avoid that fundamental concern. Someday we might want cameras on our smart glasses and that might be culturally accepted, and maybe a future version of Focals will have a camera, but I think Glass demonstrated that it’s just not a very good idea for now, and North is smart to learn from that lesson.

Probably the most obvious thing that sets these apart, as I already mentioned, is that the product very clearly prioritizes being undetectable as anything other than normal glasses. They’re not quite there yet, because there are limitations to how small you can make all the technology that powers these. The frames are obviously bulky on the inside if you look closely, and they can’t fold on the normal hinge at the corner of the frame like regular glasses — rather, the stem can simply fold in half for storage. So you can’t clip these to a button-up shirt or put them in a normal glasses case. (They do have a cool Spectacles-esque case — they hate that comparison, I’m sure — that I’m sure works fine.)

Other than that, though, they very nearly — even in this generation, which North says is rudimentary compared to some future models that are already in the works — pass as a normal pair of glasses. And given just how much functionality these pack, that’s an accomplishment. When I saw Vuzix at their booth this week, they compared their Blade AR glasses to the first iPod. While I don’t think Focals by North are quite that either, they’re definitely far closer to earning that comparison. 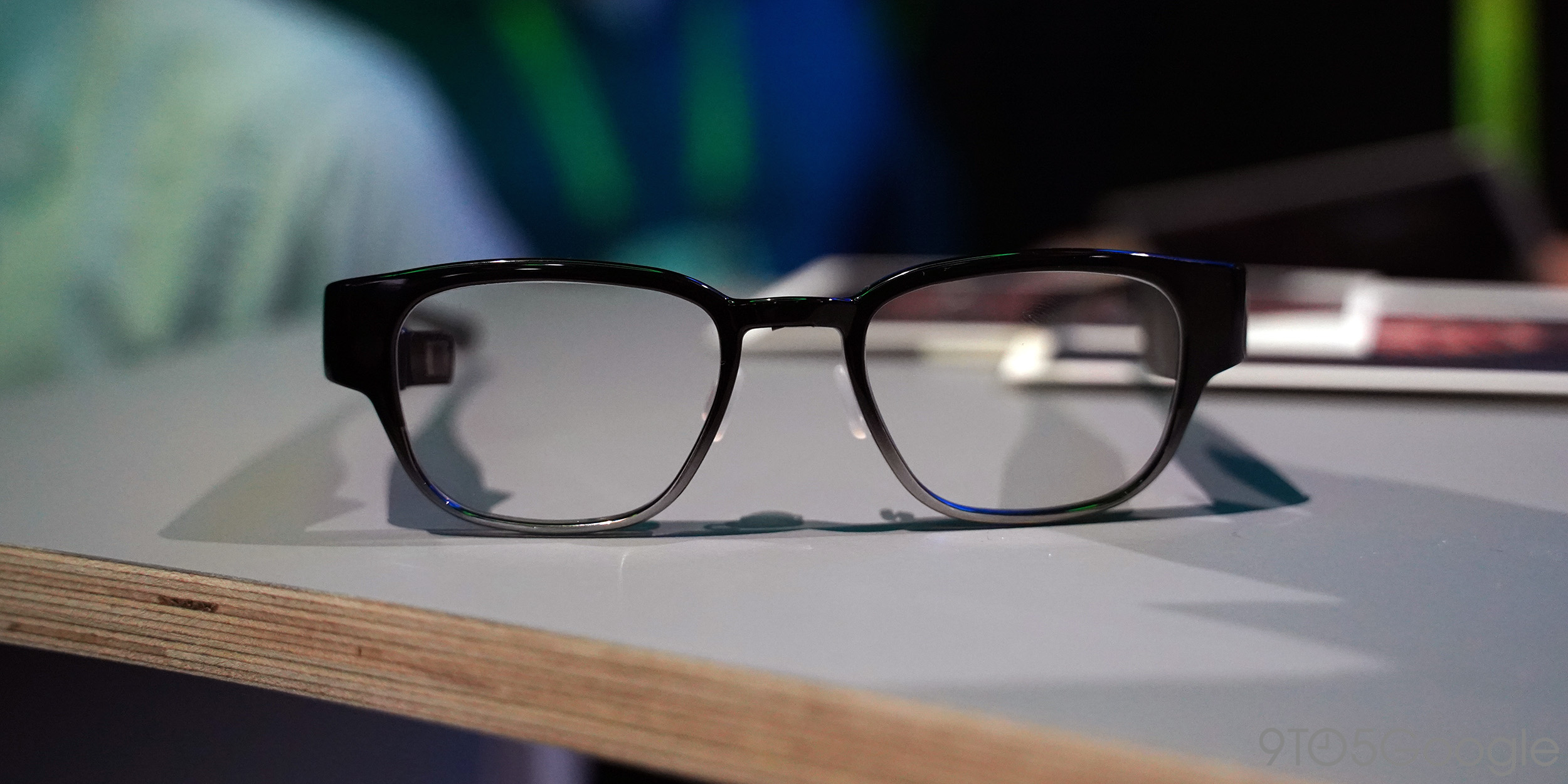 I got to see a few different styles in person at the North booth, and I can say pretty confidently that, from a fashion perspective, they’re all something I could see myself wearing.

North probably detests the unavoidable comparisons to Glass, so I’ll do my best to avoid letting my baggage of years of Glass coverage blur my vision of these. But frankly, even if I did, Focals are one of the only post-Glass AR products I’ve found that seem to share (and, obviously, given several years since that product, even surpass) Google’s original vision for consumer augmented reality.

To be clear, there’s essentially nothing that directly connects Focals to Google. There’s no Assistant integration here, they don’t have a glass prism in front of the right lens, there’s no bone conduction speaker. Of course, like Glass, these do work with both Android phones and iPhone. Really the only relation, in my eyes, is that Focals by North are probably similar to where Google Glass would be today if Google had spent the last few years continuing to develop it as a consumer product.

Rather than Glass, there’s another product that I think is a far less obvious comparison that’s actually more astute. I think Focals by North are consumer AR’s Pebble moment in some ways. And I definitely don’t mean that to prescribe North to an eventual buy-out by a larger wearables company in the space to eventually be killed off. North’s destiny will likely be entirely different. And of course, there’s a big difference in terms of financial accessibility between the two. Focals aren’t blowing up Kickstarter.

But North is a small, relatively unknown startup that’s killing it with a thoughtful approach to a fledgling category — a very refreshing approach to something that’s been around a while but just hasn’t taken off yet. I think, in many ways, that’s what Pebble was to smartwatches. Pebble really validated the category, and we might look back on these the same way.

Pebble wasn’t the first smartwatch, and clearly they didn’t win the smartwatch war. But they were the first to do a truly thoughtful, careful, and polished smartwatch that actually made sense and had even a chance at resonating with normal people and gadget lovers alike. It’s still early — you can only get Focals by North if you go to a store in Brooklyn or Toronto and get your face 3D scanned, not to mention they cost a whopping $1,000 to start — but I’ve come away from these with a feeling I haven’t felt in the AR space since Glass came parachuting down on Moscone. I actually want a pair.