Following last year’s Google Material Theme and complete launcher redesign aimed at tablets and other touchscreen devices, Chrome OS 72 is rolling out today. This big release brings Android 9 Pie to more Chromebooks and features a handful of other notable changes to Assistant, Cast, and PiP.

Announced at I/O 2018, the instance of Android used by Chrome OS for apps and the Play Store is now based on Pie. An upgrade from Nougat, Google skipped Oreo entirely and added some major changes in the process.

Google Assistant is now natively integrated into Chrome OS. This latest version first launched on the Pixel Slate is now expanding to other devices like the Pixelbook. Instead of a phone-sized panel in the bottom-left corner, it is now centered on the screen and similar to the new search/app launcher UI. Users can also minimize Assistant to a tiny pill-shaped bar.

Assistant greets you with “Hi, how can I help?” and features three suggestion chips to highlight functionality. Users can type a query — and benefit from the increased width — or issue a voice command with the Hey and Ok Google hotword. A gear button next to the microphone icon allows users to access the updated Assistant settings already found on Android.

Meanwhile, the Android settings page in Chrome OS is now styled like on the Pixel 3 and Pixel 3 XL with colorful Material Theme icons.

Chrome 72 removes the ability to setup Chromecast dongles using the Mac, Windows, or Linux browser. Users could previously setup Wi-Fi, device naming, and more by heading to chrome://cast. That URL would walk users through finding a streaming device on your network. Now, that page just shows users what special officers are available to them.

Google is directing users to the Google Home app for Android and iOS. It’s important to note that this change only applies to the setup process and not any casting functionality. Users can still send tabs, video, or audio from Chrome OS to a Chromecast or other Chromecast-enabled device, like Google Home, once everything is setup.

Meanwhile, Chrome OS 72 revamps the Cast UI. Instead of a panel opening at the center of your screen, it is now located at the top-right corner. The blue control strip has been removed for an entirely white interface. Source selection (tab, desktop, file) is no longer its own interface, but rather just a dropdown menu. Additionally, the list of devices is accompanied by more descriptive icons that identify screens, speakers, and groups. This new interface might not be fully rolled out for all users.

Settings have been slightly reorganized with the Passwords, Payment methods, and Addresses and more no longer under “People.” A new “Autofill” section now houses these options.

Picture-in-Picture has been available in the Chrome browser for several releases now. It can be enabled in YouTube with an extension, but video sites have yet to really support it. PiP is now available in Chrome OS, and is enabled by default when opening a local video file in the browser.

Like on other platforms, there’s a new “Picture in picture” button at the bottom corner of videos. The compact window features play/pause and close button, as well as the ability to resize by dragging at the top-left corner. At the moment, it is only available for websites and not Android apps. 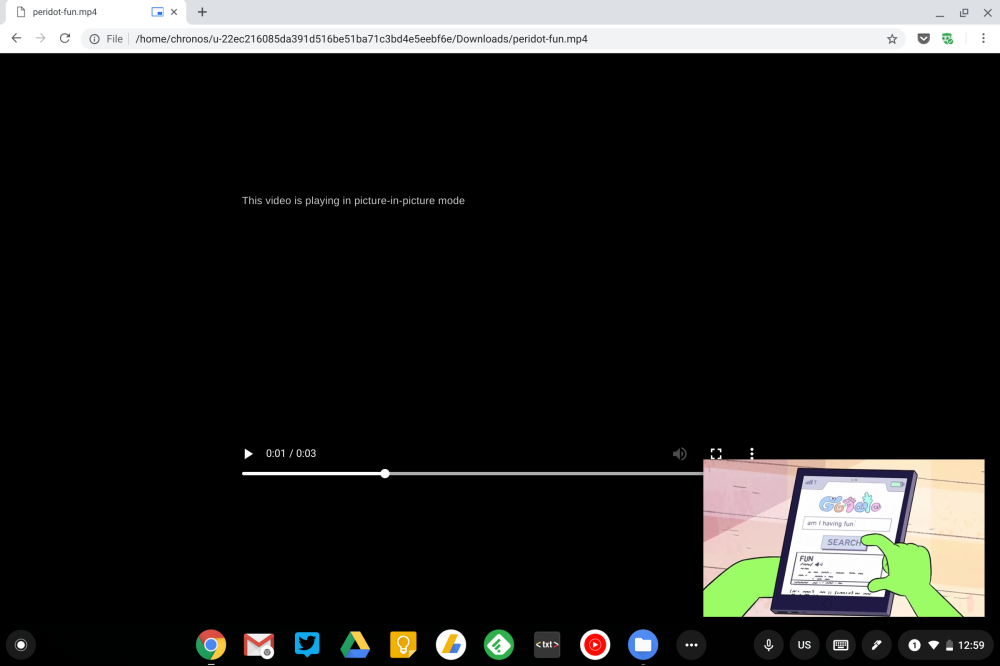 With USBGuard in Chrome OS 72, locked Chromebooks will ignore USB connections from printers, scanners, and other storage devices as a means to prevent malicious attacks. Connectivity will be restored once users log back into their Chrome OS devices. The feature can be disabled with the following Chrome flag if it results in any issues:

When available, Android app shortcuts will appear when performing searches in the launcher field. Meanwhile, a new “Speak text under the mouse” option allows the ChromeVox screen reader to begin speaking when users hover over any part of a page.

In other changes, Google officially notes that the “Chrome browser has been optimized for touchscreen devices in tablet mode.” We’re still looking for what that exactly entails. The official changelog is below:

Chrome OS 72 is rolling out now and will be available for all Chromebooks over the next several weeks.