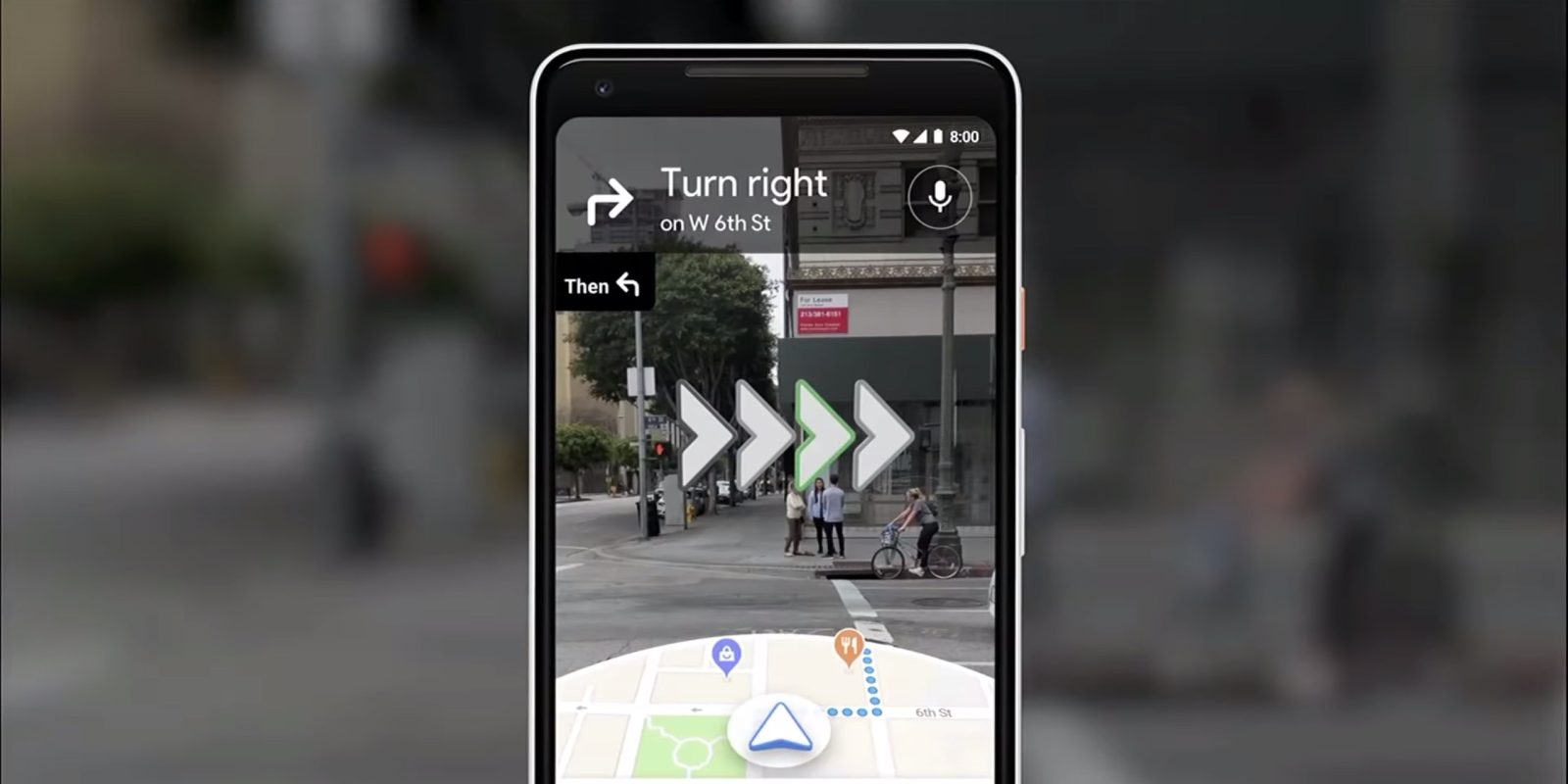 While real-time Google Lens was the big augmented reality announcement at I/O 2018, another exciting in-development feature was teased. Google Maps is working to leverage the camera to overlay walking directions, business listings, and other helpful guides. A first look today details the interface and that’s it coming first to beta testers.

The Wall Street Journal had hands-on time with the upcoming AR navigation feature. In Google Maps, locations will feature a new “Start AR” button — alongside the traditional “Directions” — that will launch the interface shown off at I/O.

Most of the screen is a live camera view, but the bottom third is a circular window that shows a traditional overhead map view with your route. Similar to ARCore-powered experiences and Lens, users first have to move their phone around so that the camera can recognize objects with colorful dots denoting recognition progress.

The WSJ observes how “the camera seemed to recognize some landmarks and realize where it was, with remarkable precision.” As detailed at I/O, Google is leveraging what it calls a Visual Positioning Service to look for landmarks — courtesy of Street View — to “estimate precise position and orientation.”

A moment after the app found me, a set of bold, can’t-miss-’em 3-D arrows appeared on my phone screen, hovering in the middle of the street. The arrows pointed right, so I headed right. That’s when a rectangular blue sign appeared, floating above the sidewalk: 249 feet until my next turn. At the corner, the arrows again pointed right, and down the street a phone booth-size red pin marked my destination. It was as if Maps had drawn my directions onto the real world, though nobody else could see them.

Everything from floating place markers to arrows and pins are animated whimsically and in a comically large fashion to get your attention.

Google shared several qualifiers about the feature. For one, it is meant for walking directions and not to be used while driving, due to possible safety distractions. The WSJ found that the AR navigation feature was aggressive at conserving your phone’s battery life and data usage. Lowering your phone, will launch the standard map, while the screen automatically darkens after a period of time.

The company also laid out ideal use cases, like well-hidden alleys or complicated intersections. At this stage, Google is not advocating that this be the “primary way you get around,” but rather something that integrates to your usual commute.

Google is making AR navigation available first to Local Guides that are prolific at providing reviews, adding photos, and updating information in Maps. Beyond this trusted tester community, Google did not specify a wider availability timeline, heavily emphasizing that more testing is required.