The Sony Xperia 1 is a bit of a mystery, we were unable to get to grips with it after it was officially unveiled at MWC 2019. Now thanks to an Amazon US listing, we’ve got an indication of the pricing at least — which is pegged at $999 (via XperiaBlog).

That’s quite the price-tag for a Sony device, especially a handset that is taking a punt on a 21:9 aspect ratio. We already saw the device go up for UK pre-order via the slightly sketchy e-retailer Clove for £849.

With a little conversion from GBP to US Dollar, the pricing shown on the Amazon US listing does make a little more sense. The listing isn’t without fault though, as it has the Xperia 1 available for pre-order for release on December 31st 2019. Of course, this is most definitely an error as we are expecting the handset to be launched in late May or June 2019.

This is one of the most exciting Sony handsets to be released in recent years. The 4K OLED display and it’s super tall 21:9 aspect ratio should be amazing for those who enjoy watching movies on their devices, but it might not set the industry alight. 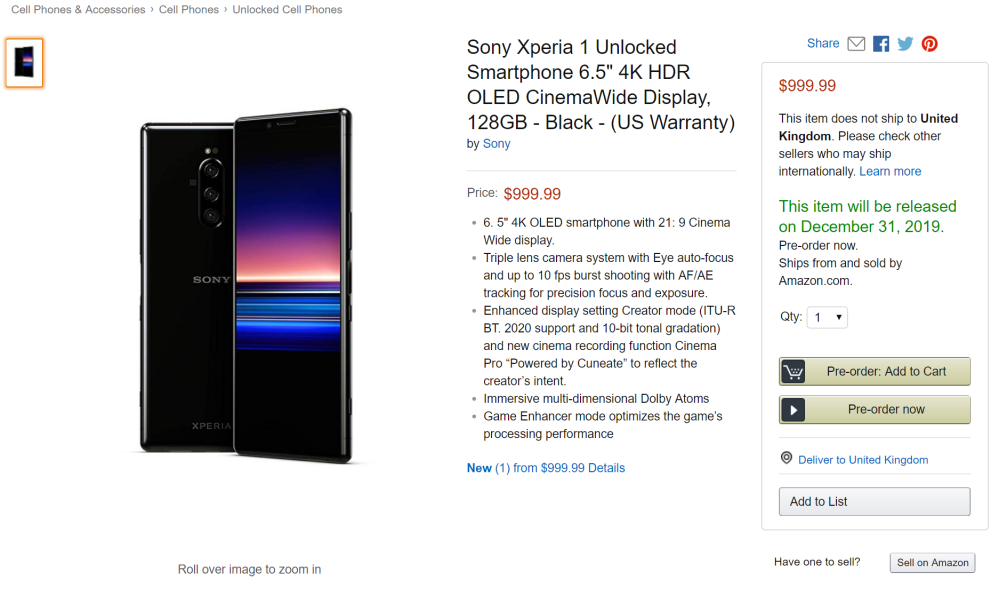 My biggest concern is that despite the undoubted quality it will bring, the Sony Xperia 1 US pricing might actually push people towards the much cheaper Xperia 10 and Xperia 10 Plus.

Are you thinking about pre-ordering the Sony Xperia 1 given the US pricing? If so, why? Or alternatively, if you are not pre-ordering or have no interest in the Xperia 1, let us know in the comments section below.