Late last year, Microsoft confirmed the rumors that they were rebuilding their Edge browser, using open source tech from Chrome like the Blink engine instead of EdgeHTML. This weekend, new screenshots of the Chromium-based Edge (sometimes lovingly called Edgium) have leaked out, giving us a clear picture of Microsoft’s ambitions for the browser.

The screenshots come courtesy of The Verge and Thurrott who have both independently managed to get their hands on a leaked internal build of Microsoft’s Chromium-based Edge. Despite not being a release-ready build, things are reportedly very stable.

In its current form, it looks more like Chrome than Edge, but Microsoft has included a number of visual tweaks that bring the browser in line with Windows 10’s design language instead of Google’s Material Design. This is particularly present on the Settings page, which now looks almost nothing like Chrome.

Another extra feature that many will be pleased to see is that the new Edge has an experimental dark mode in the works, currently hidden behind a setting flag.

Both outlets have confirmed that existing Chrome extensions work as expected in the new Edge, as promised. Microsoft has reportedly even tested the new browser with some extensions and collected the best working ones into an official extensions page.

If you want an extension outside of this collection, with one setting change, you can install directly from the Chrome Web Store. This will give the Chromium-based Edge a firm foundation for adoption. 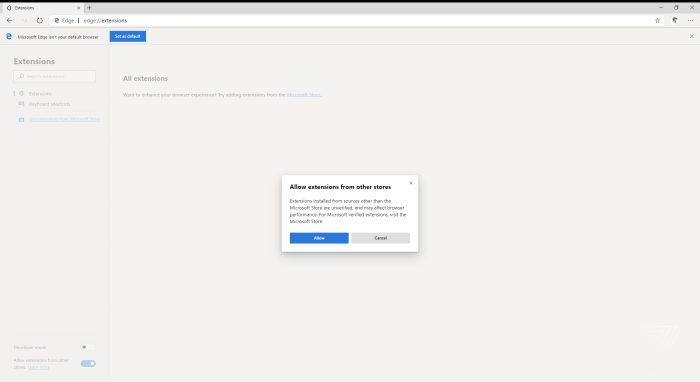 The New Tab page has also been given a total rework, entirely new to both Chrome and Edge. The Chromium-based edge offers options like “Inspirational,” which seems to offer a mountain vista page background, and more traditional ones like “Informational” and “Focused.”

While some features of the Microsoft Edge we know today are not yet available, the overall first impression seems to be that its Chromium-based successor is a more than worthy replacement to the Windows 10 default browser, if not Chrome itself. It should be interesting to see if the final product manages to pull any users away from Chrome, or if this will simply be a better browser experience for those who don’t stray from the default.