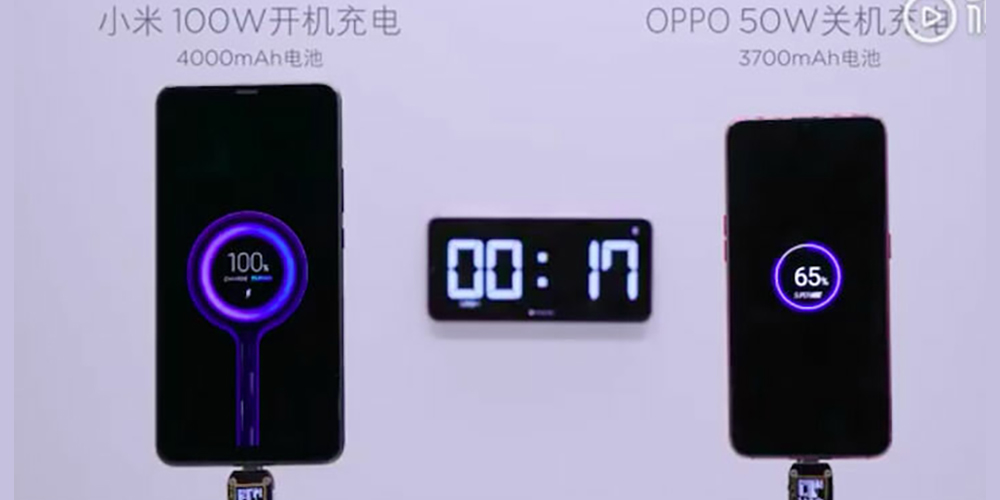 Over the past few years, fast-charging technology has come on leaps and bounds. Xiaomi’s brand new 100W charging tech looks set to leave the rest in the dust if the benchmarks are to be believed.

Huawei, Oppo, and OnePlus all have their own super fast charging technology, but it is being left in the dust by this new 100W charging from the makers of the Pocophone F1 among others.

Xiaomi CEO Bin Lin has shared a video over on Chinese messaging and social platform Weibo showing the super-duper charging tech in action (via 91mobiles). The video shows an unnamed Xiaomi device being charged alongside what we believe is the Oppo R17 Pro.

The unnamed Xiaomi handset appears to have a 4,000mAh battery and blazes past the Oppo even with that 50W SuperVOOC charging that is still no slouch in its own right.

In the video, the Xiaomi handset goes from dead to 100% in a jaw-dropping 17 minutes. During the same time period, the Oppo manages an admirable 65%. The reason this is so impressive? Well, SuperVOOC is technically the fastest charging method for any devices available on the market right now — meaning this is a truly resounding victory for Xiaomi.

Xiaomi has not released any further details on this new 100W fast charging tech or when it might reach upcoming Xiaomi handsets. Either way, who needs a wireless charger when you can go from dead to a full day in less time than 20 minutes…