OxygenOS 9.0.5 is now available for OnePlus 5 and OnePlus 5T users, with this stable update bringing a few minor tweaks and fixes alongside the April 2019 security patch.

Of course, the most notable update is the April 2019 security patch, but there are a few other fixes that will be welcomed by users of the OnePlus 5 and 5T. The OxygenOS 9.0.5 update also helps resolve a few issues that seem to have plagued the in-built Phone app.

Announced on the official OnePlus Forums by Manu J, the 200MB update will bump your device from the January 2019 security patch, right up to the April 2019 patch as well as adding the aforementioned hotfixes for the Phone application.

There are also fixes for a couple of third-party Parallel app problems, including when downloading images using WhatsApp messenger. Also when using the OnePlus gaming mode, users weren’t able to receive video calls in third-party applications — like Skype. The OxygenOS 9.0.5 update fixes that little annoyance. 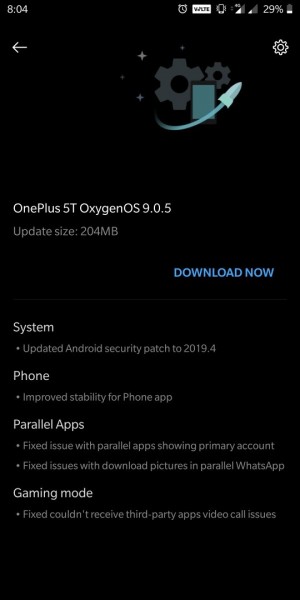 If you are a OnePlus 5 or OnePlus 5T user and having received the OTA, it may be worth heading to your device Settings > System updates and manually refreshing to force the OxygenOS 9.0.5 update to come through.