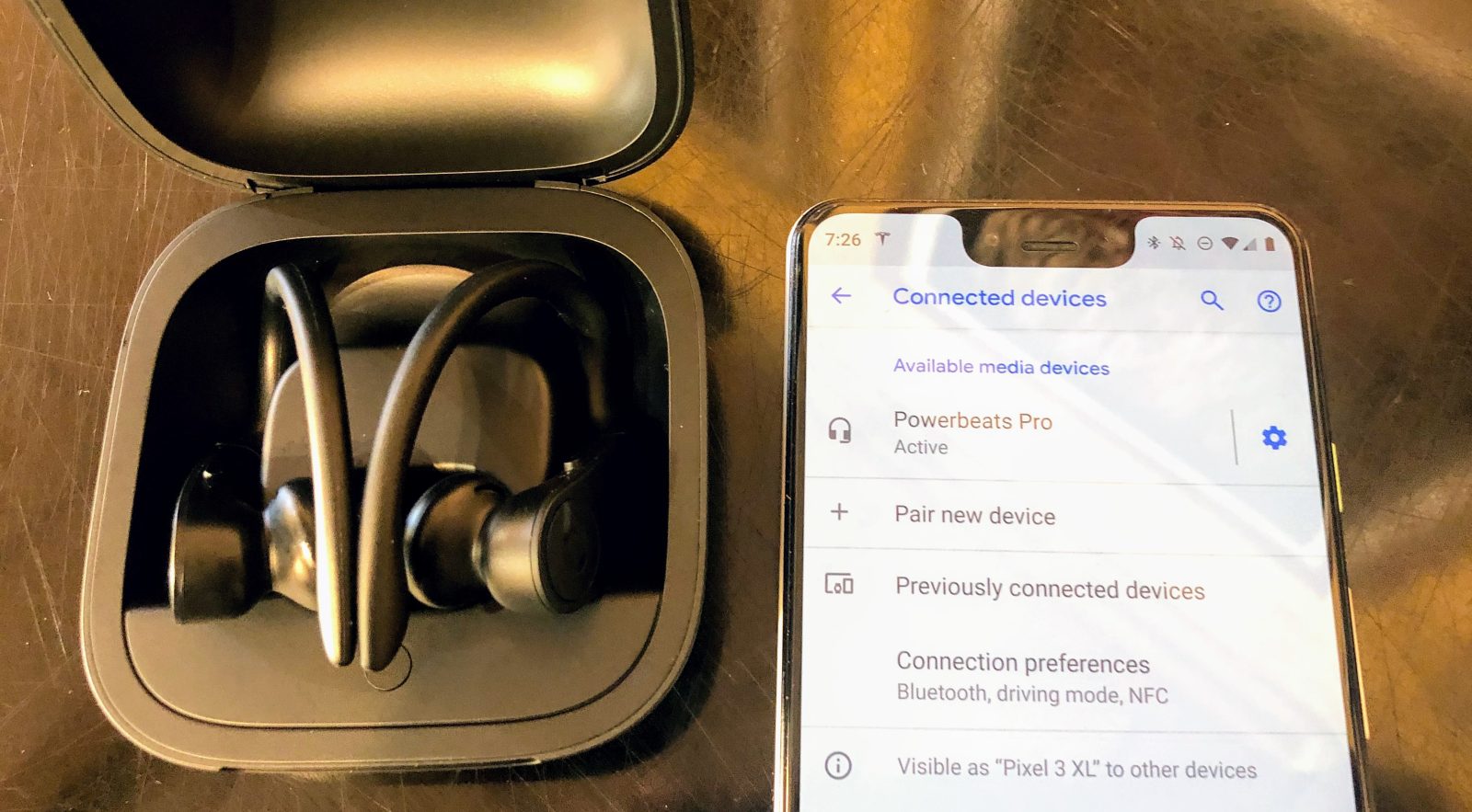 I’ve never been a fan of Beats headphones, even after the company got bought by Apple. The sound has never been as good for my tastes as Bose equivalents, specifically QC35s, for over ear listening. Until the AirPods came out, I had no need for Apple headphones in my dual iOS/Android platform life. But here we are with Apple’s new $250 Powerbeats Pro…

Those little AirPod things reinvented wireless headphones, allowing users a feature-packed weightless experience. While most people get to enjoy the quality sound they produce in the revolutionary package, AirPods almost immediately fall right out of my ears, just like Apple’s wired EarPods before them.

I tried putting little silicone nubs on the tips of the AirPods and those did help them stay in better – and sound better because they were actually snug in my ears. But then I’d have to take the silicone off because they don’t fit in the charger case with them on.

And of course, I’d eventually lose the silicone nubs…and have to buy more.

I eventually gave my AirPods away and went along happily with my Bose QC35s. But it is summer and those ear muffs start to get hot at the gym and when mowing the lawn.

I’ve also tried Samsung’s Galaxy Buds which also fall out almost as easily. Weird ear holes I guess. Google Pixel Buds got such mediocre reviews, I passed on even trying them and their corded setup.

So I decided to try out the PowerBeats Pro and Apple provided a pair for this review. This review is specifically for Android usage and these make a ton of sense for me since I use both Apple and Android phones, specifically iPhone X and Pixel 3XL, in my daily life.

You should check out Zac’s full review and Jeff’s video review over at 9to5mac for an in-depth look at usage for Apple users. Here’s how they work with Android.

As others have noted, the charging case you get is big, monstrous even, compared to the diminutive case that house/charge AirPods or even Galaxy Buds. This is mostly due to the air space needed for the wrap around ear silicone. I think Apple could have done slightly better here with a tighter package/less air and expect to see that smaller size in subsequent releases. Until then, you can fit a few SD cards or other nicknacks in the extra space.

As it stands, getting the buds in and out of the case isn’t obvious but can be learned very quickly. With the case having the size and opening mechanism of a wide wedding ring box, it feels like you just got proposed to every time you put on headphones. 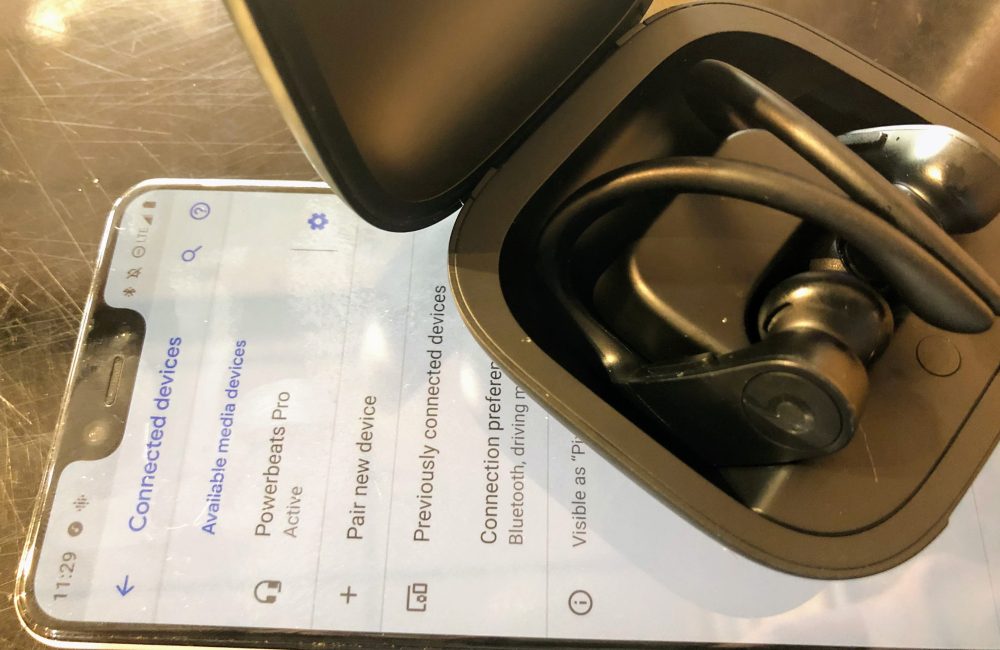 Apple’s MacBooks, and more recently its professional iPads, recently moved to USB-C charging and I’d assumed these would also charge via the same USB-C that charges most of my current devices. However, Apple went with Lightning here which isn’t a big deal for Apple users but for Android users, you’ll need to carry around an extra lightning cable. A nice black cable with USB-A connector comes in the case and works well keeping the case powered up and PowerBeats charged for an impressive 9 hours. I think a lot of Android users aren’t going to appreciate this design decision however and maybe a USB-C to Lightning adapter is in order.

Frankly, Apple might go all wireless charging before it gives up Lightning and also frankly a USB-C Qi adapter is as cheap as a USB-C to Lightning adapter so make the move, Apple.

As I said, I’ve never been a huge fan of Beats’ sound profile but after having heard a bunch of other in ear wireless buds, I have to say that PowerBeats Pro sound as good as any wireless buds I’ve heard, including even some high-end AKG wired buds I’ve used in the past. If we’re talking about pure sound, I’d still always pick the Bose QC35s, especially for noise canceling applications, but for working out, I can’t think of a better option for great sound. As with most Beats products, the bass is well represented. If there’s a complaint on my part, I find the mids lacking compared to what feels like a slightly overcompensating high end. YMMV. 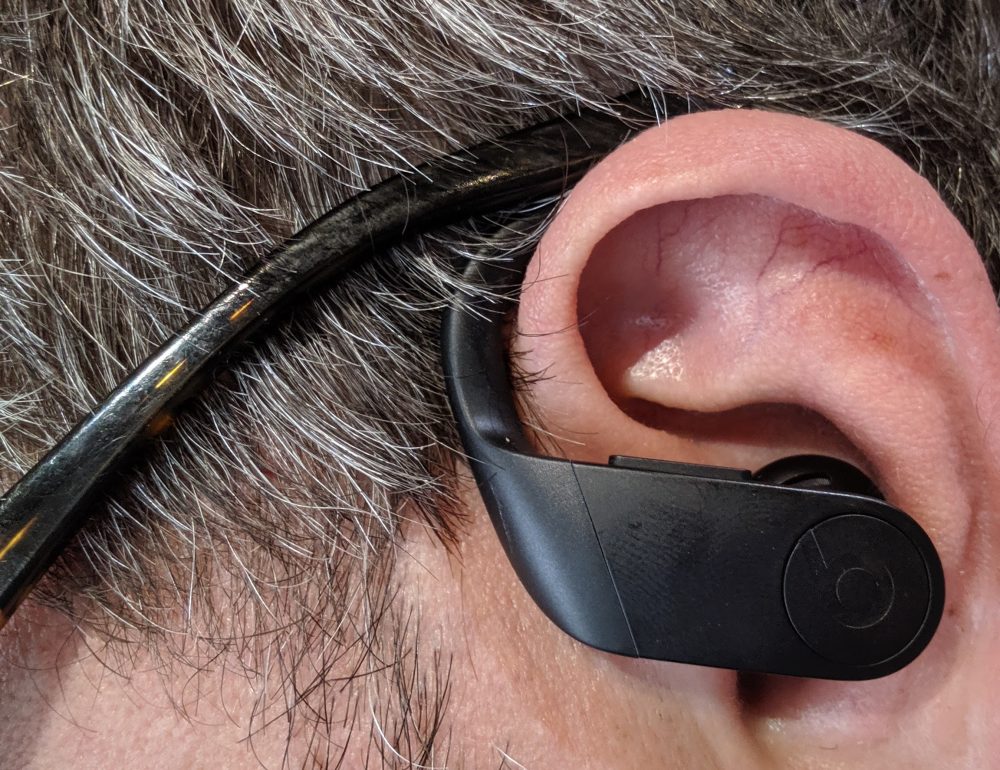 I couldn’t be more impressed by how the PowerBeats Pro disappear, weight-wise, seconds after putting them on. In fact, on more than one occasion, I’ve left them on my ears for hours after I stopped listening because I forgot they were there. Because of the wrap around support design, you don’t get the fatigue on the ear holes that you see in other truly wireless designs and I genuinely feel I could wear these all day. The Powerbeats Pro come with four different sized bud tips in the box but somehow the default option worked fine for me. I say “somehow” because apparently, my ear holes are freakish in nature since everything else falls out.

Powerbeats Pros are fantastic for taking a call on the road or on a walk. In fact, for me, this is the best possible solution for mobile calls and instead of looking like a Bluetooth headset a-hole, you look like you are on your way to/from the gym – which is slightly more socially acceptable. They even work fine with my reading glasses above) or a bike helmet. 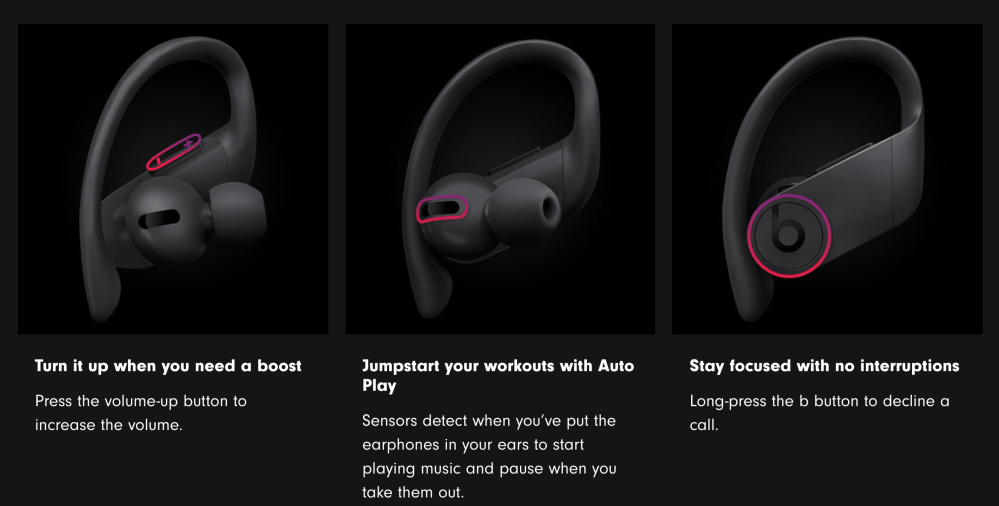 The volume control location isn’t obvious but it is easy to learn with a rocker-style button. The “b” button stops and starts music, and you also have further controls with a long-press declining calls or activating Google Assistant or Amazon Alexa. A double-click on one of the Beats buttons will skip tracks forward with a triple-click skipping backwards.

There are a few downsides to these and one, in particular, could be said to be “by design” from Apple because they obviously would prefer you use these with iOS.

After about 2 weeks of usage, I’m hooked on Powerbeats Pro. And that’s not just when using iOS because I’m also finding I use them as often on Android. I still prefer my QC35s for pure sound and plane travel but the lightweight, design, great sound, and them actually not falling out of my ears into the water fountain make Powerbeats Pro great for workouts, mowing the lawn, or other on the go activities.