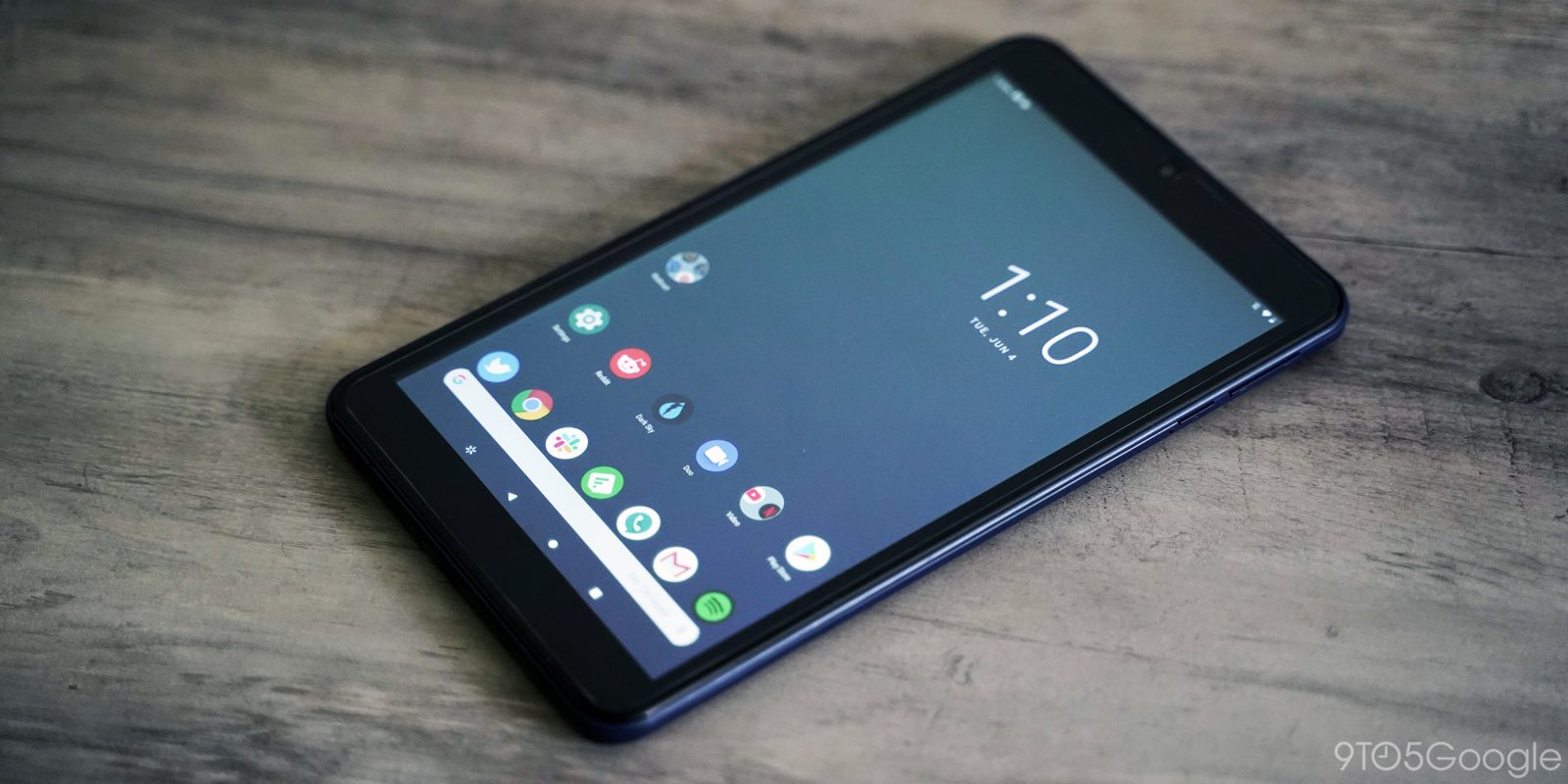 Cheap Android tablets are everywhere, and they’re largely garbage. However, with Amazon’s $50 Fire Tablet on the market, there’s at least one decent option to compete against. Recently, Walmart debuted its own cheap Android tablets, and I’ve been checking one out in person for the past few days. Here are some quick thoughts on why it’s a halfway decent alternative to Amazon.

Not a total travesty

Cheap tablets are never all that impressive in the hardware department, but Walmart has done a fine job with these Android tablets. I’ve been using the 8-inch variant of the device, and the tablet is comfortable to hold, has plenty of grip thanks to the textured back, and has a nice amount of weight to it.

The entire build is, of course, plastic, but it’s not nice in the way the Pixel 3a is. You can feel the price of the tablet in its build, and the screen doesn’t help matters. We’ll talk about the display itself in a moment, but the glass on top is not great. There’s no oleophobic coating here at all, and the plastic screen protector the device ships with feels “sticky” in general use.

Hardware on the Onn Tablet isn’t great, and microUSB for charging doesn’t help

In contrast to the Fire Tablet or even the old Nook Tablet, Walmart’s Android tablets feel slightly behind the competition on the hardware front. The only advantage I’ll give to Walmart is that its tablet hardware feels less susceptible to damage. 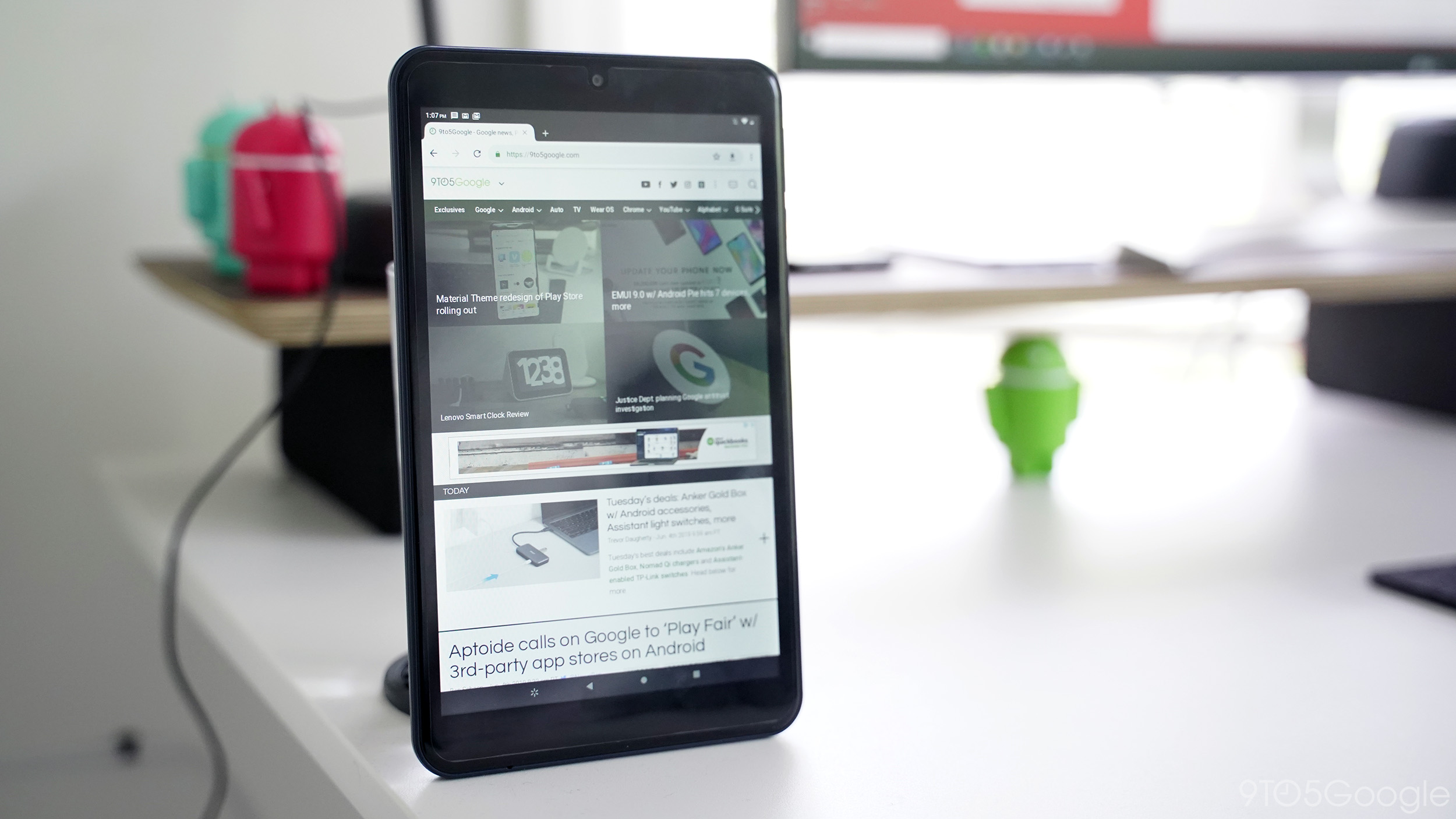 Acceptable, but missing a crucial feature

In both the 8-inch and 10-inch variants, the display on Walmart’s tablets is just over 720p, landing at 1280×800. In 2019 when we have 4K displays on smartphones, that’s not exactly impressive. However, these displays are quite decent. After all, you’re getting more resolution compared to the Fire Tablet which is a measly 1024×600.

As you’d probably expect from the display on a $64 tablet, viewing angles aren’t perfect, and colors are a bit off too. Personally, I found it’s fine for reading before bed or browsing Reddit, but the display’s (lack of) quality is especially noticeable in videos. 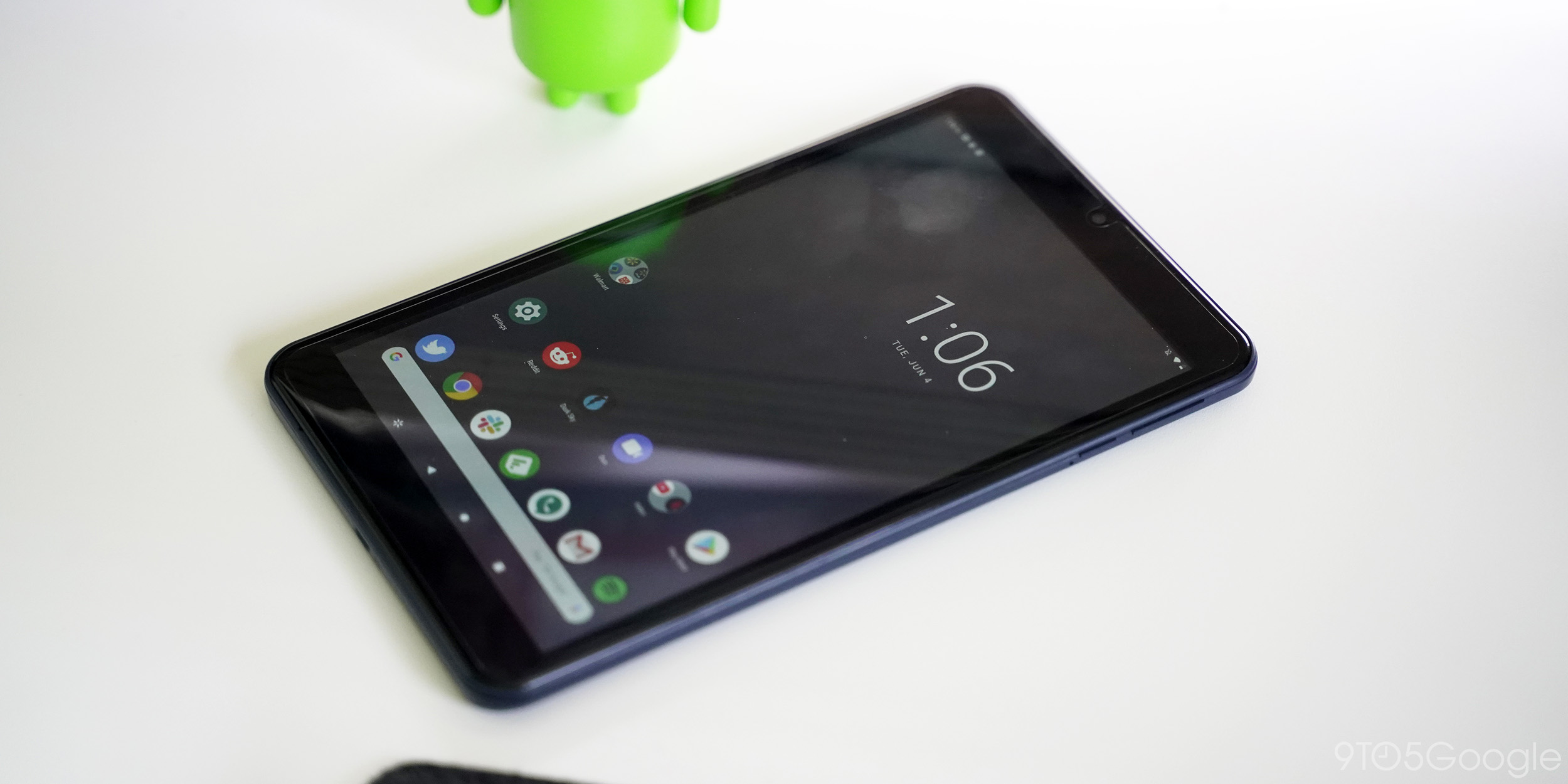 However, my biggest complaint here is actually a feature that the display is missing. Walmart’s Android tablets lack the hardware needed for auto-brightness. You’ll have to manually adjust the brightness slider every time, which is especially annoying in a dark room. Notably, the display doesn’t get super dim either, so you’ll probably want to limit how much you use it in a dark room.

Here’s the question that makes or breaks a budget tablet — is the software actually usable? With Walmart’s Android tablets, the answer is a mixed bag.

As far as the Android version you’re getting, this is actually great. Out of the box the Onn tablet has Android 9 Pie and it’s a clean version of the OS. There are almost no major UI changes here and bloatware is kept to a minimum. However, that bloatware has one pretty annoying aspect. 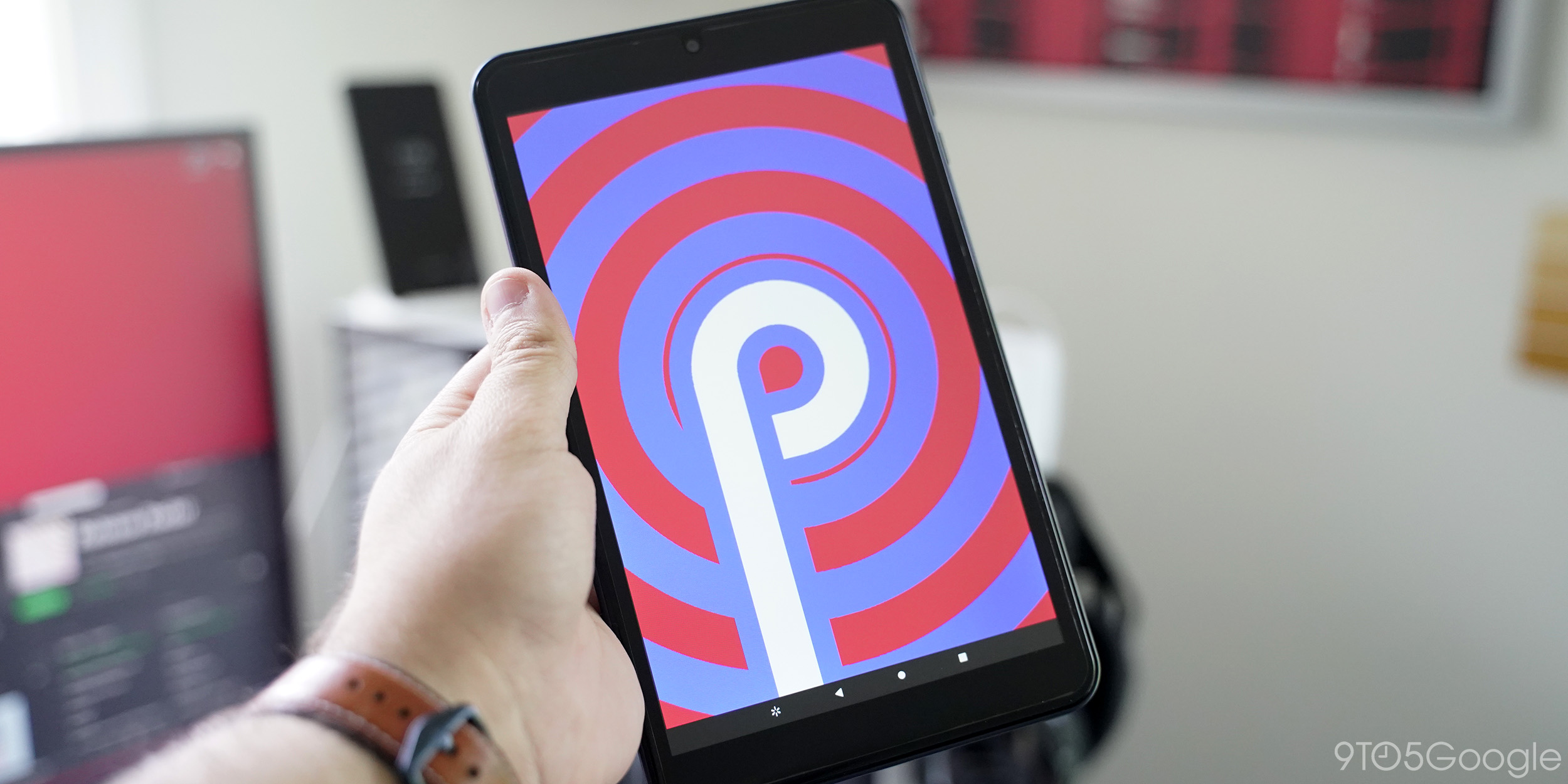 There are only 5 apps (not including the camera app, also cameras are predictably awful) pre-installed outside of the usual Google suite. The various Walmart apps don’t feel like they get in the way, except for the dedicated button in the navigation bar that opens up a folder of them. I can’t understand why anyone thought this would be remotely useful, but it sits there nonetheless. It doesn’t hinder the use of the tablet, but it’s annoying and as far as I can tell, there’s no way to disable it. For many, I’m sure this is a deal-breaker.

As for the performance angle, it’s not great. Running on an undisclosed chipset and with just 2GB of RAM, the performance was never going to be great. However, for $64, I think it’s capable enough for basic tasks. In my case of browsing social media and reading, it works just fine although it tends to stutter when jumping between apps. While I don’t have a Fire Tablet with me to compare directly, it doesn’t feel all that different from what Amazon’s cheap tablet offers. I’m not hopeful about how it will age, though.

History isn’t on its side

Security and updates are something I always question on cheap Android tablets. It’s good that Walmart put Android Pie on these tablets out of the box, but there’s no good sign that updates will be regular. During set up, I was given an OTA which brought the January security patch up to April.

However, I don’t have high hopes for the future in this department. It feels unlikely these tablets will get more than a couple of updates per year if that. Plus, the security issues with Barnes & Noble’s Nook Tablet which aimed for the same price range don’t instill any confidence. 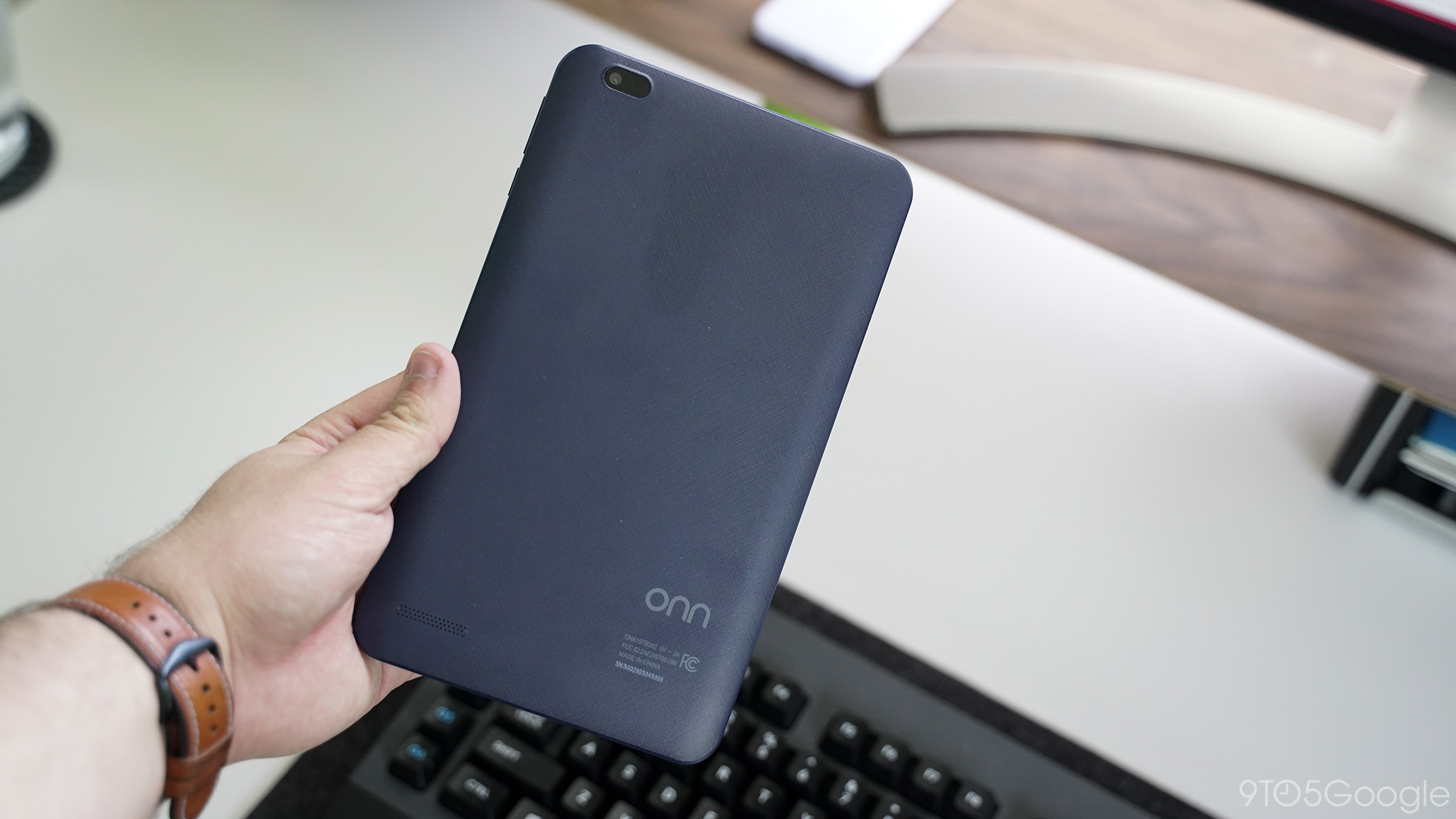 Is it a Fire Tablet killer?

No, I don’t think Walmart is going to kill the Fire Tablet with this product.

Walmart’s Android tablets have a questionable future in terms of how they’ll get updated and also how they’ll perform in the long term. Amazon has a proven track record with its inexpensive tablets here, and it’s a good one too.

However, I think Walmart has a place in the market with these self-branded tablets. They run a version of Android that’s going to be more familiar to users with Android smartphones, and with Play Store access, the app war between these options is immediately in Walmart’s favor.

I don’t think anyone should plan on buying these tablets for getting work done, though. They’re just not meant for that. Instead, I think these Android tablets are good for a gift for the kids or maybe a tablet for grandma to use for reading or watching the occasional video. At $64 for the 8-inch model and $79 for the 10-inch model, the price seems about right for that use.