Google Stadia pre-orders are now live with pricing for the Founder’s Edition starting at $129.

For those wondering what’s in the actual box, you’ll simply get the aforementioned Stadia controller and the Chromecast Ultra. If you care a great deal for the size, the Stadia controller measures in at 6.4-inches by 4.13-inches — a sizeable but comfortable gamepad comparable to others already on the market.

Those who pre-order will also get access to Destiny 2: The Collection, which is playable upon launch. We are not sure if it will be playable though if your subscription lapses after the initial three-month trial period. The Google Store does state that: “If you choose to cancel Stadia Pro, you can play the games that you’ve already purchased on Stadia Base without a subscription,” but it is still not clear if Destiny will be classed as a purchased title within a player game library.

Should you choose to pre-order, you’ll be given confirmation shortly before release; allowing you to claim you unique online Stadia username before anyone else. This could prove to be the draw for many gamers that want to be among the first on the platform with the most unique player tags.

There is no solid release date other than ‘November 2019’. We do expect further details to emerge between now and the launch of the potential Pixel 4, which will no doubt allow Google to talk up the power of the cloud gaming platform. 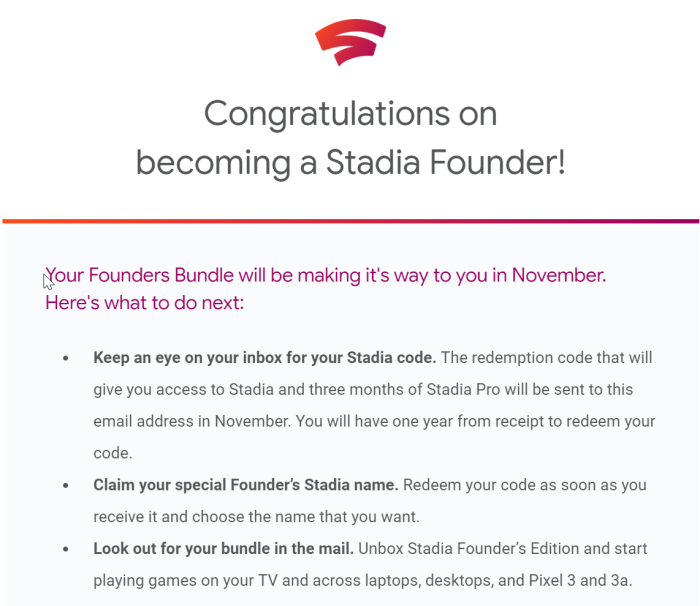