YouTube is arguably the most popular music streaming service thanks to its free nature. Views on videos are a big popularity metric, but the practice of being able to buy higher counts through ads is leading YouTube to reportedly reevaluate views and records.

Bloomberg today reported about Indian rapper Badshah and his video “Paagal” garnering 75 million views in 24 hours, but not getting applause from YouTube for surpassing “Boy With Luv” by BTS and Taylor Swift’s “ME!”

At issue appears to be how views for the Bollywood musician’s latest work originated from ads purchased on Google and YouTube. A common practice sees artists and labels buying advertisements that direct watchers to the video, thus increasing the count.

When releasing a new single, major record labels will buy an advertisement on YouTube that places their music video in between other clips. If viewers watch the ad for more than few seconds, YouTube counts that as a view, boosting the overall total. Blackpink and Swift, among others, have done it. Badshah just took it a step further, people familiar with the matter say. 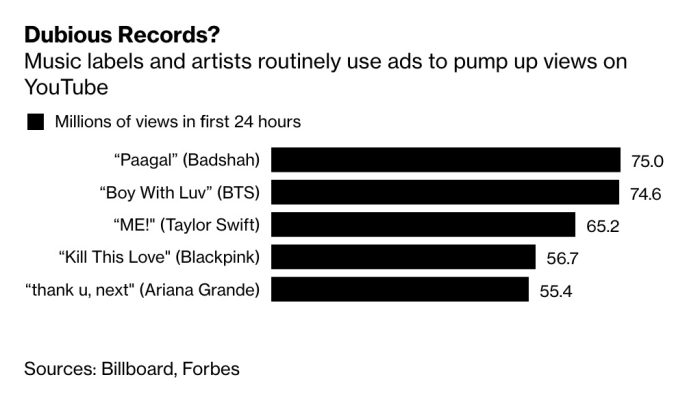 A related factor is how online ad rates are cheaper in India compared to the rest of the world. As one of the largest ad providers, Google has conflicting interests on whether to count views derived from ads. While profitable, doing so might lessen the status of YouTube views.

According to Bloomberg, YouTube is going to reevaluate views and what constitutes a record given how this practice is going to continue, if not increase. In the case of the Indian example, there are additional accusations of YouTube enforcing a double standard by not publicizing the record-breaking milestone.

The practice creates doubts about the real popularity of these clips and reveals some of the murky ways in which artists and their labels promote their music—especially in emerging markets.