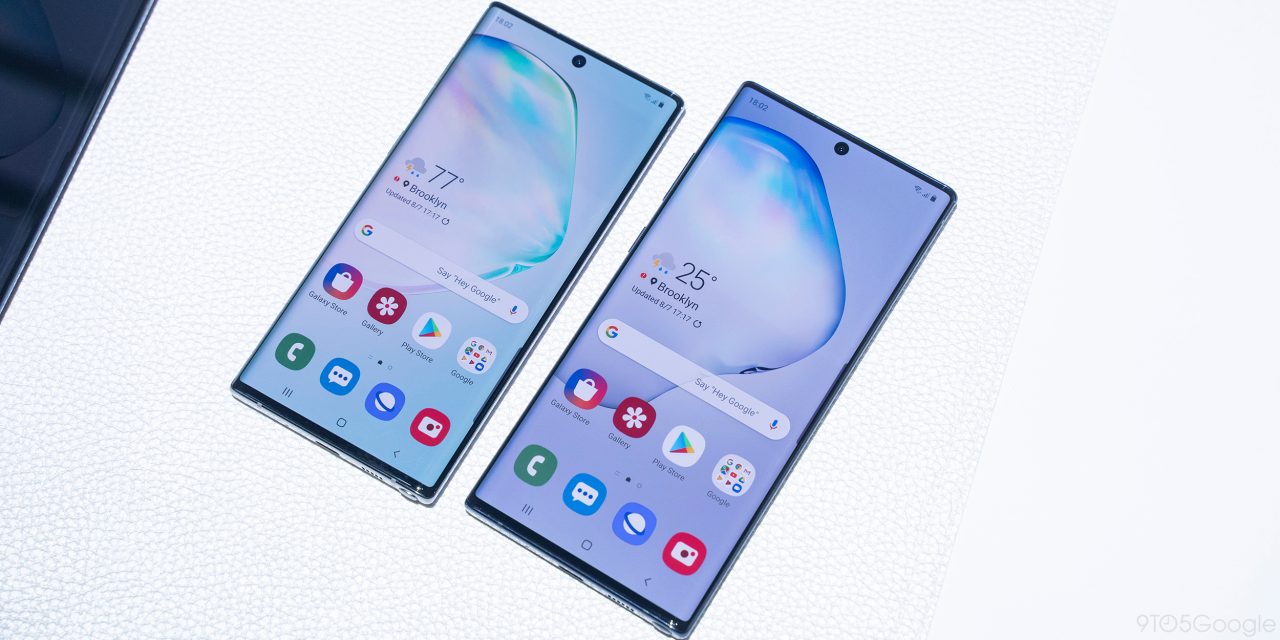 The Galaxy Note 10 series went official yesterday, and there was a ton of information at Samsung’s Unpacked event. Here are a few big Galaxy Note 10 tidbits you might have missed, including its new stainless steel frame.

Update: Nope, the Note 10 doesn’t have a stainless steel frame. The Verge confirmed with Samsung that a promo video, since replaced, was completely wrong regarding this point. Like Samsung’s other phones, the Note 10 has an aluminum frame.

One big change about the Galaxy Note 10 that Samsung never mentioned on stage is that the frame of the device is now made from stainless steel. We’ve seen this on other flagships, notably the iPhone X/S, but it’s a first for Samsung.

While I didn’t really notice the difference during my brief hands-on time with the Note 10. As SamMobile also pointed out, this was confirmed in a Samsung promo video.

There’s no headphone dongle in the box

Samsung removed the headphone jack from the Galaxy Note 10, much to the disappointment of its fans. Traditionally, phone manufacturers include a dongle to make up for that loss, but Samsung, surprisingly, isn’t doing that.

While there won’t be one in the box, Samsung is selling an adapter in its online store for a whopping $15, making it considerably more expensive than similar dongles from Apple and Google. Presumably, those USB-C dongles will work with Samsung’s device.

Samsung’s launch event for the Galaxy Note 10 was packed with information, but one thing that was never even mentioned was Bixby. The digital voice assistant was showcased during some looping promo videos before the event, possibly even with a new voice, as Max from XDA mentioned to me.

During the actual presentation, though, Bixby was never mentioned, as the Verge noted. That’s a stark contrast from the Note 9 launch event, where Bixby was a central part of Samsung’s presentation. Another word that wasn’t mentioned? Android.

The power menu is now a software button

With the Note 10, Samsung “simplified” the design by only going with two buttons. Along the stainless steel frame of the Galaxy Note 10, you’ll find just two buttons on the left edge: the volume rocker, of course, and what was previously the dedicated Bixby key. Now it pulls double-duty as the power button first, Bixby button second. 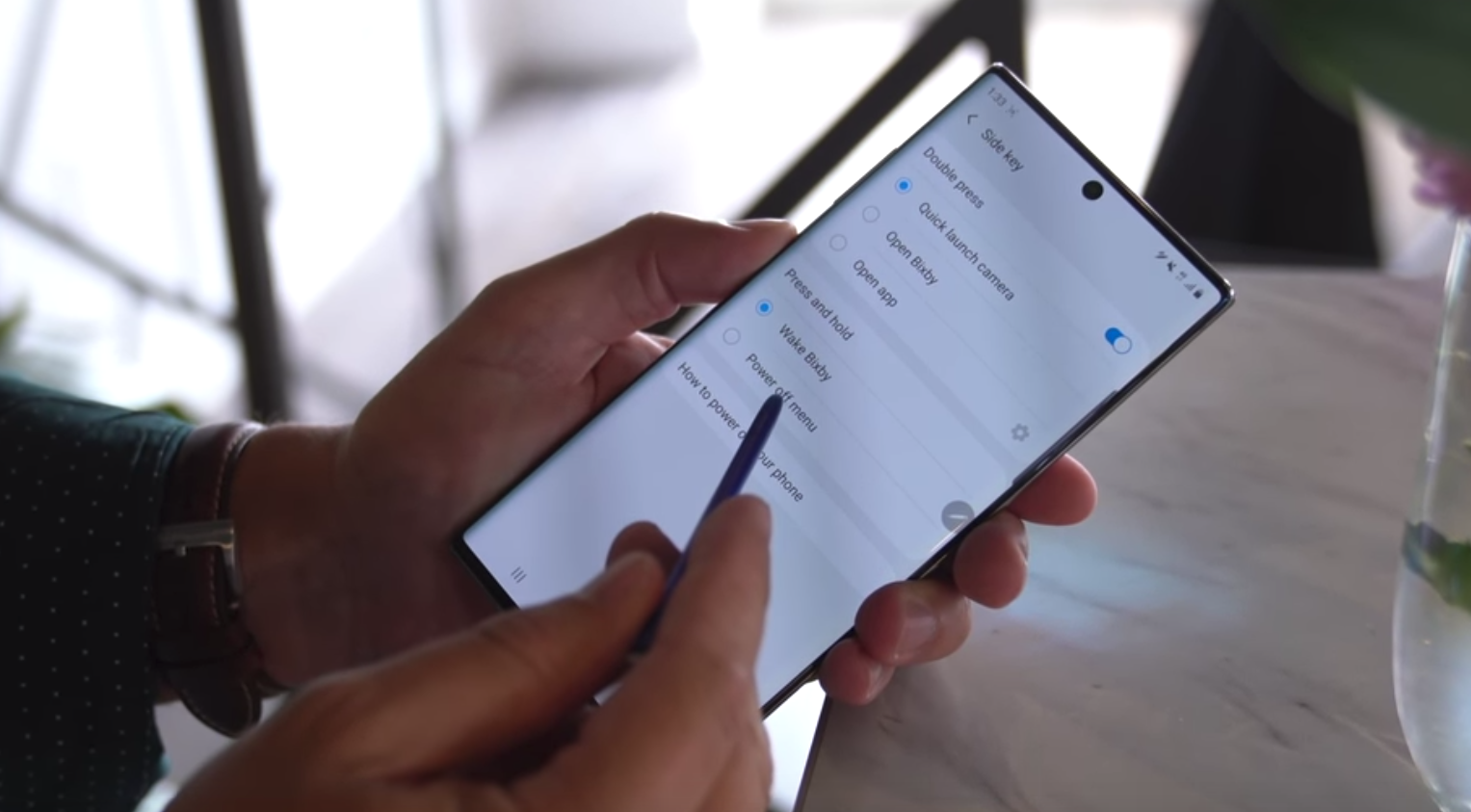 A tap acts as the power button while a hold triggers Bixby. That means, by default, the power menu is moved to a software button in the notification tray. Thankfully, Bixby’s functionality can be completely disabled on the Note 10, restoring the power menu’s traditional functionality as shown in the above still from MrMobile’s hands-on coverage. As SamMobile further explains, presses of the button can also be customized.

Virtual reality used to be something Samsung was pushing, but this year, it wasn’t mentioned onstage. That shouldn’t be a surprise, as the headset has taken the backseat for the past several events, but once again, Gear VR isn’t supported by the Note 10. The same applied to the Galaxy S9, so this isn’t unprecedented.

I just got confirmation from @Samsung. No version of the #Note10 is compatible with the GearVR. Not a huge loss tbh. Standalone is where it's at. #VR

Samsung ditched the headphone jack for battery life and haptics

The lack of a headphone jack has been a sore point of the Galaxy Note 10 for a lot of users, and Samsung’s justifications for removing it isn’t really helping. Speaking to the Verge, a Samsung representative gave a couple of reasons why the jack was removed.

For one, Samsung says that the extra space freed up by the jack made space for a little bit more battery. Extra battery is a good reason, but the measly 100 mAh Samsung says it increased things by is hardly 2%-3% of the total capacity.

Another benefit Samsung says this offered was better haptics. This isn’t because it made space for a new motor, but rather the lack of a “hollow cavity” improves the feeling of the current haptics. I guess the S-Pen’s silo just doesn’t count.

Call of Duty: Mobile will be preloaded

As mobile gaming gets more impressive, bigger titles are arriving. One game many are excited to see coming is Call of Duty: Mobile, and the game was briefly shown during Samsung’s presentation. SamMobile was able to confirm that the game is preloaded on the Note 10 and Note 10+, but it’s unclear if that will apply to all regions.

There will be a native way to stream PC games

At some point in the future, Samsung is going to be implementing a native way to stream games from your PC on the Galaxy Note 10, much like Steam Link already does. Samsung hasn’t provided a timeline for when this will arrive aside from “later.” PlayGalaxy Link is shown off in an official Samsung video below.

There’s a third microphone for the ‘zoom-in’ audio feature

Another new feature for Samsung is a “zoom-in” functionality on audio while recording video. Apparently, this feature requires an additional microphone, and it’s at the top of the phone.

SamMobile originally thought this was an additional speaker, and many assumed it was an IR blaster. However, Samsung later confirmed that it was a third microphone, explaining that it’s larger for the sake of that feature.