The wait for Android 10 on the Galaxy S10 is nearly over, as the OneUI 2.0 beta is now set at “coming soon” to the flagship device family.

Naturally, the OneUI 2.0 beta is set to come first to Samsung’s native South Korea (via @jtinseoul), but we expect a wider rollout like with Android Pie and the Galaxy S9 last year. At this stage, it doesn’t appear as though the Note 10 will be part of the beta programme — although we’re sure that this will change once we see a wider worldwide rollout.

[Update 10/09]: As per XDA’s Max Weinbach, the teaser image has now been spotted in the US, which is great news for those of you hoping to get enrolled on the One UI 2.0 beta programme once it becomes available.

It looks as though those on T-Mobile will be able to join the beta along with anyone who owns an unlocked version of the Galaxy S10e, S10 or S10+ — still no information for those rocking the S10 5G though.

More information for the US One UI 2.0 beta. pic.twitter.com/k1p45RmYSS

Hopefully, the wait isn’t too long, as we’re sure many Galaxy S10 owners out there are itching to get to grips with Android 10 very soon.

We’ve already seen a leaked developer build running on the device, which gave us a little taste of what to expect. The rest of the tweaks and enhancements that Samsung will no doubt add are a bit of a mystery at this stage. The entire Galaxy S10 family is also eligible to trial the latest Android build, which is fantastic news for those with the smaller Galaxy S10e — who are not left out. If you happen to have the Galaxy S10 5G, though, you will have to wait a little longer. 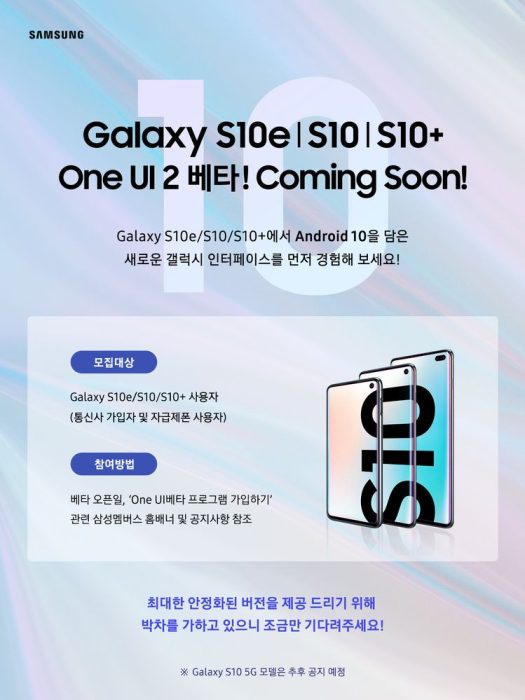 Registration for the OneUI 2.0 beta will require the Samsung Members app. We imagine that slots will be limited, meaning it will take fast fingers and quick reactions to get enrolled before all the slots fill once the beta eventually does open up.

Samsung fans in Korea will no doubt have a little bit longer to get to grips with Android 10 before we get localized versions. Although we do believe that we will see selected nations get access toward the end of October, as per previous reports.

It’s worth noting that this isn’t a full rollout by any means. We might not see the full OneUI 2.0 OTA until early 2020, but the early signs are very promising. The hype train for Android 10 on the Samsung Galaxy S10 is now most definitely very real.