Back in September, Google announced autoplay videos in the Play Store. There is now an option to turn off that annoying automatic behavior.

Google Play’s autoplay videos mostly reside in the dedicated “Games” feed. There appears to be at least two formats, and not all of them are user controllable. A “Game spotlight” section is currently showcasing Call of Duty: Mobile. The carousel of promotional graphics is led by a video that starts playing the moment you scroll down to it.

Another example might be an endless “Suggested for you” carousel further down that’s just one app video after another. It slightly differs in that autoplay does not start immediately and waits a few seconds to load as indicated by a pulsating play button. Once initiated, there’s a sound indicator in the bottom-right corner that will unmute audio and overlay standard YouTube controls when tapped.

Here, Google notes how “You can control video autoplay in Settings.” Grouped under “General,” “Auto-play videos” has three options with the second selected by default. However, even when autoplay is turned off, the first COD example keeps playing, but it’s more akin to a GIF than high-res video.

The Play Store’s ability to turn off autoplay video is live with version 17.9.17. Widely rolled out, it first appeared for some users last month as part of an A/B test. 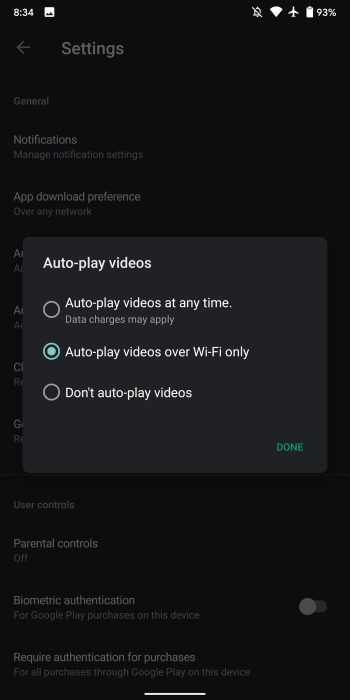