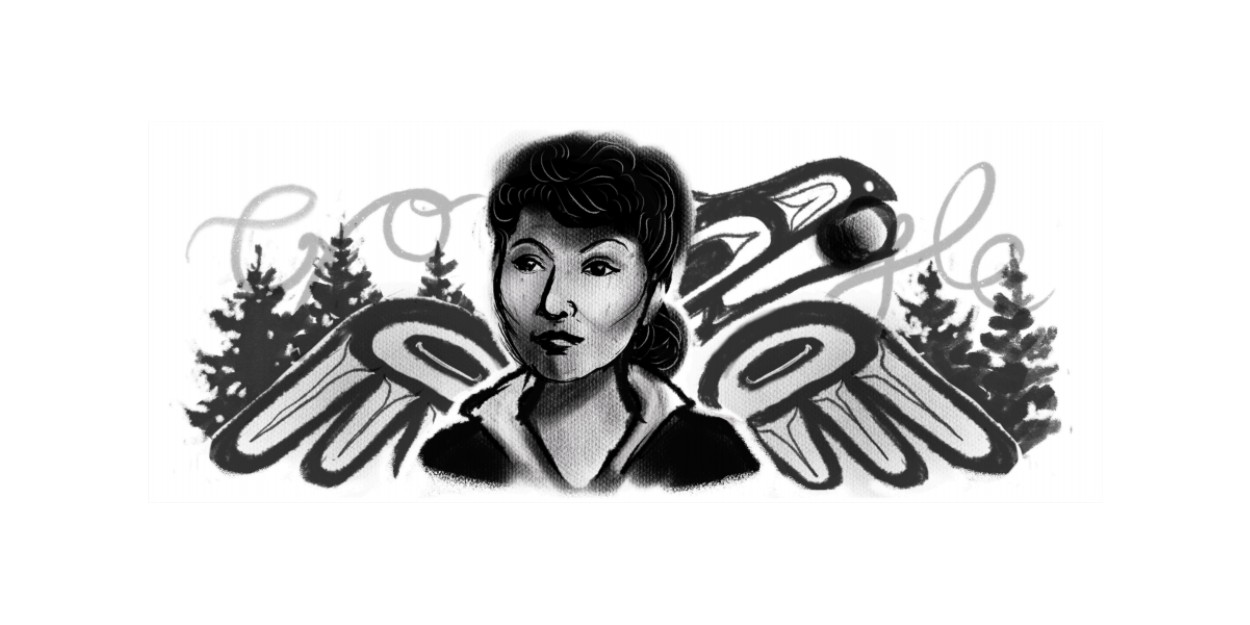 Google has replaced their homepage logo with a Doodle honoring Elizabeth Peratrovich, an Alaskan Native and civil rights activist responsible for the first anti-discrimination bill to pass in the United States.

Elizabeth Peratrovich was born on July 4, 1911 in Petersburg, Alaska with the Tlingit name Kaaxgal.aat as a member of the Lukaax̱.ádi clan of the Raven moiety. Peratrovich faced a difficult childhood having been orphaned at a young age and later adopted. One of her passions in early life was the pursuit of education, which continued through college.

Unfortunately, her life’s difficulties continued into adulthood, as Elizabeth Peratrovich and her husband Roy were both frequently discriminated against for being Native Alaskans, creating a struggle in securing housing and even in finding businesses that would serve them. In one egregious instance, the family encountered an inn with a sign stating “No Natives Allowed.”

On this day in 1941, Elizabeth Peratrovich petitioned the governor with a letter and gained his support for the Native Alaskan cause. An initial version of an anti-discrimination bill, written in part by Elizabeth and Roy Peratrovich, was rejected by the Alaskan government.

In 1945, after years of continued efforts, the Alaskan government attempted to pass a second anti-discrimination bill. Before the votes were cast, Elizabeth Peratrovich was able to give an emotionally charged speech that was credited with clinching the win for the bill that day. The bill helped more than just Alaskan Natives, however, offering “full and equal accommodations, facilities, and privileges to all citizens in places of public accommodations.”

Today’s Google Doodle is far from the first time that Peratrovich has been celebrated, even in recent memory. In honor of her great deeds for the betterment of Native Alaskans, the state of Alaska celebrates Elizabeth Peratrovich Day each year on February 16, the same date that the bill was originally passed. Additionally, the US Treasury released a new $1 coin earlier this year which featured Peratrovich on the reverse side.

In a Q&A over on the Google Doodle Blog, guest artist and fellow Tlingit woman Michaela Goade has pointed out the inspiration behind some of the finer details of the Elizabeth Peratrovich Doodle. Goade also shared a few early alternate designs for the Doodle.

I drew quite a bit of inspiration from different sources for this Doodle. When drawing Elizabeth, I was particularly inspired by her famous testimony given to the Alaska Territorial Legislature in 1945. I wanted to show her in action as she delivered her powerful speech. Additionally, Elizabeth belonged to the Lukaax̱.ádi clan (a Raven Moiety), so I knew I wanted to include Raven and incorporate elements of traditional Formline into his design. In Tlingit creation stories, Raven was the one who brought daylight to the world. In the Doodle, Raven is holding the sun, which is a reference to this creation story. Similarly, Elizabeth was also a bringer of light to the world. Lastly, the ocean and tree imagery is a reference to our traditional homelands here in Southeast Alaska.