After big moves by Apple & Spotify, what is Google’s plan for podcasts? 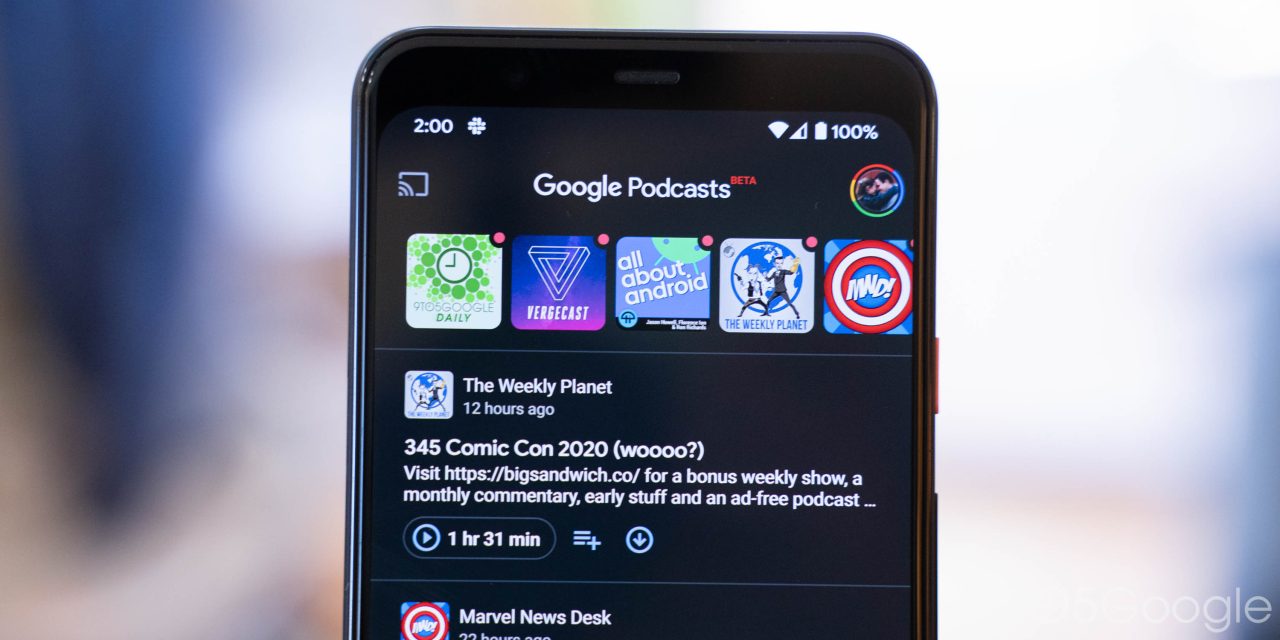 Activity and investment in the podcasting industry is currently at an all-time high after Facebook, Apple, Spotify, and others detailed their latest efforts last month. One major player that has yet to respond with new plans of its own is Google Podcasts.

Google relaunched its podcast offering in 2018 after a failed start two years prior that involved surfacing shows and episodes in Play Music. The current effort is much more of a dedicated experience and closely aligned with Google Search and, by extension, Assistant.

Google Podcasts launched on Android three years ago and then came to the web, as well as Search results, in 2019. An iOS app was introduced last year as the web client became more full-featured. The last major announcement came at the tail end of 2020, when the app gained support for private RSS feeds, while the past few months have seen a redesigned Now Playing screen and the ability to better customize (and block) recommendations. Meanwhile, recent weeks have seen the founding product manager rise up to focus on Search features for desktop/laptop, while its product lead left Google for payment company Stripe. The former’s move coincided with the broader reshuffle of the Search organization.

The biggest advantage for Google Podcasts today is its integration with Search. In 2019, as announced at I/O, the search engine began surfacing playable episodes “based on Google’s understanding of what’s being talked about on a podcast.” The company is going beyond episode name and description to index and transcribe.

Soon, you won’t necessarily need the term “podcast” in your search to see episodes, making podcast discovery simpler across Search.

This gives users a natural introduction to Google Podcasts. Meanwhile, on Android, the Podcasts experience is technically part of the main Google app — much like Assistant. Given the pre-installed nature of the Search app, all Android users have a podcast player out of the box to start listening to things they just discovered. You can download “Google Podcasts” from the Play Store, but that essentially places an app icon on your homescreen.

That approach is most similar to how Apple Podcasts is pre-installed on iPhone, iPad, and Mac, while Facebook now has a mini-player in its main app and is building a fuller experience. The path the social media company is taking is similar to Google’s in that it wants to leverage the application that a lot of people already have installed.

Elsewhere in the landscape, Spotify decided to go the old Play Music route by just integrating podcasts into the main music client. Again, this is born out of most people’s hesitancy to download a new app. From anecdotal observation, I’ve seen people new to the world of podcasting just use Spotify — over Apple Podcasts — due to familiarity since it’s already their streaming service of choice.

For Google, the task is keeping listeners that encounter its app through Search. One way it achieves that is through cross-device integration. Play progress is synched throughout the mobile and desktops apps, as well as Smart Displays and speakers. Resuming playback is easy through Assistant voice commands. The Google Podcasts client is one of the simplest apps out there with the main screen being a feed of all your episodes, while “Explore” /search is the next tab over and the last section shows your queue and offline downloads. It’s aimed at those just getting into podcasts and is unencumbered by music or an entire social network.

Going the other direction

Podcasting, by nature of being based on RSS, has always been open. This ongoing boom might change that in the long run. Spotify is leading the charge with exclusive content that can only be listened to in its app with multi-million dollar deals to secure big names and personalities. On the other end of the spectrum, it owns easy-to-use and integrated creation tool Anchor.

Meanwhile, Apple this month is making it very easy for podcasters to start charging for shows and offer exclusive content just for paying listeners. Apple Podcasts Subscriptions leverages the company’s massive payment infrastructure that already has your card details from App Store and iTunes purchases to allow for very straightforward subscriptions. This approach of offering extra or bonus audio for those paying involves uploading that content directly to Apple, rather than RSS.

The Search-aligned nature of Google Podcasts brings a certain level of openness that might differentiate it and continue the open web nature of audio. That said, Google is also in the position to make it easy for podcasters to easily get paid subscriptions. At least on Android, it can leverage the Play Store/Google Pay infrastructure to make sign-ups easy.

When viewing podcasts from a news angle, there’s Subscribe with Google that publishers today can use to make paywalls friction-less by having Google fill-in payment details and keeping you signed-in across devices.

Similarly, it’s hard to see Google investing in original podcasts. The company does not have a solid track record of directly financing content as seen by the pullback from making prestige television and movies for YouTube Originals (in favor of content from existing Creators) and the end of Stadia Games & Entertainment. That said, if Google’s podcasting effort was more closely aligned with YouTube — rather than the open web — things might play out differently.

Again, Google has been quiet about its plan for podcasting in the face of big competing moves. From an industry perspective, the most obvious would be for the company to start supporting paid subscriptions by leveraging its existing payment infrastructure. It would tie-in with Google’s push to help news publishers.

It could also offer another way to monetize podcasts through advertising. YouTube last year announced audio ads to “connect your brand with audiences in engaged and ambient listening on YouTube.” It’s primarily aimed at reaching music fans but could also apply to podcasts given the familiarity of sponsor breaks during episodes.

On the product side of plans, podcast discovery in Google Search could be further boosted by linking to “key moments” like YouTube does today. It would be something for searchers wanting to find a more nuanced answer or discussion about a query.

During the relaunch in 2018, the company talked about how “Google Podcasts will be a launchpad for building an even better podcast listening experience using AI.” The example cited then was automatic subtitling thanks to advancements in speech-to-text to allow audio consumption in noisy areas without headphones, as well as increased accessibility. The feature is easier than ever to implement, but Android already offers Live Caption for all playing media on your device. Another use of that would be to translate content and make podcasts available in more languages.

Overall, Google has a stable foundation with wide access across several platforms. However, in light of increased competition, Google Podcasts has to announce what’s next in the plan sooner than later.