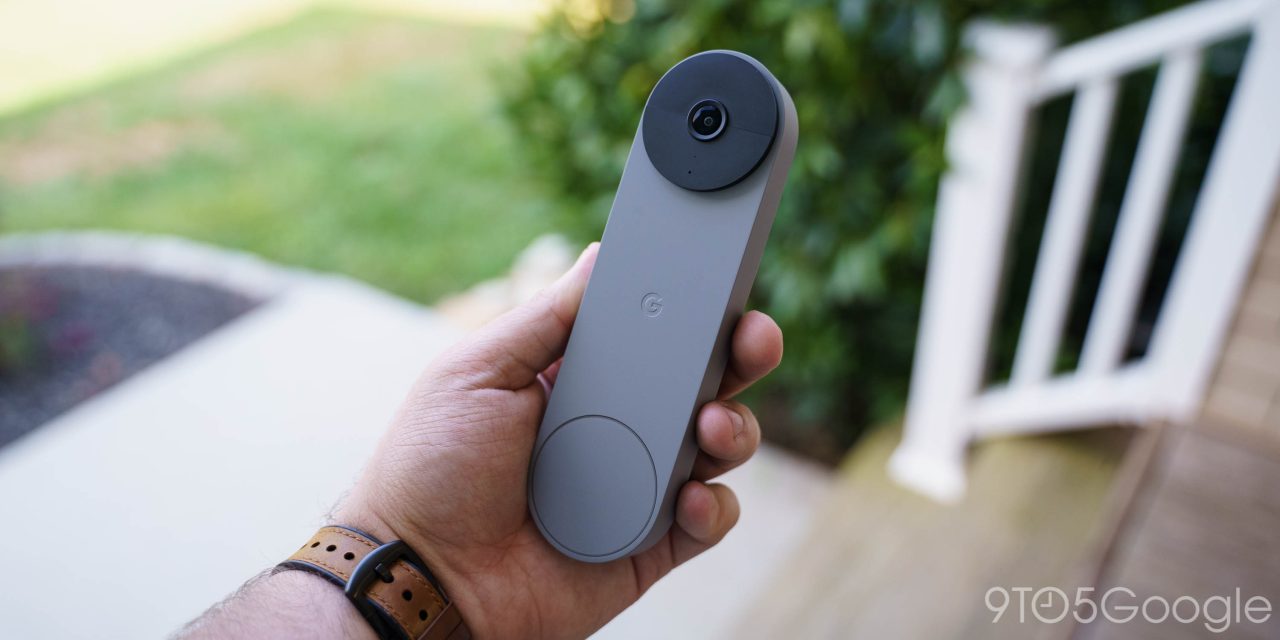 Most smart home gear isn’t for everyone, but a smart doorbell is a piece of tech that arguably most folks should have installed. Google’s Nest Hello was one of the best options for a smart doorbell for years, but it came at a hefty cost and, as the competition improved, fell behind on many features. The new Nest Doorbell brings an updated design, a built-in battery, and several more new features.

To start off with the good, the new Nest Doorbell makes a smart change to the camera sensor. Instead of using a landscape orientation for the video feed, Google opted for an aspect ratio that’s closer to a vertical rectangle. This aspect ratio allows users to see more of the person walking up to their door. Instead of seeing just the upper half of a person, and sometimes with their face cut off on the Nest Hello, the new Nest Doorbell will show a person in their entirety. This can also come with the benefit of being able to better see packages in front of the door, since more of the floor space can be seen.

I’ll also note that the performance of the battery-powered doorbell feels pretty much on par with the wired Nest Hello. Pressing the button outside rings my smart displays and my phone within a few seconds, and the same applies to notifications when someone is detected nearby. I’ve had a few occasions where there was a delay, but I was genuinely surprised at how close Google has mirrored the experience in terms of performance.

The bigger story with the Nest Doorbell, however, is that it has a built-in battery. This battery can serve as a backup if you have the ability to wire the doorbell to your home, or to power the doorbell on its own for up to a few weeks. When it comes time to charge, USB-C does the trick quickly and the removal method is painless.

I opted for a battery-only setup, and I’m very impressed with the endurance this doorbell delivers. Based on my usage, the Nest Doorbell (battery) estimates that it can run for 4 months on a single charge. While my home doesn’t get a lot of visitors, pandemic and all that, I do get deliveries on a regular basis, on average at least once per day. Despite detecting an approaching person or actually sending off an alert to smart displays and speakers, my battery has only drained by 12% in over 2 weeks of use. I’m impressed!

The other big addition to the Nest Doorbell (battery) is that it has built-in local storage. This allows the doorbell to keep recording footage when there’s a power outage, internet hiccup, or a problem with Nest’s own servers. I’ve fortunately not had to deal with any of those issues since installing the doorbell, but it’s something I’m very excited to see and wish that was available on my Nest Hello.

On top of the battery and local storage, the other talking point on the Nest Doorbell revamp is that more work is done on device. As mentioned before, Google sends notifications from this device very quickly, and that’s in part thanks to the fact that people and objects are recognized by the camera on-device instead of waiting for help from Google over the internet. It can even recognize the faces of those you know and announce those names through your speakers/smart displays! However, you’ll need Nest Aware to fully enjoy this feature, a subscription that costs at least $6/month. Without Nest Aware, you’ll also be stuck with only 3 hours of recording for free. You can see a full breakdown of what features require Nest Aware here.

This is not an upgrade

There’s a lot of good to the new Nest Doorbell, its local storage and built-in battery being paramount among them. The performance of the stream, the responsiveness of rings, and the design, too, are excellent. However, there are some definite downgrades.

First and foremost is the deal-breaker for me – the lack of 24/7 recording. Whether on battery or wired, you’ll be limited to event-based recording on this new model. Google explained to us that this is due to heat concerns, as the likely sun-exposed placement of the doorbell combined with its built-in battery could lead to longevity issues. It’s a reasonable enough explanation, but it still comes as a shame that keeps me from using the product long term.

The other downgrade comes from the camera. This is not due to its aspect ratio, which is quite good, but rather due to how the camera handles lighting. I’ve found consistently that the camera has a lot of trouble with a blown-out background on a sunny day, and cannot bring out the details of a delivery driver or anyone else on my covered front porch. This is in stark contrast to the results I’d see on Nest Hello in the exact same conditions. I have to imagine that this comes from the change of sensor, from a 3MP sensor down to a mere 1.3MP sensor, but in any case, Google can likely work out some software magic to improve this over time. Notably, I’ve been pretty happy overall with night vision performance.

Looking at the physical hardware, too, there are some choices that are good and bad. On the bright side, the “peeling” issues of the plastic on the original Nest Hello design won’t be a problem here, but I think the grey model I’ve tested here has a “cheap” look to it. Further, the doorbell’s size is absolutely massive, especially when viewing the two models side by side. This likely won’t matter for most folks, but it’s an eyesore on my porch and could prove difficult if you have limited space to mount a doorbell.

The Google Home app is still a mess

Those physical flaws aren’t the only problem. The Google Home app is another bag of worms entirely, as it’s the only way to use the Doorbell now that the original Nest app has been all but abandoned. I’ve gone much more in-depth in our initial review of the Nest Cam (battery), and many of the same issues hold true.

Admittedly, though, the problems with the Google Home app don’t feel quite as obvious on the Nest Doorbell (battery). Still, it takes just that much longer to open a stream compared to the Nest app, the settings menu is still a mess, and crucially there’s still no web portal at this point (though it will come). Google’s lack of a sensible way to get from one event to the other in the “history” tab also makes it a pain to view what the doorbell has captured, something that’s very annoying on a device that can only support event-based recording.

The two weeks we’ve had to spend with the Nest Doorbell (battery) isn’t quite enough time to make a final verdict, but I have my own personal decision made. The lack of 24/7 recording and the HDR issues with the camera sensor on my front porch make this camera a complete non-starter for me.

That said, I can clearly see the market for this product. If your home lacks doorbell wires or if you rent and don’t have that option at all, the Nest Doorbell (battery) is basically a no-brainer. It has better performance than other battery-powered doorbells, and the battery life is absolutely stellar. But if you have the choice, I’d recommend going for the Nest Hello or wait for the upcoming refresh.