OnePlus 9 Pro vs. OnePlus 10 Pro: Worth the upgrade? [Video] 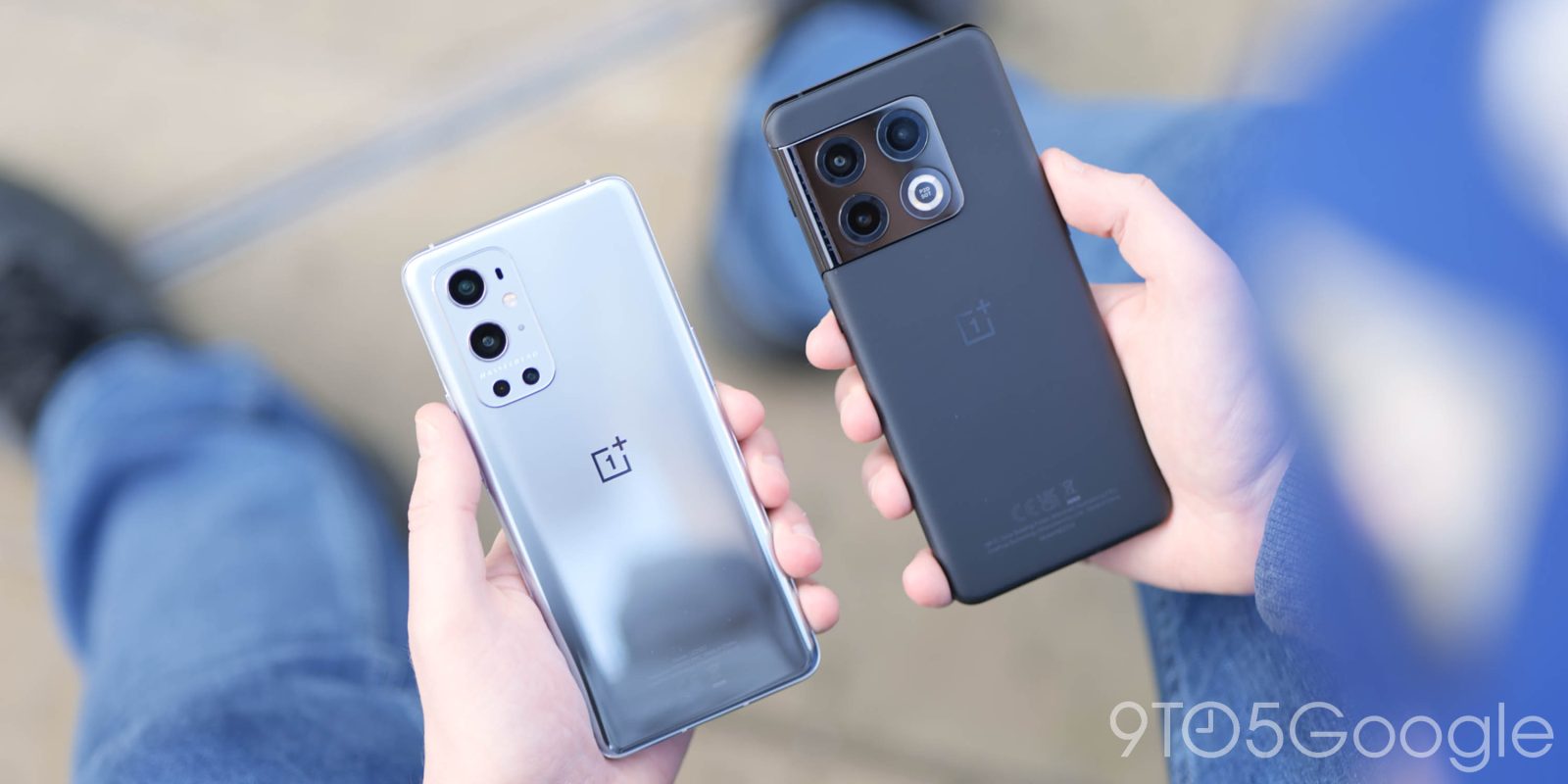 You may already own 2021’s best OnePlus device and are casting an envious glance over at the latest releases. Is there enough of a difference to warrant switching from the OnePlus 9 Pro to the OnePlus 10 Pro? Let’s discuss.

It’s a confusing time for OnePlus, the lines between the one-time “flagship killer” brand and Oppo are now so blurry it’s hard to tell the two firms apart. Walking back on a proposed merger between OxygenOS and ColorOS could help things long term, but it remains to be seen if much of what made the brand so adored by Android enthusiasts can be restored.

Although we can only hope that OnePlus can return to form when it comes to OxygenOS, you’re probably wondering if the latest flagship device is worth a look. With that in mind, we’re here to figure out if an upgrade is something that should even cross your mind.

Video – OnePlus 9 Pro vs. OnePlus 10 Pro: Worth the upgrade?

If you put the specifications of the OnePlus 9 Pro and OnePlus 10 Pro side-by-side you will instantly spot a few little changes, but nothing that instantly stands out as a major area of improvement. The recipe for a OnePlus smartphone remains familiar, but with a few extra ingredients tossed into the mix for a better overall flavor.

There are some bumps to the internals – these include a new processor and a slightly larger battery cell. Of course, the Qualcomm Snapdragon 8 Gen 1 offers some performance boost and potential efficiency gains too. The reality is less pronounced than a spec sheet or benchmarking software would have you believe. Everything is snappy on both devices with little you cannot do in an instant.

LTPO AMOLED screens can drop to multiple refresh rates, as low as 1Hz when viewing photos or still images or even 24Hz, 30Hz, or 60Hz. The improvements to the LTPO 2.0 tech here mean that the OnePlus 10 Pro’s display can more readily drop to the 1Hz range when displaying still images. This should mean slightly better real-world battery performance but it’s actually hard to see the difference unless you examine it closely. Will you be able to tell? We’re not so sure.

Other than that, there are some modest improvements to the 120Hz QHD+ display, including improved color calibration that can adjust better at multiple brightness levels. That said, it’s not a massive real-world jump when using either screen. If you hate curved screens, neither option will be a good fit for you.

Daily performance should be substantially improved on the newer model courtesy of the latest chipset. But it’s unclear if you would be able to notice unless in specific areas like gaming or maybe video rendering. There’s no denying that the OnePlus 9 Pro is still a very powerful smartphone with so much RAM overheard to keep things ticking over nicely for a long time to come.

Unlike last year though, there will be no regular OnePlus 10 in global regions. That means the decision has been taken out of your hands somewhat. The actual design of both devices is similar at the front but quite different at the rear. The camera bump on the OnePlus 10 Pro is stretched out into a stove-top-like array while the OnePlus 9 Pro has large, protruding iPhone-like camera lenses in the upper left.

We’ll commend OnePlus for promising up to three OS updates and four years of security patches for devices, but in recent years, the over-reliance on the OxygenOS Open Beta path is becoming quite frustrating. It’s great if you’re happy to run technically pre-release software, but it shouldn’t be to the detriment of stable releases. However, some do like this as it helps squash bugs and Google’s own rollout of Android 12 wasn’t too great. Let’s hope for better when Android 13 comes around.

While the OnePlus 9 Pro shipped with OxygenOS 11 atop Android 11, it has since been updated to OxygenOS 12 and, therefore, Android 12. The OnePlus 10 Pro ships with Android 12 and a slightly newer OxygenOS 12.1 build. The reality is that this version contains very few changes, save a few little tweaks like the ability to adjust haptic strength and some boosts to the gaming modes.

The OnePlus 9 Pro should be supported up to and including Android 14, and because the OnePlus 10 Pro ships with Android 12 pre-installed, it is, therefore, in line to get Android 15 within its lifetime. If you care about updates beyond those phases, you can always look into installing a custom ROM.

If you look purely at the internal cell size, the OnePlus 10 Pro has the upper hand with a 5,000mAh battery – the biggest in a OnePlus flagship to date. That’s not to say the OnePlus 9 Pro has a “small” battery – its battery still comes in at 4,500mAh. While it’s less obvious, the usage of the more efficient 4nm Qualcomm Snapdragon 8 Gen 1 chipset and the larger battery should certainly favor the OnePlus 10 Pro but real-world longevity is not always consistent with synthetic data points.

There is a more confusing aspect to the device duo here though as 80W charging is not available to those in North American markets due to a limitation in the AC power outlets in the region. Somewhat annoyingly, this means that US devices will be capped at 65W when charging via cable.

This also means longer charge times than the OnePlus 9 Pro as the OnePlus 10 Pro has a larger internal cell. For those of us in global regions, we’ll be able to use 80W fast charging, which goes from 0 to 100% in under 35 minutes. All regions can still access 50W wireless charging and 5W reverse wireless charging across the duo.

On paper, the OnePlus 10 Pro actually has a less capable rear camera array than the OnePlus 9 Pro. It all boils down to the usage of a different ultra-wide-angle camera sensor. The impressive 50-megapixel Sony IMX766 sensor has been ditched in favor of a smaller Samsung JN1 sensor. What you may lose in image fidelity or perceived quality you gain in the actual field of view. With the OnePlus 10 Pro you can shoot at an insanely wide 150-degree field of view. It’s almost a fish-eye lens and you can achieve a similar effect in post using one of the in-built camera modes.

There are some added camera modes for the newer model that might help make up for the loss of one of the best ultra-wide-angle camera sensors we have ever tested. You’re able to capture 12-bit RAW images with every single rear camera lens. Tilt-shift mode returns, as does the Nightscape low-light option, but a new inclusion is that of Long exposure mode, which can produce all manner of interesting images.

A new Movie Mode that allows video capture in the LOG format. This means you can shoot a flat profile and grade in your editing software of choice while retaining full manual control when recording. Another new addition is the Dual-view video, which lets you capture the selfie and rear cameras simultaneously.

All of the other Hasselblad modes are retained including the XPan photo option, plus the color tuning by the Swedish imaging stalwart. The OnePlus 9 Pro includes an extra rear camera sensor in the form of a 2-megapixel monochrome shooter. This enhances black and white images but is missing on the OnePlus 10 Pro. However, a 32-megapixel selfie camera is included on the OnePlus 10 Pro to make up for the monochrome sensor omission.

OnePlus 9 Pro vs. OnePlus 10 Pro: Should you upgrade?

Save the minor camera, battery, and charging speed improvements, just like last year, there really isn’t enough here to justify a jump from the OnePlus 9 Pro to the OnePlus 10 Pro. There is certainly more of a case for those with the OnePlus 8 Pro to upgrade this time around but you might not major gains there either.

There is a debatable step down in the camera setup on the OnePlus 10 Pro, but there are other benefits such as the battery capacity and charge speeds in global regions. But you knew that already. If you have the OnePlus 7 Pro or an older device, then it’s a far more palatable upgrade that is well worth taking a closer look at.