Pixel Buds Pro vs. Pixel Buds: What’s new and should you upgrade? [Video] 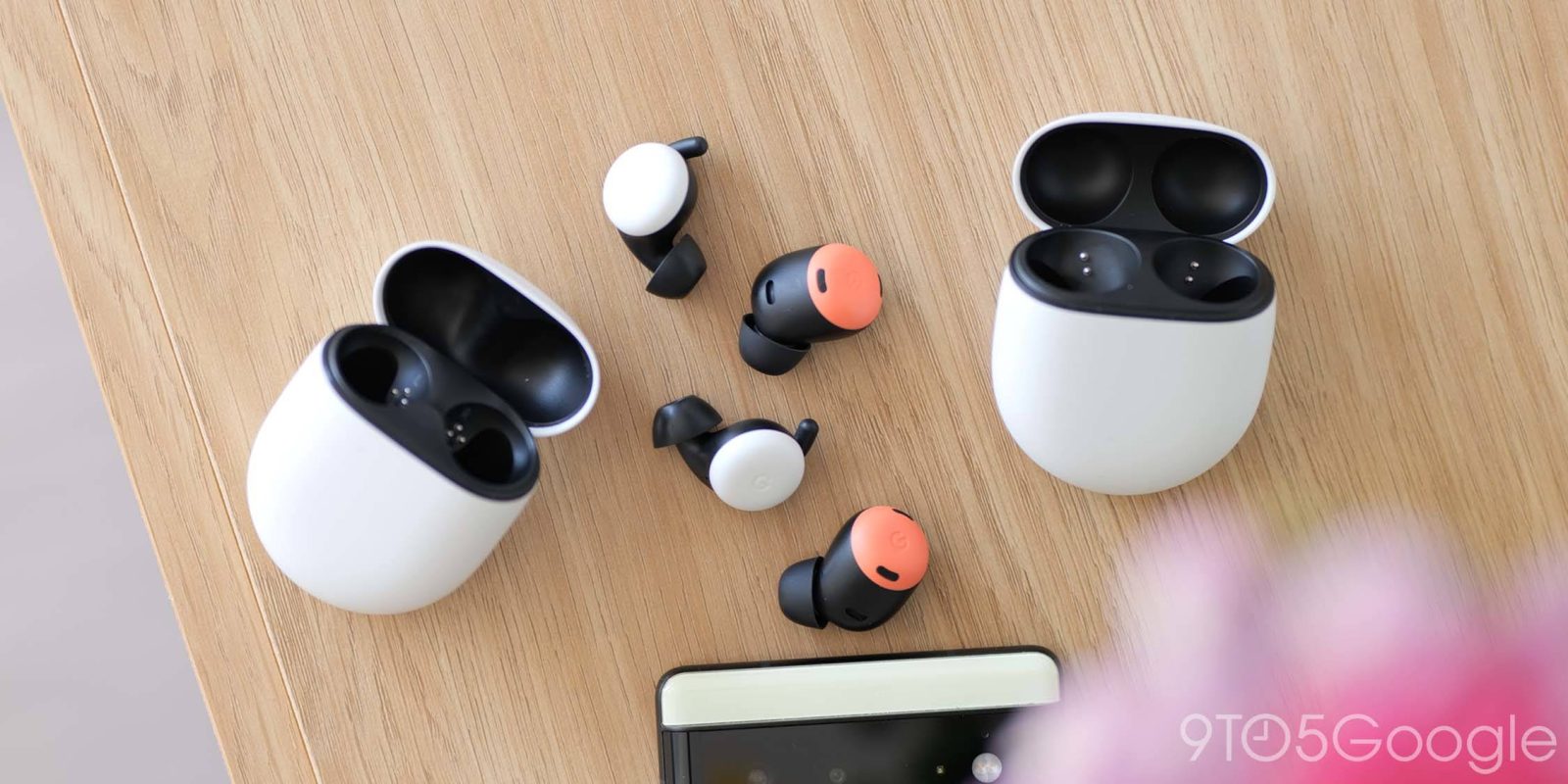 Google is on a roll with new hardware releases, the latest are the Pixel Buds Pro which aim to correct a few issues that the re-released Pixel Buds suffered from back in 2022. Are they a major step up and worth an upgrade? Here’s everything you need to know.

The Pixel Buds A-series are the new entry-level earbud option from Google and are, in their own right, a great buy. While not the flagship audio product, they are a great companion with a number of key improvements over their 2020 counterpart. It’s not clear if the problems were the reason for the 2020 iteration of the Pixel Buds to be discontinued just last year, but we’d wager it might have been a catalyst.

Enter the Pixel Buds Pro, which are the “premium” audio product from Google for 2022 and beyond. With Active Noise Cancellation (ANC), bright colors, and touting long battery life, are they an upgrade over the last such “premium” earbuds from Google? Find out below.

There are a number of key changes to the design of the Pixel Buds Pro over the Pixel Buds that you need to be aware of. Firstly, the actual earbud shape is substantially changed owing to some of the audio and tech improvements within.

You’ll notice larger, more bulbous casings on the Pro model, which is a big departure from the dot-like shape that the entire Pixel Buds series has become synonymous with since entering the market back in 2017. The result is larger, marginally heavier earbuds at 5.3g versus 6.2g. More of each individual earbud will protrude from your ears too, but the difference is minimal.

Because the earbud dimensions have increased, the Pixel Buds Pro case has a larger footprint than the Pixel Buds case. At least from afar, they look almost identical. But the Buds Pro case is flatter and rounder. It’s unlikely you’ll notice a great deal of difference as the case and earbuds combined actually manage to weigh less than the 2020 Pixel Buds. That said, this is an important change that is likely owed to larger internal batteries.

Aesthetically, the cases also have a slight change with the removal of the internal connection LED on the Buds Pro. The external LED has also been moved up to mimic the Pixel Buds A-series charging case. Elsewhere, the pairing button is identical, as is the USB-C charge port down below.

Sadly, the out-of-the-box supported codecs for the Pixel Buds and Buds Pro are identical. SBC and AAC are available meaning no high-resolution audio streaming support at least for now. The brand new LC3 codec should be available but that will require the full Android 13 update and might not provide the fidelity or streaming bitrates that many crave.

Audiophiles will likely notice a difference but for casual listening, these codecs are acceptable. Spacial Audio is set to arrive with a future update to mimic 360-degree sound with the latest and greatest earbuds. Adding to that, a 5-band EQ is also coming later this year for audio fine tuning.

Because of the change in earbud shape, the fit and seal in your ear canal are significantly different. The rubberized stabilizing “fin” has been removed on the Pixel Buds Pro, which means the ear fit doesn’t necessarily feel as secure. With the right silicone earbud tip, this is less of a concern but the Pixel Buds do have the edge in that regard. Plus each earbud on the 2020 model will sit more flush in your ear.

Even with this change, the Pixel Buds Pro can handle lots of head movement without budging — like their predecessors. When worn at places like the gym or when running, the larger size means that the earbud’s main chassis rests against the inside of your ear to help create a seal without the need for the stabilizing fin.

If you’re worried about the “plugged” feeling in your ears due to the removal of the “Spacial Vent” on the Buds Pro, you need not be. This had to be removed to enable effective Active Noise Cancellation, but software that enables “in-ear pressure relief” helps reduce this feeling quite substantially.

Determining the sound quality can be subjective but it’s true that the audio from the Pixel Buds Pro is quite a step up over the Pixel Buds. Firstly, the lack of Spacial Vent means that audio is less likely to leak and you can listen at lower volumes too.

The better seal means that things sound richer, with the bass more impactful as a result. While the Pixel Buds had fairly solid if a little flat audio capabilities, the Pixel Buds Pro have received some tuning in all areas, which makes listening to all genres and spoken word content a pleasurable experience.

Like all Pixel Buds prior, it seems that Google has strived for audio accuracy but this can be to the detriment of certain genres from a listening experience. Neither the Pixel Buds nor Pixel Buds Pro are the best for overall listening quality, but they are great companions for the casual listener. A 5-point EQ is coming later this year, which will allow for some level of fine-tuning to improve the Buds Pro audio experience too. The latest version also does not suffer from audio hissing or buzzing, which has been a complaint on the Pixel Buds and Buds A-series from many owners.

ANC on the Buds Pro is solid, if unspectacular. It’ll drown out the background hum of traffic or an air conditioner but sharp, loud noises will be heard. These are dulled enough to make a difference but the ANC does not manage to fully block out background noise like a pair of over-ear headphones would be able to. Of course, this is not possible on the Pixel Buds, which rely on a good ear seal to reduce distractions in your surroundings.

Notable changes are visible in the functions and features available on the Pixel Buds and Pixel Buds Pro. The Buds Pro appear to lack the Adaptive Sound, Bass Boost, and the experimental Attention Alerts features that are available on Pixel Buds. It’s not clear if this is a permanent measure or if these will come to the Pro version with a future Pixel Feature Drop.

Touch controls remain identical across the Pixel Buds and Buds Pro with swipes controlling volume, taps controlling playback and calls. Tapping and holding activates the Google Assistant but within the Buds Pro settings, you’re able to adjust ANC and transparency mode settings with the tap and hold gesture too.

Because ANC is present, you gain new modes including a “Transparency” mode that amplifies the sounds around you while you are listening to audio or consuming video content. This ensures you’re always alert and may explain the removal of the experimental Attention Alerts feature.

If you have multiple Android smartphones or work and personal device, the brand-new Multipoint feature on Pixel Buds Pro might be an enticing prospect. This is not new to Bluetooth accessories and lets you connect your Buds Pro to two devices at once. The Buds Pro will automatically switch between each device depending on what is happening. For example, when media is started, or if you receive a phone call. Combined with Fast Pair for quick device connections, it’s a nice expanded feature.

Google has made great strides in the battery longevity of the Pixel Buds Pro outperforming the Pixel Buds even if you have ANC active. In our experience, the lifespan is at least 1.5x the previous generation and that can be extended even further if you deactivate the ANC function.

The carry charge case provides almost five full charges for the Buds but with a greater base lifespan, the Buds Pro can go up to 20 hours between charges according to Google. In our experience, the longevity is slightly overstated but still very close to the 11-hour rating with ANC enabled.

Charging is the same for both pairs of Bluetooth earbuds. USB-C or Qi wireless charging using devices like the Pixel Stand are available. Within an hour you’ll have multiple hours of listening after placing on charge with either pair of earbuds.

Pixel Buds Pro vs. Pixel Buds: Should you upgrade?

For many, the intermittent connectivity issues that plagued the Pixel Buds is a valid reason to look towards the Pixel Buds Pro. If you simply want ANC, then it’s a no-brainer here too. Another thing to note is that because the Pixel Buds have officially been discontinued for over a year, they are often available at substantial discounts. Unfortunately, it’s tough to recommend picking the earbuds up given the volume of complaints and issues though.

At $199, the Pixel Buds Pro are not cheap but are competitively priced to many other similar ANC Bluetooth earbuds from other manufacturers. With Fast Pair and Multipoint features, they are a great companion for just about any Android phone thanks to Google’s work. If you’re happy to pay the premium, you’re getting a solid pair of Bluetooth earbuds with great battery, decent sound, and helpful features. For those with the Pixel Buds, the upgrade might certainly be worth it.