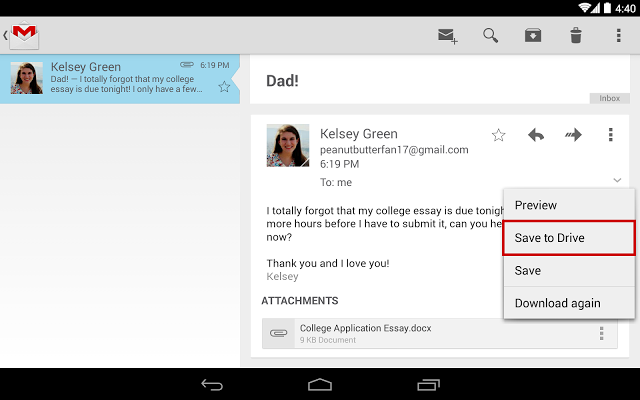 Google has released an update to Gmail for iOS this afternoon that brings “Insert from Drive” and “Save to Drive” functionality to the iPhone and iPad. Just like with Gmail on the web, iOS users can now insert files directly from Google Drive into emails.

If the recipient does not have shared access to the Google Drive file you are sending them, Gmail for iOS will inform you so that you can change the sharing sendings before sending it.

“Important stuff doesn’t always happen when you’re conveniently sitting at your desk. Maybe you’re out to dinner when your boss tells you that she needs the latest project proposal ASAP, or your daughter calls you on your commute home to ask you to proofread her college essay (that’s of course due that night!). While we can’t make your life more predictable, today’s update to the Gmail iOS app, along with earlier updates to the Gmail Android app, makes it easier to get stuff done on-the-go.”

Gmail for iOS also now allows you to change your profile directly through Settings, allowing you to set a profile picture or update your personal information right from your iPhone or iPad.

Lastly, the latest version of Gmail for iOS allows you to choose which signed-in accounts you want visible in the app for users with multiple accounts.

The update is rolling out on the App Store now.

• Save attachments directly to Google Drive so you can access them anywhere while saving space and bandwidth on your device • Insert Google Drive files directly into messages • New account management options to choose which accounts you want to have visible in Gmail without removing accounts from your device. • Change your profile picture (in Settings)

Save to Drive Insert from Drive