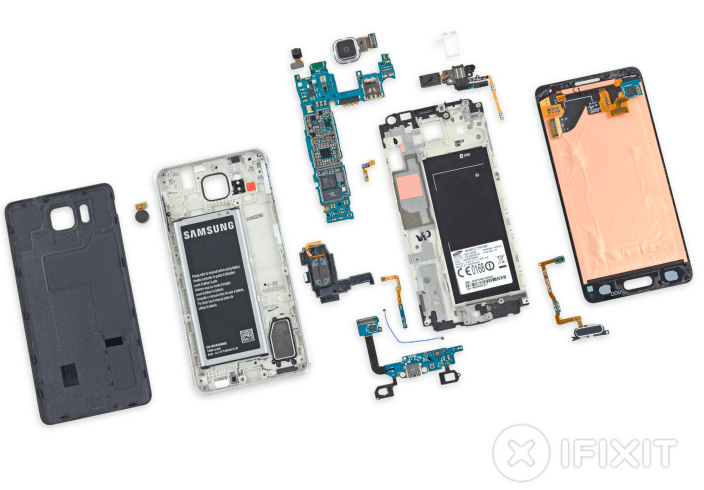 Samsung’s new Galaxy Alpha is getting the teardown treatment today courtesy of our friends over at iFixit. The device, which is being advertised as a Galaxy S5 with an improved iPhone-like build quality and metal frame, has a few internal changes compared to S5 as well.

The report notes that a rubber o-ring embedded in the rear cover of the S5 for waterproofing isn’t present in the Alpha. It’s not that surprising considering the Alpha doesn’t offer the same IP67 dust and waterproof rating as the Galaxy S5, which is a bit disappointing considering the device is otherwise a much higher build quality than Samsung’s flagship S5 devices.

The teardown also found that the Alpha features a “razor-thin display assembly—less than half the width of the iPhone 6 front panel.” No word on whether or not that might contribute to durability issues related to bending like the iPhone 6 has received controversy for lately.

Overall the Galaxy Alpha gets a 5 out of 10 score for repairability from iFixit. Downsides included a “display assembly is held in with a significant amount of adhesive” and the requirement of having to remove the display to replace any component other than the battery. That’s the same score it gave the Galaxy S5.

You can check out iFixit’s full teardown, which includes a list of internal components, on its website.