Motorola has been busy creating a new lineup of smartphones that go beyond the next-generation Moto X and Nexus 6 in partnership with Google. Verizon Wireless is set to host a press event in a few hours in which it unveils its all-new lineup of its iconic DROID devices, including the Motorola DROID Turbo that has been leaked ahead of time.

Verizon Wireless has added a coming soon teaser banner to its test website ahead of the official launch announcement for the Motorola DROID Turbo, highlighting up to 48-hour battery life and a 2.7-GHz quad-core processor as two selling points of the smartphone. The handset appears to have a carbon fiber-like design in the colors red and black.

While the Motorola DROID Turbo has leaked on numerous occasions in the past, including a user guide, unofficial photos and an official teaser from Verizon on Twitter, this leak is one of the more detailed ones and is accompanied by a splash page with a countdown showing less than three hours until the smartphone launches.

In addition to up to 48-hour battery life and a 2.7 GHz quad-core processor, the Motorola DROID Turbo has been rumored to feature a 5.2-inch qHD display with capacitive navigation keys, 3 GB of RAM, a 3,900 mAh battery, 21-megapixel rear-facing camera with dual LED flash and wireless charging capabilities.

The DROID Turbo is expected to ship with Android 4.4 KitKat and a number of Motorola enhancements on top. Specific to the Turbo, the device features a variety of “Zap” capabilities as well. For instance, you can share your screenshot to your “Zap Zone” by saying “OK DROID Turbo, Zap my screen.” 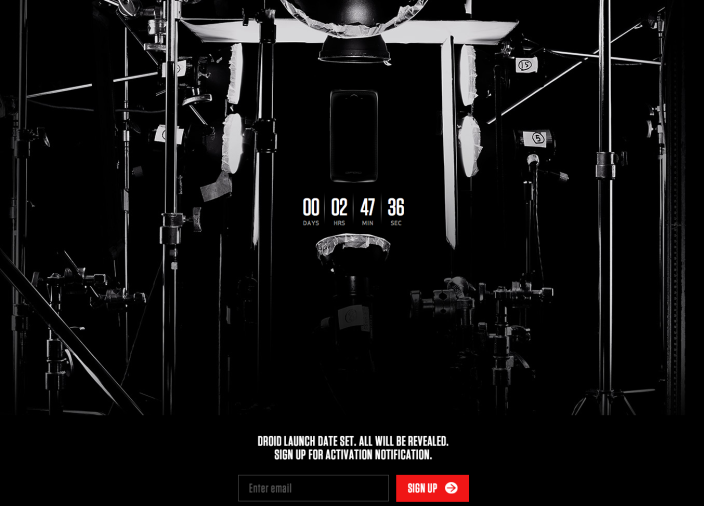