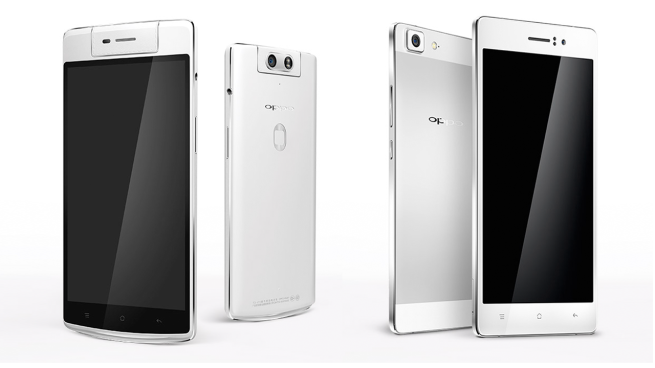 Oppo has unveiled a pair of new smartphones at a recent press event in Singapore. It looks like Oppo is really stepping up its game with these two smartphone announcements. Both devices feature innovations that we’ve yet to see with current smartphones on the market…

First up, we have the Oppo N3. If you need to step up your sefie game, the N1’s successor may be the best option. Oppo’s N3 packs a 16-megapixel camera with an f2.2 aperture that serves as both its rear and front-facing camera. Like the N1, the camera can be rotated to either side of the device, but there’s one very special feature about this camera module. It’s completely motorized.

That’s right, with the push of a button, flick on the screen, or tap of a finger, the N3’s camera can be rotated automatically to an angle of your choice. The device also ships with a new O-Click 2.0 remote that will allow you to control the camera features along with others available within Color OS. Along with that, the N3 can be placed on its side to allow motorized panoramic photos (demonstrated in the video below).

In addition to those tasty features above, the N3 features a fingerprint scanner on its back side that functions similar to Apple’s Touch ID sensor. No swiping necessary, just tap to unlock. You’ll also find an updated Skyline notification light at the bottom that was first introduced with the Find 7. Oppo’s N3 should be available in December for $649 off contract.

Oppo surprised us with a second smartphone announcement. Meet the R5. At just 4.85mm, this is the world’s thinnest smartphone. Being this thin does require some sacrifices, but we still applaud the thinnovation here. With thin being its main feature, most everything else seems minimal, but there are a few things to point out.

The R5 does not feature a 3.5mm headphone jack. It’s easy to imagine why that would be a hard component to include in this thin design, but don’t worry, Oppo has you covered. The R5 comes bundled with a Micro USB to 3.5mm jack adapter or you can use the included O-Music Bluetooth clip that will provide a headphone jack and various controls (which kind of looks like an iPod shuffle).

Check out the hands-on video below:

On the front side you’ll find a 5-megapixel camera, while the back is home to a 13-megapixel shooter, but both feature an f2.0 aperture. Unfortunately, due to the thin design, the rear camera protrudes a bit, but it’s nothing different than most other smartphones out there. The Oppo R5 is also expected to be released this December for $499 off contract.