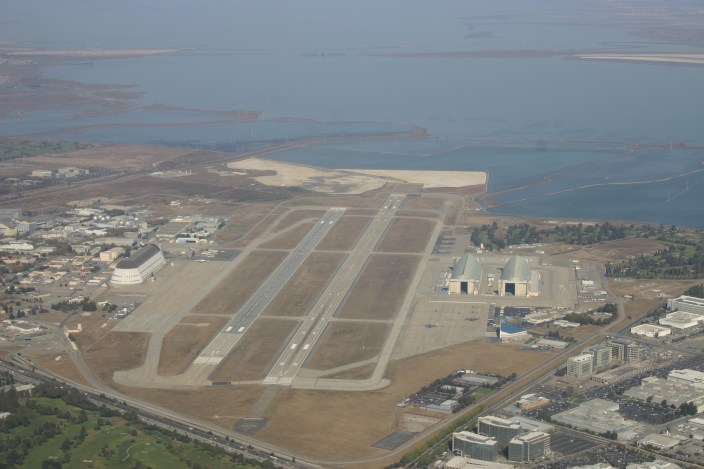 Google has been using NASA’s Moffett Airfield as a home and launch pad for its private jets for several years now, but today, the company announced that it has singed a deal with NASA in which it will lease the airfield for the next 60 years. Google, via its real estate organization Planetary Ventures, will contribute $1.16 billion to the facilities over the lease, reducing NASA’s operation costs by $6.3 million annually.

NASA and the U.S. General Service Administration will retain ownership of the more than 1,000 acres of land in San Francisco Bay. In this plot, NASA houses Hangars One, Two, and Three, an airfield flight operations building, two runways, and a private golf course. Google, however, will take over all operations via Planetary Ventures.

Google has agreed, as part of the deal, to put more than $200 million into rehabilitating the property, while also maintaining the “historic integrity” of the area. As for what the company will be using the facilities for, the res release says that Google will use the site as a home for its advanced research team.

Once renovations are complete, Hangar One will again be home to high-tech innovation as Planetary Ventures begins using the historic facility for research, development, assembly and testing in the areas of space exploration, aviation, rover/robotics and other emerging technologies. Hangars Two and Three will be used for similar purposes.

NASA says that, as it expands into space, it is looking to reduce its footprint here on each, which explains its willingness to lease Moffett Field to Google. The full press release from NASA is below:

NASA Signs Lease with Planetary Ventures LLC for Use of Moffett Airfield and Restoration of Hangar One Deal Part of Agency Effort to Reduce Costs, Surplus Property

In an effort to reduce costs and shed surplus property, NASA today signed a lease with Planetary Ventures, LLC to manage Moffett Federal Airfield (MFA), an agency facility located in Moffett Field, California, and rehabilitate its historic Hangar One. NASA estimates the lease will save the agency approximately $6.3 million annually in maintenance and operation costs and provide $1.16 billion in rent over the initial 60-year lease term.

“As NASA expands its presence in space, we are making strides to reduce our footprint here on Earth,” said NASA Administrator Charles Bolden. “We want to invest taxpayer resources in scientific discovery, technology development and space exploration – not in maintaining infrastructure we no longer need. Moffett Field plays an important role in the Bay Area and is poised to continue to do so through this lease arrangement.”

After a fair and open competition, the U.S. General Services Administration (GSA) and NASA selected Planetary Ventures, LLC as the preferred lessee in February 2014 and began lease negotiations. The negotiated lease, which is neither a procurement action nor a government contract, will put Hangar One to new use and eliminate NASA’s management costs of the airfield, with the federal government retaining title to the property.

“Hangar One is an important landmark in Silicon Valley,” said GSA Administrator Dan Tangherlini. “GSA was proud to support NASA in delivering the best value to taxpayers while restoring this historic facility and enhancing the surrounding community.”

Planetary Ventures currently plans to invest more than $200 million in capital improvements to the property and commits, in this lease, to several undertakings that will benefit the public upon completion, including: — Refurbishing and protecting historic Hangar One in accordance with standards established for historic properties by the U.S. Secretary of the Interior; — Rehabilitating historic Hangars Two and Three; — Operating MFA in accordance with the Programmatic Environmental Impact Statement for public and private use; and, — Creating an educational facility where the public can explore the site’s legacy and the role of technology in the history of Silicon Valley.

“We are fortunate to have had significant input from surrounding communities on setting a future path for Moffett Field,” said Ames director S. Peter Worden. “With the involvement of the citizens of Mountain View and Sunnyvale, we are confident the results will benefit all parties.”

Planetary Ventures will assume operation of the site following the finalization of a joint plan with NASA, the federal Environmental Protection Agency and California Regional Water Quality Control Board to ensure continued environmental stewardship and protection of the existing remedies of the site.

As a tenant to NASA, Planetary Ventures will be required to comply with all applicable laws, regulations and policies, including those on topics of historic preservation, environmental compliance, security, health and safety, and airfield operations to support ongoing missions and other government objectives.

“We look forward to rolling up our sleeves to restore the remarkable landmark Hangar One, which for years has been considered one of the most endangered historic sites in the United States,” said David Radcliffe, Vice President of Real Estate and Workplace Services at Google Inc.

Once renovations are complete, Hangar One will again be home to high-tech innovation as Planetary Ventures begins using the historic facility for research, development, assembly and testing in the areas of space exploration, aviation, rover/robotics and other emerging technologies. Hangars Two and Three will be used for similar purposes.