With the release of Android Lollipop for a wider lineup of Nexus devices expected to occur any day now, the official Google Search app has been updated with a brand new design and several new features that make searching for everything from the best sushi in Chicago to Van Gogh research for a school project that much better of an experience.

First and foremost, the Google Search app has been revamped with a Material Design user interface and that includes bold colors, fluid animations and simplified layouts. Nexus 6, Nexus 9 and Samsung Galaxy Note 4 users also benefit from being able to activate “Ok, Google” searches even when the smartphone is unplugged and the display is off.

The latest version Google’s official app is more effective at organizing your day-to-day life by automatically pulling events that it feels you might want to follow up on, like catching up with Chris over dinner or getting drinks with Susan. Normally, these small events would be buried in your inbox and you might forget to follow up on them later.

Similarly, there are also Google Now cards for keeping track of everything else in your life. From the Google Search blog:

“As you scramble to get through the end of the year, the app will also help you keep track of your trips (whether you’re seeing the family on Thanksgiving or jetting to Vegas for New Year’s eve), to-do lists (did you pay your utility bill? pick up the wine for your Christmas party?) and more (the Bulls score, where you parked your car) with Now cards.

The Google Search app is can also be used as a centralized place to make searches in other apps. For instance, you can say “OK, Google” and then prompt the app to search Tumblr for “things organized neatly,” as evidenced in the screenshot example below. Google Search will automatically open the desired app and perform the search.

Last, Google Search can be used as a quick flip-a-coin app. Simply open the app and say “OK Google, flip a coin” and you’ll have your decision in seconds.

The updated version of Google Search for Android should be rolling out on the Play Store today. 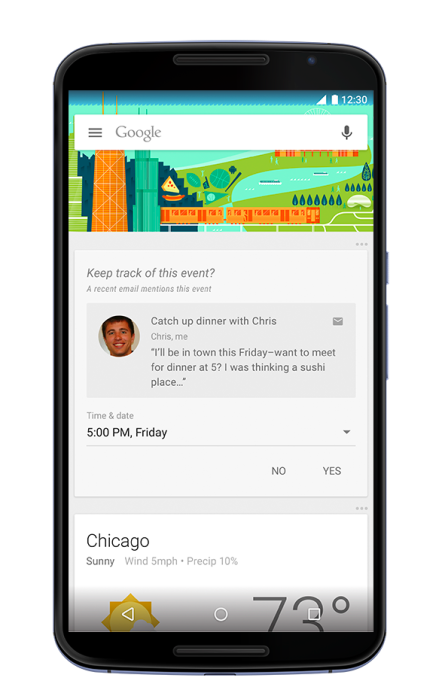