Demand for Nexus devices has always been crazy, but this year Google took it a step further in every department and created somewhat of a super-smartphone. Most of what makes the Nexus 6 so great stems from its pure Android experience. Essentially, you’re experiencing this mobile OS exactly as it was crafted and straight from the source.

Because of Android’s openness, many smartphone makers dilute Android with their own custom skins. This is mostly great for consumers as skins add features that help create the core concepts of devices such as Samsung’s Galaxy Note line, but there’s almost always a tradeoff. You’re sacrificing overall speed and fluidity thanks to the resources being consumed.

The Nexus 6 is running Google’s latest mobile OS Android 5.0 Lollipop and I think it’s the best software Google has ever released. It’s that good. Lollipop has completely transformed Android into something that puts it ahead of the competition in more ways than one. The user interface has been overhauled and Google’s Material Design language is an amazing work of art.

Lollipop has been optimized to run flawlessly and it’s definitely the change that Android needed. Even on older devices like the Nexus 5, Lollipop performs like boss, but to keep up with the times, Google’s Nexus 6 is packing some heat internally.

The Nexus 6 features a quad-core Snapdragon 805 processor clocked at 2.7GHz, an Adreno 420 GPU, 3GB of RAM, and a 3,220 mAh battery. The internal components are surrounded by a beautifully curved metal frame, plastic back, and a 5.96-inch AMOLED display with a resolution of 2,560 x 1,440. This is the entire package as far as Android is concerned.

Check out our Nexus 6 review video below:

With the Nexus 6, Google has created a benchmark for future devices going forward and it gets me excited about what may be coming over the next year. There’s no doubt about it, the Nexus 6 is a fast device. Benchmarks scores will easily show the raw performance behind this device, but it’s more than just numbers at this point. Lollipop is the pretty little bow on this neat package and I’m loving every inch of it.

As I mentioned, the Nexus 6 has an all-metal frame that holds it together. This design was borrowed from Motorola’s 2014 Moto X, scaled up a bit, and refined to fit Google’s needs. The build quality here is stellar. As far as build is concerned, it’s one of the best Android devices I’ve held all year. It may be a recycled design, but somehow it feels like a new one.

The front side of the Nexus 6 features dual front-facing stereo speakers that sound fantastic. It’s not going to replace a high-end Bluetooth speaker or headphones, but I applaud Google and Motorola for their efforts here. These speakers are loud and clear making the Nexus 6 a perfect device for media consumption. The speakers also protrude a little to help keep the QHD display from touching any surfaces. 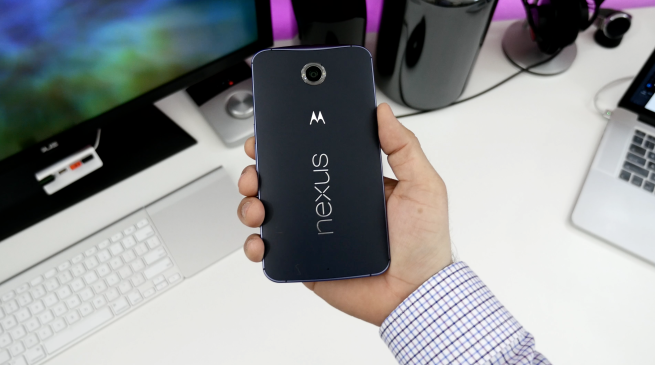 The back side features a hard plastic finish with the Nexus branding and Motorola’s logo which resides in a small Moto X-like dimple. The curved back and flat edges of the Nexus 6 make it very comfortable in the hand and the overall design makes it feel smaller than it actually is. Don’t get me wrong, this is a huge smartphone, but even with a 5.96-inch display, it’s nearly the same size as Apple’s 5.5-inch iPhone 6 Plus. Another note from the hardware side of things is that the Nexus 6 should work with all four major carriers here in the US. I was able to swap between Verizon, AT&T, and T-Mobile SIM cards without an issue.

Aside from its sleek design and industry leading specifications, there’s one main factor that makes the Nexus 6 a winner. Lollipop. This is the best release from Google yet. In my opinion, Lollipop is a game changer for Android. I can’t find more words to express how much I love this operating system. It’s a little boring when compared to feature-filled skins from other OEMs, but Lollipop will give smartphones a new lease on life. 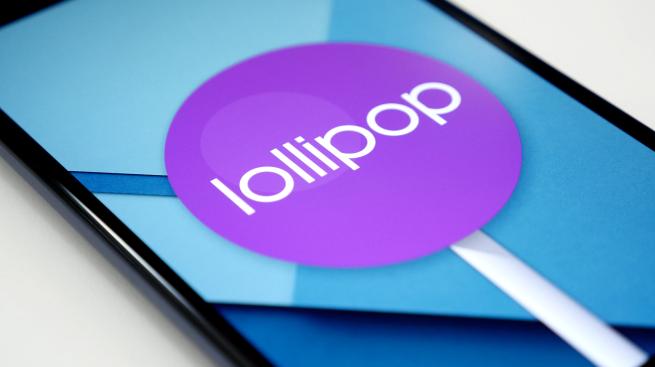 Android 5.0 Lollipop is a dream to use.

Because there are so many changes in Lollipop, I think it’s best to go over my favorite features and how they apply to my Nexus 6 experience. I’m not going to consider the redesign a feature in this list, but everything has been changed. Google has updated all of its apps with a Material Design look and I’m a fan so far.

First up, we have Tap & Go. This is the best and easiest way to transfer your data to a new Android device. During setup of the Nexus 6 (or any other Android 5.0 device) you’ll just need to enable NFC on the old smartphone and touch it to the back of a new one. Google does the rest.

Next, we have the redesigned notification area and features that make notifications a bit more interactive. Pulling down the notification shade with one finger will display any items you may have and with another swipe, or a two finger swipe you can reveal the quick toggle area. This section has a new look and feel with additional options like the brightness slider, flag light toggle, and even a Cast screen button to be used with Chromecast or Google’s Nexus Player. Along with that most elements within the notification shade are shortcuts to various system settings. 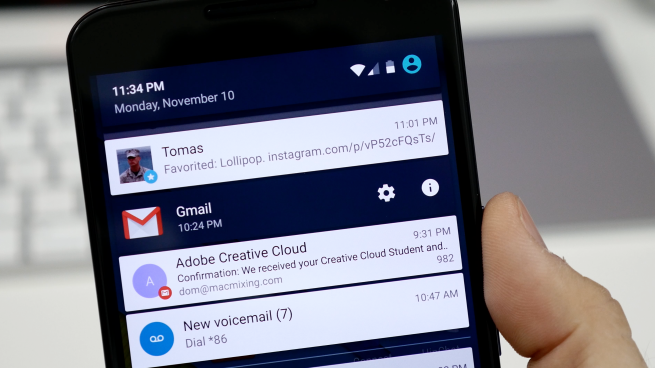 Notifications have been given a much-need management system as well. With a long-press on a notification, you can see which app is pushing it as well as manage app-specific settings for notifications. If you’ d like to keep notifications quiet for a while, there’s also an Interruptions section which can be accessed in the Settings app or with the volume rocker.

Think of this as Android’s ultimate “do not disturb” toggle. Notifications have also been given some space on the lock screen. You can interact with the notifications here, just as you would within the drop down shade. Overall, I’m really digging all of the notification improvements in Lollipop. 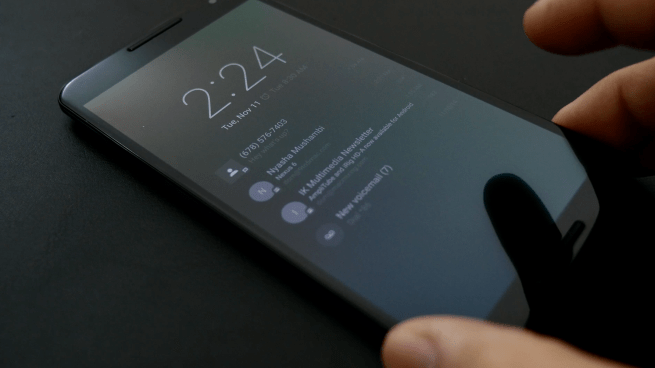 Ambient Display will show your notifications in black and white.

While it’s not completely a software feature, I’m also a big fan of ambient display. This will show notifications on the screen as they arrive or when picking up the device, but using a grayscale instead of color. Most of the display will remain black, but also conserves battery life.

Lollipop also brings guest profiles and additional user accounts to smartphones. It may not be the most desired feature in the world, but it’s one that will help keep your data protected. Within the notification shade, you can access the “User” section of Lollipop. 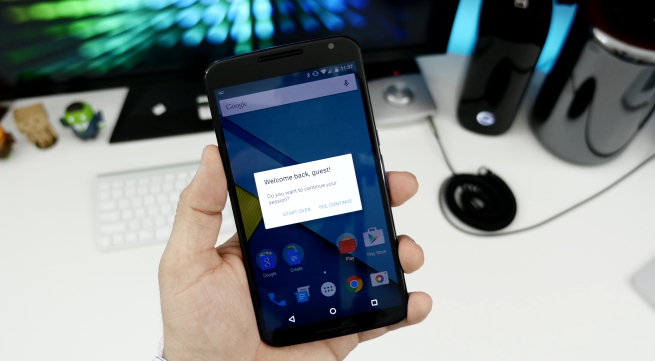 Let a friend use your phone without worrying about them messing stuff.

If needed, you can quickly enable a Guest profile which will give your friends a free temporary environment that’s completely separate from your apps and data. Along with that, you can also create new users that can be accessed with individual passwords and have their own associated Google accounts. Certain restrictions and features can be enabled and disable through the Users section within the Settings app. It may not be a life changing feature, but I still think it’s pretty helpful.

If you’re looking for a simple way to protect your Nexus in other hands, Screen Pinning is a cool new feature as well. Once enabled, this can be accessed through Google’s new multitasking interface called Overview. Simply tap on the circular pin icon in the corner of a card and you can lock the device to that specific app. If you have a secure lock setup, you’ll have to enter in a password to disable it.

The last feature I’m going to discuss is Lollipop’s new battery saver mode. This can be accessed when needed through the Battery section in the Settings app and will add an extra 60 to 90 minutes to your battery life. When enabled, battery saver mode will turn your notification and navigation bar red so you won’t forget it’s running. It does restrict most background data and reduces the performance a bit, but it’s definitely worth it and may be necessary depending on your use, but I’ll get into that a little later.

When it comes to camera performance, I thought the 13-megapixel camera on the Nexus 6 did a great job under acceptable lighting. Just in case you were curious, I also compared the camera to the Nexus 5 and iPhone 6 Plus in separate articles. The camera on the Nexus 6 is great, but there are certain times where it can be hit or miss as well. Under the right conditions, you can capture some great photos from this device, but everything tends to break up in low-lighting.

As for UHD video recording, it’s not spectacular, but it’ll get the job done. The optical image stabilization helps out for photos and videos and it’s definitely a welcomed addition over pure digital stabilization. I did notice the UHD video dropping frames occasionally during playback on the QHD display, but overall the Nexus 6 provides a good camera experience all around.

I’m a heavy smartphone user and the Nexus 6 has been my main phone for a couple of weeks now, so I feel like I have a good understanding of the software and battery performance. Most of the time I saw screen-on time around 4.5 to 5 hours. On extreme use days, this number would drop to the 4 hour range. Keep in mind these numbers will vary based on the user and other factors.

The included Motorola Turbo charger also helps out with battery life in a way. It charges up the battery much faster than a standard charger and will provide you with about an hour more of usage after just 15 minutes of charging. In the end though, battery life on the Nexus 6 is pretty good.

While the software features may be a bit lacking when compared to third-party Android skins, the Nexus 6 provides the smoothest experience you can find at this point. I’m a big fan of the build quality, dimensions, and technology inside of this smartphone. If you’re looking for the cleanest Android experience out there, the Nexus 6 is an insta-buy. It’s packing the latest specifications and will remain relevant from a software perspective much longer than its competition. This is Google’s Nexus 6 and I love it.

That being said, it’s also priced as a flagship device and will set you back $649 for the base storage configuration. At this point, the Nexus 5 is looking like a sweet deal, but if you need technology’s latest and greatest with Google’s intended software experience, there’s no other device out there that will offer exactly the same. I have no intentions to leave behind the Nexus 6.

Should you buy it? Well, since the Nexus 6 will be available through most major carriers, you’ll now have the ability to upgrade with your plan which makes the deal even better for some people. At its $649 entry price, I think the Nexus 6 is a great deal. This is one of the best, quite possibly the best, Android device you can buy this year.