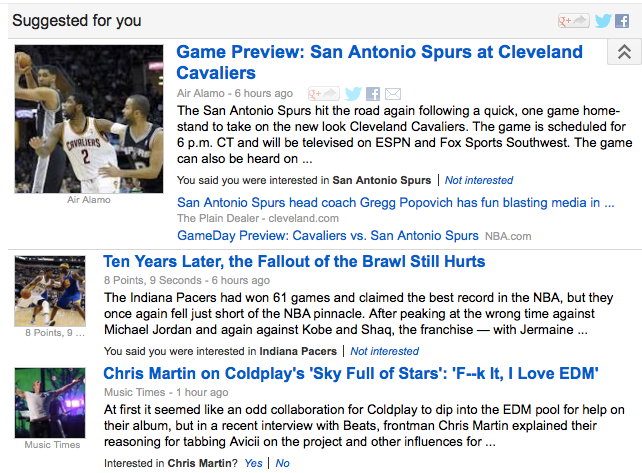 Google News founder Krishna Bharat announced in a post on Google+ that the company is rolling out a new “Suggested for you” feature to News search results. Bharat says the goal of the section is to show news specific to you and topics that interest you, as well as local stories (via Search Engine Land).

For each story that appears, Google will give its reasoning for why it included it in the suggested tab, as well as an option to mark it as not interesting. For instance, if you search for Coldplay a lot, the “Suggested for you” tab will show you recent news that is about or mentions Coldplay. The stories change with the news in an effort to keep things “fresh and serendipitous,” Bharat says.

Google News now has a “Suggested for you” section with stories likely to match your interests. The goal is to surface narrow and local topics specific to you. You can tweak by saying ‘Not interested’ until it’s more to your liking.

The feature appears to be rolling out to users gradually, so it may take a few days for it to hit your account.