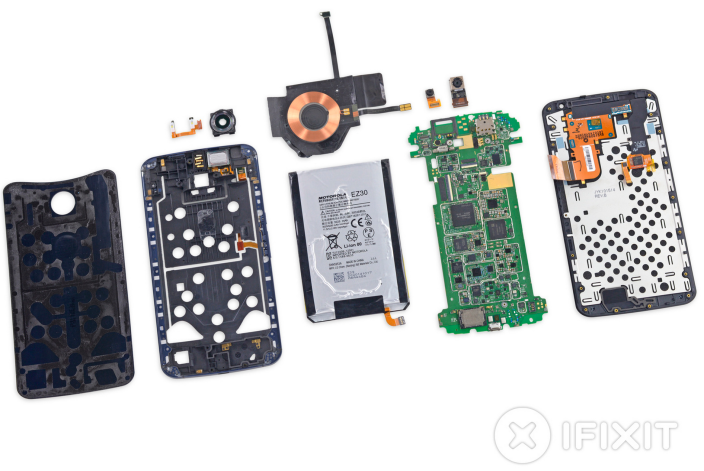 Following its ritual teardown of the Google’s new HTC-made Nexus 9 tablet earlier this month, today our friends over at iFixit have torn apart Google’s new Nexus 6 smartphone made by Motorola. While the Nexus 6 scores a decent repairability score— 7 out of 10, which is on par w/ the new iPhone 6 Plus— it does have some shortcomings that you’ll want to be aware of before cracking into your phone for repairs.

The big things to watch out for is a whopping twenty-two screws to secure part of the frame. That, however, actually improves the device’s repairability score as it comes in handy by largely replacing adhesive: Under the moderately adhered rear cover lies a midframe secured with an absurd twenty-two T3 Torx screws that silently await our precision driver… With cables decoupled, it’s suddenly delightfully apparent why there were so many screws in the midframe. The Nexus 6 practically falls apart into two halves; the midframe/battery assembly, and the display/motherboard assembly. Thanks to loads of screws, we don’t have to deal with any adhesive, or even any tricky plastic clips.

Other notes from the teardown: The battery is glued-in and not as accessible as you might hope, but it’s still replaceable. Other components are soldered to the motherboard and won’t be as easy to replace including the vibration motor, SIM card slot, USB port, and speaker. A digitizer fused to the Nexus 6’s display will also make for increased costs for display replacements, according to iFixit.

A full list of components found inside the device that aren’t advertised by Google below:

The Nexus 6 officially launched earlier this month after going up for preorder in October. Carriers, at least in the US, have also started sales of the device, however some stock from AT&T is reportedly being sent back due to a software bug spotted by Motorola. Our full review of the new Nexus 6 is here.