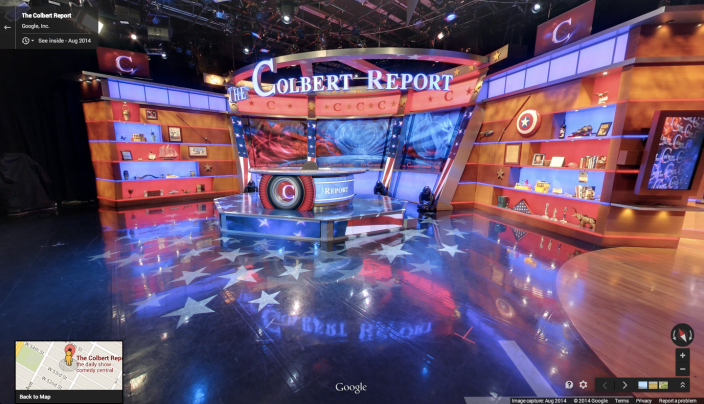 With Comedy Central’s The Colbert Report officially coming to an end tonight and host Stephen Colbert moving on to “The Late Show” next year, Google today added a virtual, 360-degree tour of the show’s studio to Google Maps.

Google is promoting its Google Maps Business View feature, which allows businesses and others to add the indoor virtual tours to Maps to complement the Street View imagery it has long offered for navigating outdoors.

The series concludes tomorrow, but you can still feel like you’re in the audience (or relive the good ol’ days) with a brand-new virtual tour of the studio. And the show has created an interactive experience with the Business View imagery that lets you explore and remember some of your favorite moments from the show. And for those who want to tour more entertainment and news studios, check out our Views gallery.

As always, Google reminds that Business Views feature is available across platforms in Maps whenever a “See Inside” marker appears over locations. Google says it has already added indoor imagery for hotels, restaurants and retail locations in over 30 countries.