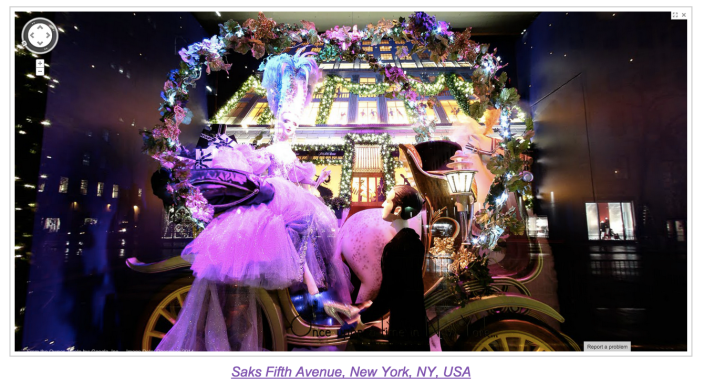 Google Maps is today releasing imagery of iconic holiday window displays from retailers in London and New York, allowing users to get a Street View-style experience of the elaborate Christmas and holiday decorations that a few big retail stores are known for.

The Street View Windows Displays include Saks Fifth Avenue, Macy’s, and Bloomingdale’s in NYC, and Liberty and Selfridges in London.

Half the fun of holiday shopping is seeing the lavish, seasonal displays in the windows of shops and department stores as you pass by. Starting today, with Google Maps Business View, you can see decked out displays in New York and London—without braving the cold weather, lugging bags around or fighting for sidewalk space with fellow shoppers. Now grab your virtual reindeer because we’re off to our holiday window tour!

The feature is yet another way Google is attempting to promote its Google Maps Business View feature, which allows businesses and others to add the indoor virtual tours to Maps to complement the Street View imagery it has long offered for navigating outdoors.

Earlier this week Google added a virtual, 360-degree tour of The Colbert Report studio ahead of the show’s final episode.