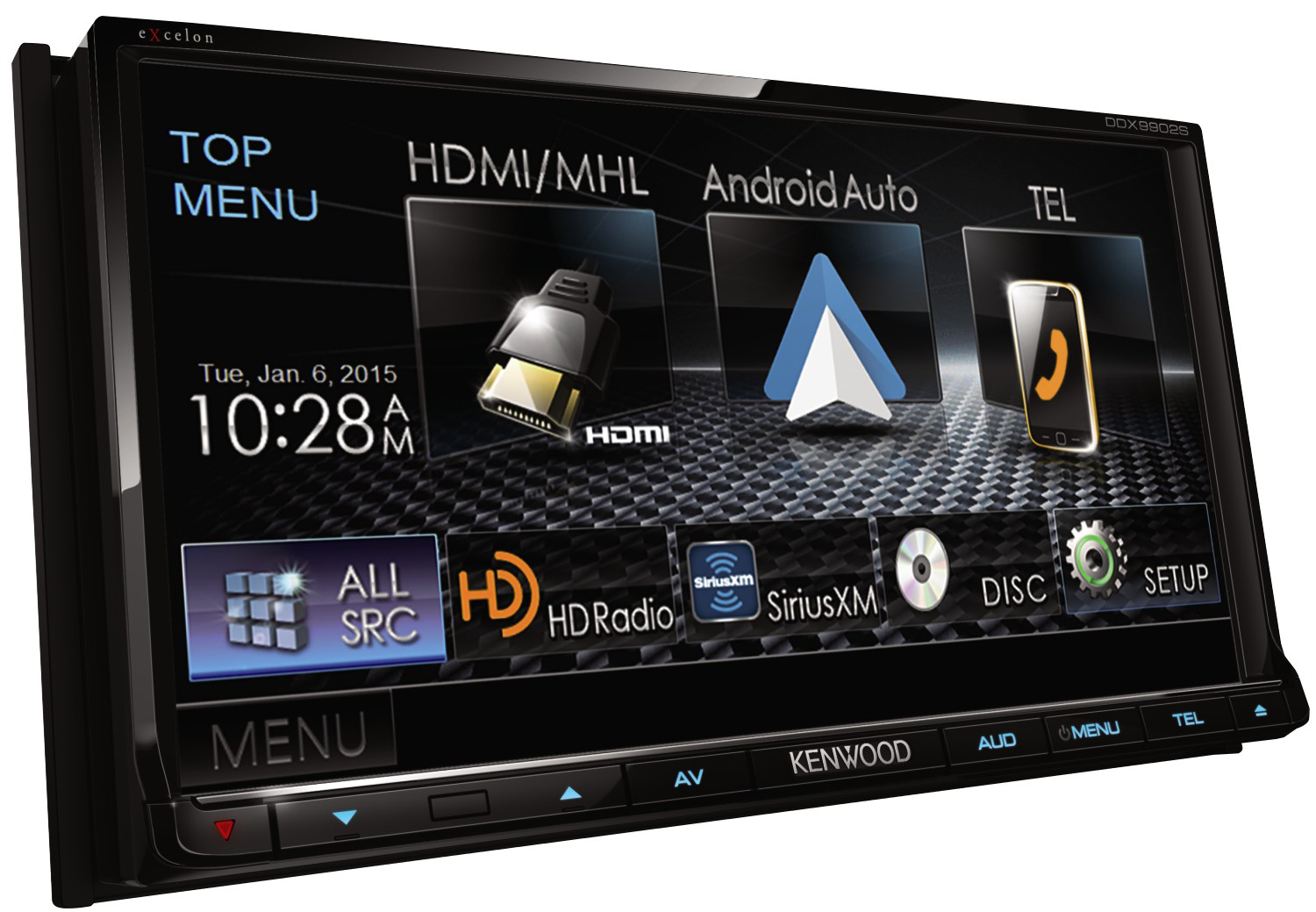 Kenwood announced today at CES 2015 its first entry into the aftermarket Android Auto space with its new DDX9902S multimedia receiver. In addition to supporting Android Auto, Kenwood says its DDX9902S display will support Apple’s CarPlay feature in the same unit.

Specific details about Kenwood’s new Android Auto-supporting DDX9902S multimedia receiver are not yet available, but Kenwood describes the head unit as “premium” with a display featuring a “high-sensitivity touch screen.”

The unit also offers other smartphone connectivity features including Bluetooth pairing for music playback and phone calls as well as MHL-supported HDMI input for controlling audio and video playback from supported apps. Both Pandora and iHeartRadio have native integration while HD Radio is also available in addition to Sirius XM Radio.

Specific pricing and availability have not yet been announced, but Kenwood’s first Android Auto-compatible head unit is on display this week at the Consumer Electronics Show. In the meantime, you can check out our hands-on comparison of Android Auto and CarPlay here.

LAS VEGAS – January 6, 2015 (SDG MEDIAWIRE) – At the 2015 International CES in Las Vegas, Kenwood will display the DDX9902S, the first receiver in its lineup that includes Apple® CarPlay, the smarter, safer way to use iPhone® in the vehicle. The multimedia receiver will also include Android Auto, which leverages features of an Android phone through a driver-friendly interface.

“We understand that consumers are loyal to the brand or platform of smartphone they use,” said Tony Mercado, marketing manager for Kenwood. “To that end, we wanted to create a multimedia receiver that doesn’t force the customer to choose based on his or her preferred smartphone. The DDX9902S allows customers to enjoy a safe, integrated experience with the phone they love.”

The DDX9902S features a high-sensitivity touch screen that allows the user to reliably make selections and interact with screen content. With CarPlay, familiar apps are within easy reach and display just the right amount of information. At the heart of the interaction is Siri, which enables users to control, read and reply to messages and more by simply speaking. Siri also provides access to music, podcasts and other third-party apps, and augments Apple Maps for full-featured, voice-controlled navigation.

With Android Auto, the menu bar makes it easy for drivers to select sources, including navigation, phone and music. Deep integration with Google Now shows informative cards to provide users with location- and preference-aware information at the right time, and robust voice recognition and playback deliver information safely to the driver.

Aside from the smartphone interfaces, the DDX9902S is a premium Kenwood multimedia center. Bluetooth integration enables safe phone calls and wireless music from a paired smartphone. An MHL-supported HDMI input connects to iPhone 5 and 6 models, as well as select Android-based smartphones, to charge the device, control compatible on-device apps and play its audio and video content on the receiver. Built-in control of Pandora® and iHeartRadio™ expand music choices when using a smartphone’s broadband connection, and HD Radio™ doubles or triples local programming options in CD quality.

The DDX-9902S is also SiriusXM-Ready™ and connects to the latest SiriusXMSXV300 Connect Vehicle Tuner (sold separately, subscription required), to access commercial-free music, plus premier sports talk and live events, comedy, news, exclusive talk and entertainment, and the most comprehensive Latin music, sports and talk programming in radio delivered via satellite.

Additional safety and convenience options include the ability to add a rear-view camera and maneuver safely with on-screen parking guide lines, and compatibility with factory steering wheel audio controls.

The MSRP and ship date of the DDX9902S will be announced soon. It can be seen at the Kenwood booth—No. 1702 in the North Hall of the Las Vegas Convention Center—during CES.

Sirius, XM, SiriusXM and all related marks and logos are trademarks of Sirius XM Radio Inc. and its subsidiaries.

JVCKENWOOD USA Corporation is a wholly-owned subsidiary of JVCKENWOOD Corporation and is a leading developer of imaging, home and car entertainment, and navigation products for the consumer market, two-way radio communications systems for public safety, private industry and amateur users, and video equipment for the broadcast and professional markets. For detailed information, call JVCKENWOOD USA at 1-800-950-5005 or visit us at http://us.jvckenwood.com, www.kenwood.com/usa and www.jvc.com.