Softcard is shutting down March 31, Google Wallet to fill its shoes 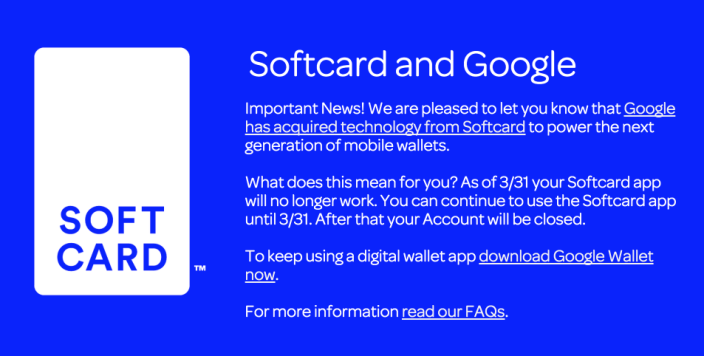 Google announced a couple of weeks ago that it had acquired some technology and IP from Softcard, and today the company has taken to its website to announce that the service will be getting shuttered completely as of March 31st.

This news comes after rumors started spreading that Google would be re-introducing its payments service at Google I/O under the name “Android Pay“. Google’s Chrome and Android lead Sundar Pichai confirmed the existence of such a service earlier this week at Mobile World Congress.

Important News! We are pleased to let you know that Google has acquired technology from Softcard to power the next generation of mobile wallets.

What does this mean for you? As of 3/31 your Softcard app will no longer work. You can continue to use the Softcard app until 3/31. After that your Account will be closed.

For more information read our FAQs.

For those that still use Softcard, the company recommends that you head over to Google’s website to download Google Wallet.