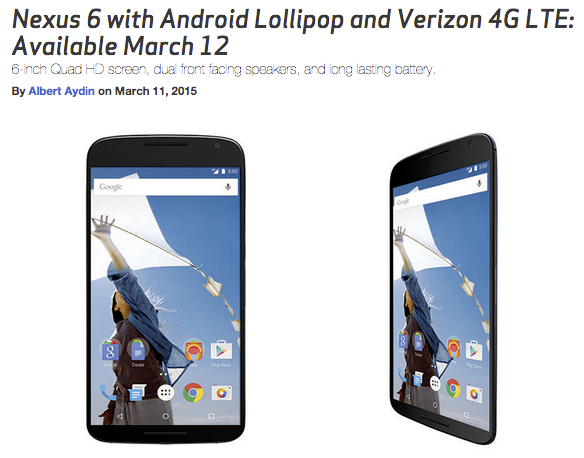 Remember the Nexus 6 launch waaaay back before the holiday shopping season last year? That’s when everyone except Verizon started carrying the Nexus 6 in the US. Shamefully, today, they are officially launching the phone almost 6 months after it launched on its competitors. It will be available to buy (After lots of rumors and delays) starting tomorrow and in Verizon Stores on March 19th for $250 on a 2 year Verizon plan or$27.08/month x24 on Verizon Edge (ouch – comparatively the $650 iPhone 6 is $199 subsidized).

A small bonus, it will ship with Android 5.1 and will come with 6 months of Google Play All Access – which will expire right about the time the next Nexus phone is launched. Verizon clearly has some catching up to do in the area of keeping modern and playing fair.

People have purchased the Nexus 6 from Google Play or other venues for $650 have had no issues putting in a Verizon SIM and at a $250 subsidized price, there is no reason to stop now. There is certainly some very bad blood between Google and Verizon – perhaps related to the latter’s MVNO ambitions. Verizon and Motorola continue to be good partners on their Droid lineup.

To all Nexus fans,

Thank you for your patience.   The Nexus 6 by Motorola will be available for ordering on the nation’s largest and most reliable 4G LTE network starting March 12 online and will be in stores starting March 19. The smartphone will be $249.99 with new two-year activation or $27.08 per month for 24 months with Verizon Edge.

Customers who purchase the Nexus 6 before March 31, 2015 can get a 6-month subscription to Google Play Music All Access at no additional cost ($9.99 a month after trial). That means you can store the songs you own and also stream from a library of more than 30 million titles.

The front-facing speakers sound even better   when paired with the 6-inch AMOLED Quad HD display for multimedia. That means better gaming, YouTube-ing, Netflix-ing, Vine-ing, and Snapchatting with friends. With all the social media happening, you’ll want to share your own experiences and moments. The Nexus 6 has a 13-megapixel rear facing camera with optical image stabilization so your Instagram and Twitter profiles won’t be full of blurry pictures. And the 2-megapixel front camera is made for selfies.

The Nexus 6 also launches with Advanced Calling 1.0 capabilities, letting you enjoy HD Voice Calling to other compatible Verizon smartphones.  Activating this feature also enables simultaneous voice and data use, so you can talk and surf the web at the same time.