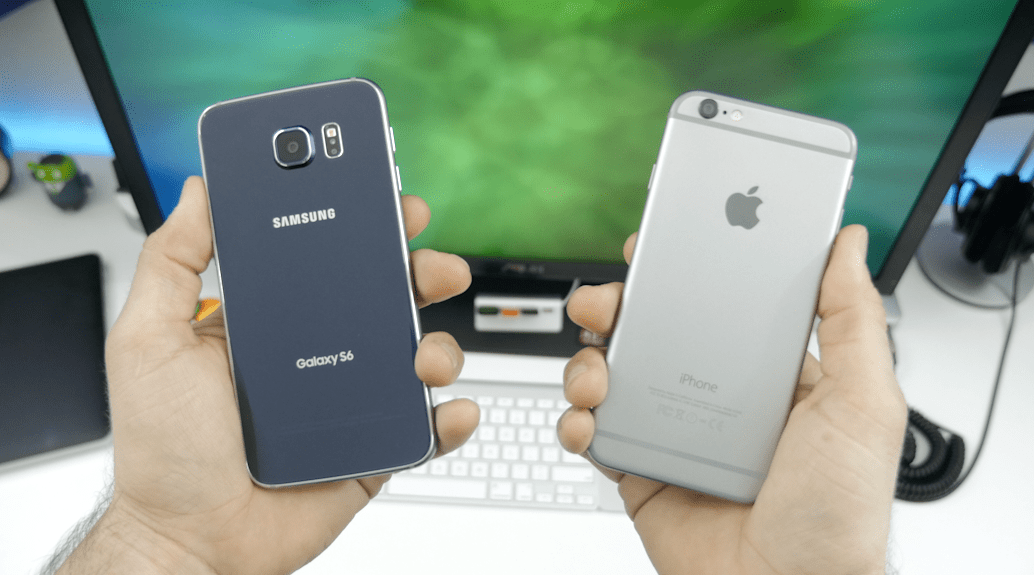 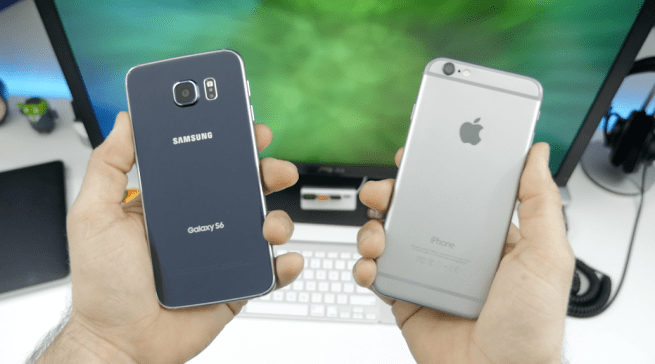 It’s always a difficult task when comparing iOS and Android devices, but this year it may be more important than ever. Samsung has finally stepped up its game with the Galaxy S6, and now we have something that is truly comparable to Apple’s iPhone lineup. Today we’re getting into the ultimate comparison between Samsung’s Galaxy S6 and Apple’s iPhone 6…

In this comparison we’ll be looking at hardware, design, software, camera performance and specialty features that each device offers. Before we get into that, let’s talk about specifications. First up, Apple’s iPhone 6 features a 4.7-inch IPS display with a resolution of 750 x 1,334 (326 ppi). Along with that, we have a dual-core Apple A8 processor clocked at 1.4GHz, 1GB of RAM, 16/64/128GB of storage, and an 1,810 mAh battery.

Benchmarks between these two devices are very different, with only the single core score showing similarities, but that does’t necessarily mean there’s a big gap in performance. The software on each device is optimized to run best on its hardware, so you can definitely expect a fluid experience on either one.

Check out our iPhone 6 vs Galaxy S6 comparison video below:

When it comes to hardware between these two devices, there are as many similarities as there are differences. Apple’s iPhone 6 features a unibody aluminum design with a front glass panel that curves around the device to provide a uniform feeling in the hand.

The Galaxy S6 is built with a metal frame and Gorilla Glass 4 covers the front and back side. The design here is almost like a hybrid between Apple’s iPhone 6 and iPhone 4, but with a larger display. This is not a bad thing though. It’s nice to see Samsung change things up and finally give its Galaxy smartphones a premium look and feel.

Starting out with the Galaxy S6, the front side is home to a 5 megapixel camera, earpiece, LED notification light, capacitive navigation buttons, and the home button with a revamped fingerprint sensor. On the left side we have a pair of volume buttons, while the right side is home to its lock button and SIM card tray. The top has an IR blaster and on the bottom you’ll find the headphone jack, Micro-USB port, and a small mono speaker. The back features a 16 megapixel camera with optical image stabilization that shoots up to UHD quality video, LED flash, heart rate sensor, along with Samsung and Galaxy branding.

With the iPhone 6, on the front side we have a 1.2 megapixel camera, earpiece, and Apple’s home button with a built-in fingerprint sensor called Touch ID. On the left side we have two volume buttons and a mute switch, while the right side has a lock button and the SIM card tray. There’s nothing to see on the top of the iPhone 6, but the bottom is home to a 3.5mm headphone jack, Lightning port for charging, and a mono speaker. On the back we have an 8 megapixel camera that shoots up to Full HD quality video, dual-LED flash, and an Apple logo.

There’s no denying the similarities in design between these two smartphones, but their software and hardware makes up some of the biggest differences. The software experiences here are highly based on preference, but there are aspects about both that are favorable.

The iPhone 6 is running iOS 8 and offers a highly optimized feature set with a very minimalist approach. If you’ve used iOS before, this device won’t be too hard to navigate. The home screen provides space with multiple pages to store and organize apps and you’ll find most of the device’s bells and whistles in the Settings app, Notification Center, and Control Center. Overall Apple keeps iOS very simplistic, but that’s what most users expect from it.

Customization options are slim to none within iOS, but you can add widgets within the Notification Center’s Today view for quick access to features in compatible apps and third-party keyboards from the App Store. Along with that, the iPhone 6 features Apple Pay which enables mobile payments via NFC with compatible banks and credit or debit cards. Apple Pay works in part with the Touch ID fingerprint sensor on the home button which also is used to unlock the device, authorize app downloads, and provide specialized integration to third party apps.

If you’re having trouble reaching the top of the screen, Apple has a solution for that called Reachability. With a double tap on the home button, the user interface will slide down half way and make things a bit easier to reach. Apple’s iPhone 6 also features full integration with many features that are available in OS X Yosemite.

The Galaxy S6 is running Android Lollipop with Samsung’s TouchWiz skin and in some aspects, this is the exact opposite of iOS. TouchWiz offers the ability to change the user interface via themes, but at launch there aren’t very many to choose from. The Galaxy S6 also allows you to change the grid size of your home screen layout and choose between 4 x 4, 4 x 5, or 5 x 5. The design of TouchWiz has been simplified over the years and this is definitely the lightest iteration we’ve seen yet.

The Galaxy S6 also features a fingerprint sensor located within its home button. Fingerprints can be added within the Settings app and the process is simple and easy to do. This fingerprint sensor works comparably to Touch ID and is a joy to use, but I can’t help but mention how similar the setup process is between the two. Samsung’s sensor will also play a crucial role in Samsung Pay which, like Apple Pay is a mobile payment platform coming to the Galaxy S6. Either way, it’s nice to see this feature work so reliably on Samsung’s 2015 flagship.

If you’re into quirky software features, TouchWiz has a lot of them such as Muti-Window which will allow you to run 2 apps at the same time in split screen mode. It’s also important to note that Samsung’s Galaxy S6 features quick charging capabilities and built-in wireless charging. That may not be important to everyone, but it makes a difference if you’re going through battery quickly.

As the old saying goes, “megapixels aren’t everything.” Keeping that in mind, even with the 8 megapixel difference in sensors between these two devices, both take excellent pictures. That being said, optical image stabilization may give Samsung’s Galaxy S6 an advantage over the iPhone 6. Apple’s iPhone 6 Plus features optical image stabilization, but even without it the iPhone 6 produces fantastic pictures. Each camera has its strong points and weaknesses, but I’ll let you be the judge on this one. If you’d like to see the full resolution images from the comparison video, check out the galleries below.

As for video performance, the iPhone 6 shoots 1080p video at 30 or 60 frames per second. It’s definitely a solid camera for video recording and the digital stabilization helps to keep photos and videos steady and clear. On the other side of things, Samsung’s Galaxy S6 shoots up to UHD video quality and the optical image stabilization helps keep it smooth. Both of these cameras are capable of great things and you won’t be disappointed either way. For a look at video samples, check out our full comparison video above.

So which one should you get? Well, I’m not here to tell you which of these devices is better. In fact, it would be hard to declare either one as the clear winner. Both the iPhone 6 and Galaxy S6 are built from excellent materials and perform flawlessly with their respective operating systems. Aside from iOS vs Android, it’s going to come down to which device and ecosystem suits you the best.

If you’re strictly into the numbers on paper, Samsung’s Galaxy S6 may be appealing. On the other hand, Apple is known for quality and performance with iOS devices. Hopefully, this comparison helped clear up a thing or two between these flagship smartphones. Let us know which one you prefer.