Review: The Galaxy S6 and S6 Edge are the best smartphones Samsung has ever made (Video) 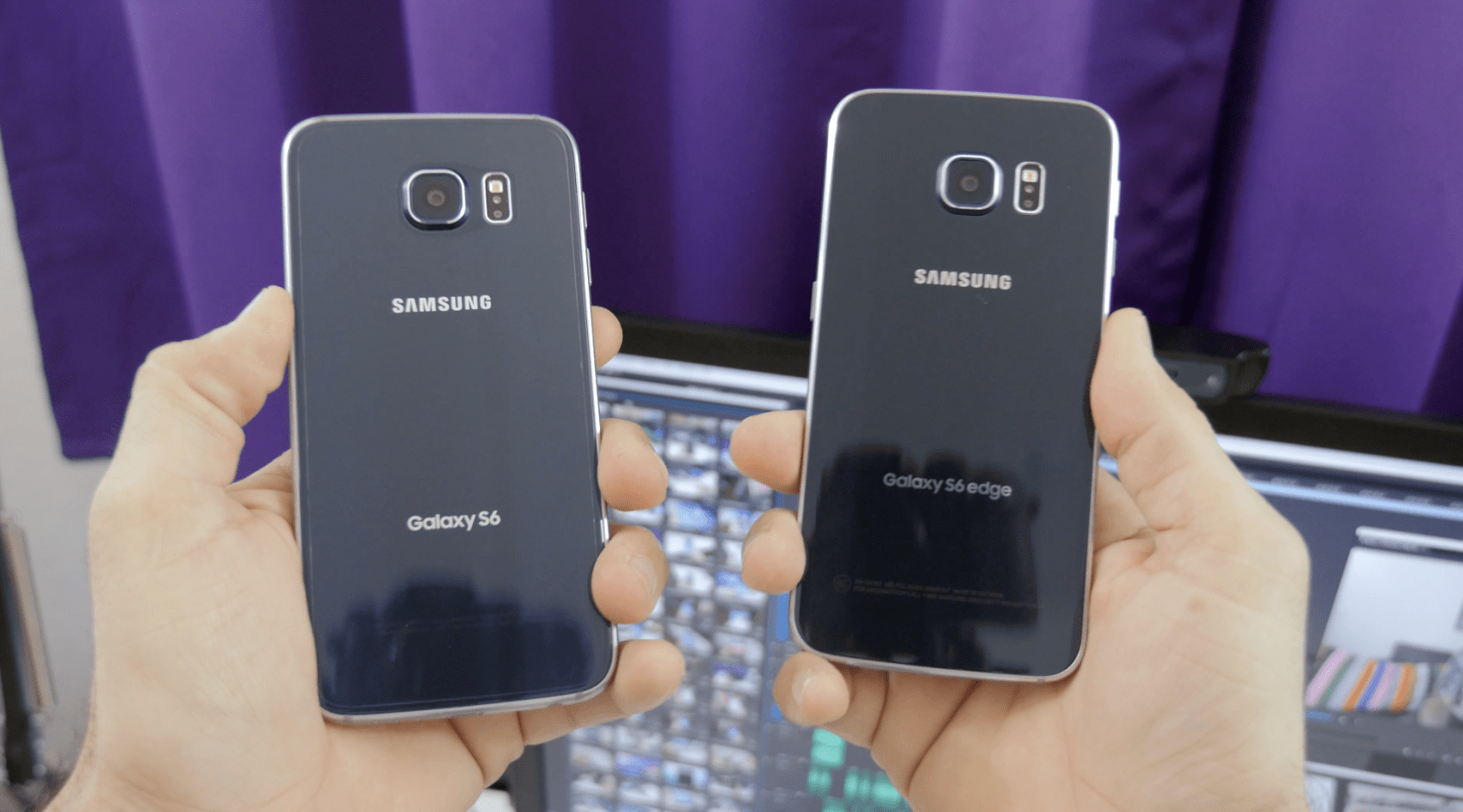 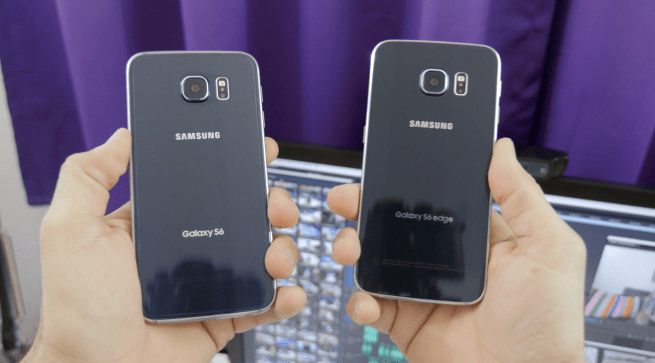 It’s definitely been an exciting time in tech these past few months, but on April 10, 2015 Samsung unleashed its Galaxy S6 and S6 Edge to the world and quickly became a favorite among Android users. The Galaxy S6 takes a radically different approach when compared to its predecessor the Galaxy S5, but this is definitely not a bad thing.

Today we’re going to discuss what makes Samsung’s latest flagship so amazing as well as go over a couple of shortcomings. I’ve been using the Galaxy S6 for a couple of weeks now and this is my review…

As far as the display goes, it’s absolutely beautiful. This is without a doubt, one of the best displays I’ve seen on a smartphone. Some people will argue that there’s not much of a visual difference between 1080p and 1440p on a smartphone, but I beg to differ. There’s nothing quite like it at this point and I’m sure Samsung knows this.

Check out our Galaxy S6 vs S6 Edge video review:

Samsung has majorly stepped up its game this time around. With the Galaxy S6 we have a metal and glass design. It feels much more premium than anything Samsung has ever released. There’s a sleek metal frame wrapped around front and back panels made from Gorilla Glass 4. With the S6 Edge the design is made up from the same materials, but slimmer metal sides to make room for a dual-curved glass display on the front side.

As mentioned to specifications between the two are nearly identical with only a small bump in battery capacity for the S6 Edge. Though in my tests, that never made a huge difference in battery performance, but we’ll discuss that in a little bit. The only concern I’ve had with this design is its durability. Being made from metal and mostly glass, if you happen to drop the S6 or S6 Edge from any reasonable height, it’s likely that one of the two glass panels will crack. Gorilla Glass may be tough, but it still cracks under pressure and definitely scratches. A simple screen protector and rugged case may fix this for most people, but this is something to consider when looking at either device as a potential upgrade.

Unfortunately, with this new design there are some compromises. There’s no longer expandable storage via Micro SD card, no IP rating for dust and water resistance, and the battery is sealed in behind the rear glass panel. This may not be a big deal to some, but it could definitely be considered a step below what was offered with the Galaxy S5.

With the Galaxy S6 Edge, there are a few benefits. The dual-curved display is only as useful as the features it offers, but unfortunately there aren’t too many to take advantage of right now. We detailed all of the S6 Edge features in a separate article (video embedded below), so I’d recommend that you check it out if you’d like to know more about what the S6 Edge has to offer. I’m a big fan of the Edge design, but at the moment there’s just not enough to make it worth an extra $100. If you’re into the design of the S6 Edge, the extra cash may not be a deal breaker, but for myself it just doesn’t offer enough over the Galaxy S6 to make it worth buying.

With the S6 and S6 Edge, Samsung has strayed away from the Qualcomm train and went with its own Exynos 7420 octa-core processor and 3GB of RAM. This combination along with Lollipop and Samsung’s revamped TouchWiz Android skin makes for a buttery smooth device. Forget everything you’ve known about TouchWiz. This time around, Samsung got it right. That being said, we still have a TouchWiz look and feel to the user interface, but it’s definitely been toned down a bit.

Apps are quick to launch, features are there, but not shoved in your face like previous TouchWiz iterations, and everything just works. There’s nothing else to say about the software performance. I’ve been thoroughly impressed over the last couple of weeks. Thankfully, Samsung has left some of its trademark features around (and added new ones) to help as well. 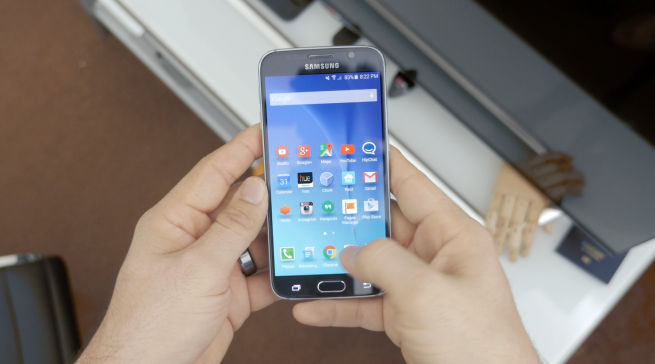 TouchWiz does look similar to previous iterations, but the differences are found in the details. The Galaxy S6 also features new themes, but currently there aren’t very many available though this number has slightly increased since its launch. Speaking of personalization, the Galaxy S6 also allows you to change the grid size of your home screen layout. The included options are 4 x 4, 4 x 5, or 5 x 5 and it’s nice to see this level of customization within TouchWiz finally. There’s also the typical Samsung features like multi-window and pop-up windows, but I honestly haven’t found a use for them on a device with such a small display. These multi-window features are better used with a Galaxy Note 4.

With the Galaxy S6 and S6 Edge we have a 16-megapixel camera with optical image stabilization and an aperture of f1.9. It’s one of the best cameras I’ve used on a smartphone. Pictures come out exactly as expected the first time. Using automatic mode is a breeze and there’s so much detail packed into each photo. Check out the gallery below for a closer look at what the Galaxy S6 has to offer.

As for video quality, the Galaxy S6 and S6 Edge deliver the goods. This camera shoots up to UHD quality. The video (like photos) is crisp and clear. I’ve found it very difficult to find anything I didn’t like about the photo/video performance, but if I could add anything it would be nice to see exposure lock within Samsung’s default camera app. Currently, you only have the ability to lock focus. Either way, Samsung’s new camera is excellent. If you’d like to check out what the UHD video recording looks like, check out our Galaxy S6 cinematic camera test below:

We’ve come to one of the most important topics within this review which is battery life. Unfortunately, there’s not a lot of good things to say here. In my testing, the battery lasts through a normal day, but my use may not be as heavy as yours. The screen-on time would last anywhere between 3.5 to 4 hours. This isn’t horrible battery life, but definitely, nowhere near some of the competition on the market. It may not be the best, but it’s definitely not the worst.

Another important factor to battery life has to do with my specific unit. I’ve been using a T-Mobile variant of the Galaxy S6 and the service is nothing compared to AT&T and Verizon in my area. Because of this, the Galaxy S6/Edge was utilizing the cellular radio a little more than it should, which could have contributed to the less-than-stellar battery life.

On top of that, the battery stats constantly show “Cellular Standby” as one of the top battery consumers. Through the weeks, it became clear that T-Mobile’s Wi-Fi calling capabilities were contributing to this issue and simply disabling the feature fixed that issue, but sadly didn’t extend the battery life through my day-to-day testing.

Overall, the Galaxy S6 has been a great phone to use over the last couple of weeks. I’ve enjoyed just about every aspect of it aside from the less-than-average battery life. That being said, it’s easy to look past this issue thanks to everything else that comes along with the Galaxy S6. As for the S6 Edge, I find it hard to justify the extra $100 you’ll pay to pick it up. The Edge features are nice to have, but it’s nothing that couldn’t be accomplished on the Galaxy S6 with a software update from Samsung. Unfortunately, we’ll never see Edge features on the Galaxy S6. If you’re really into the design, I’d say go for it. The S6 Edge is just as great of a smartphone as its brother, the S6.

Hopefully Samsung will issue a software update to fix some of the battery issues I’ve experienced with the Galaxy S6/Edge, but keep in mind that your experience may be different with another carrier. The Galaxy S6 may be one of the best flagship smartphones we see this year and if you pick one up, I think you’ll agree. There’s a lot of smartphones coming up in the future, but Samsung may have what it takes to stay on top for the rest of this year.