Video ad viewability is 54% across the web, but as high as 91% on YouTube (Infographic) 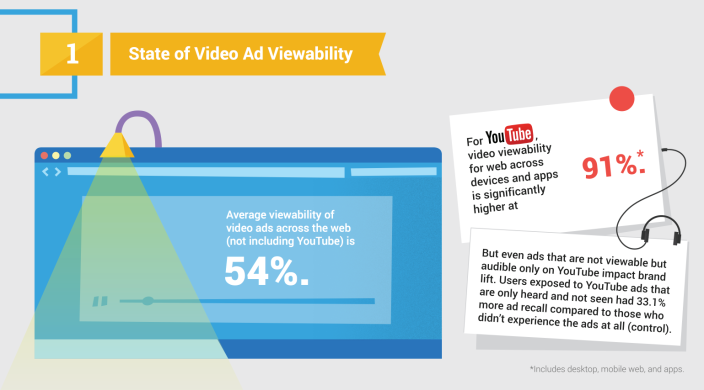 Advertisers want to know that when they pay for a video ad on YouTube or elsewhere across the web, that the advertisement can actually be seen by viewers. A lot can effect an ad being seen, such as the viewer never scrolling to the part of the page where the ad is placed, or users simply scrolling past the ad too quickly to really catch a glimpse. Taking a look into these things, Google recently published the results of a study identifying the “5 factors of viewability,” or, in other words, the things that impact the chance of a video ad being seen.

Unsurprisingly, YouTube and Google’s video ad strategy seems to be strong compared to the rest of the web…

So when can you count an ad as being viewable, and what exactly is viewability? Google follows standards set by the Media Rating Council (MRC) and Interactive Advertising Bureau (IAB), which define an ad as being viewable when at least 50% of the ad’s pixels are visible on a screen for at least two consecutive seconds. The company defines its viewability score as the percentage of viewable impressions out of the total number of viewable plus non-viewable impressions.

With this in mind, Google looked at the viewability of video ads across the web and found that, on average (not including YouTube), only 54% of web video advertisements are viewable on phones, tablets, and desktops. But when looking at just video ads on YouTube, the company found a viewability rate of as high as 91%. Google says that viewability for YouTube video ads is even better on mobile (where more than half of YouTube views come from) at 94%, which makes sense as screen real-estate is scarce on smartphones and tablets to a lesser extent, and an ad plays before the video you’re trying to watch starts.

Whereas in the past advertisers paid each time one of their ads was loaded at all, today they increasingly want to pay only when one of their ads has been displayed on the users screen long enough to have a chance of being seen (or, even better, when their ad is actually engaged with). By improving viewability of video advertisements on the web, companies can ensure that they’re not losing out on an increasingly large portion of advertising spending from media owners. Viewability is especially important for Google, with the vast majority of their total annual revenue still coming from advertising and with video ad spending skyrocketing.

Google concludes by saying that to make advertisers happy, companies should be more like YouTube. To help ad viewability, sites need large video player sizes, prominent positioning near the top center of the site, and an increasing focus on mobile devices.

Check out the full infographic below: