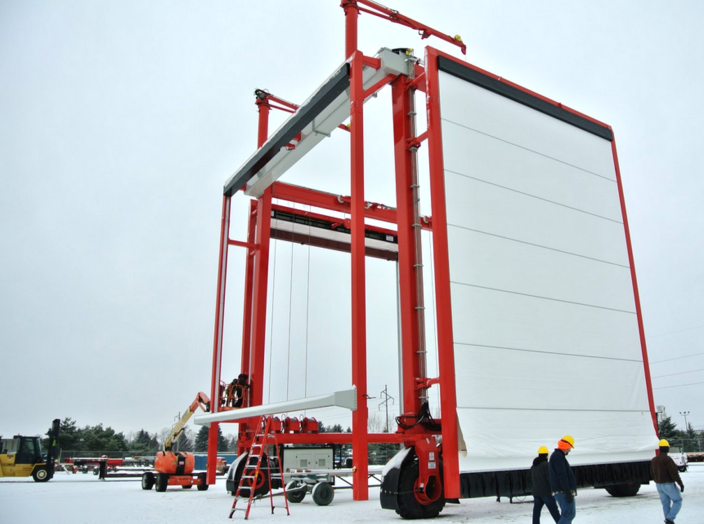 For one reason or another, roughly 4.4 billion people around the world are still without reliable, consistent access to an Internet signal. Google’s mission since its very founding has been to “organize the world’s knowledge,” but that isn’t so easy when vast amounts of information can’t even get online, which is one reason why its Project Loon balloons for spreading Internet by hot air balloons exists. The technology giant has made a lot of progress since announcing the project to the public in 2013, with recent tests seeing the balloons travel over 5,000 miles and provide hours of connectivity to locations that had otherwise never seen it before. Today Google is sharing two improvements that it has introduced to the project.

The first is that the team has created a 50-foot launcher called Autolauncher which cuts take-off time down to 15 minutes from 45 previously. The cube-shaped unit (pictured above) does this in a couple ways: it provides tall canvas sides to block winds up to 15 MPH (winds of 6 MPH or greater are prohibitive to take-off), it clamps down the balloon into place until take-off, and it provides a perch for the antenna which provides Internet so as to prevent it from swinging and setting the balloon off its trajectory.

The second improvement to Project Loon is that the balloons can now communicate with one another. Previously to beam Internet to the ground each balloon needed to be within 50 miles of the ground station of a telecommunications company that it would gain its LTE spectrum from. Now, however, the balloons can be anywhere from 250 to 500 miles from a station because balloons closer to a ground station can pass high-frequency signals between each other. This is the same idea as neighborhood mesh networks, where cheap routers can communicate with each other, share WiFi, and continue to communicate with each other even if the public Internet goes down. As a result, Google can now provide Internet to an entire region like West Africa with fewer expensive ground stations than before.

The hope now is to successfully provide a few days of continuous service at a time within its test areas (wind has proven to be a big challenge to doing this), and once it overcomes the challenges to accomplishing that it wants to roll out service to underserved markets such as Africa, Latin America, and Southeast Asia, ideally by the end of 2016.