Deal: Get a Moto E, a Motorola Bluetooth speaker, and a year of service for $95 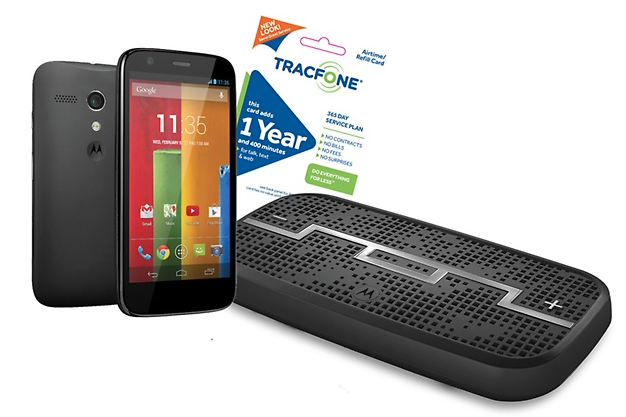 Groupon is offering the highly praised Moto E smartphone bundled with a Bluetooth speaker and 1200 Tracfone minutes for $99.99. Using the coupon code GOODS5 drops the price even further to $95. On Amazon, the Moto E, Bluetooth speaker, and Tracfone service would cost you $238 in total.

The Moto E has been praised for offering a great Android experience for such an affordable price, so this deal makes it even more enticing for first time Android users or first time smartphone users in general. It’d also make a great burner phone if you’re in need of one of those.

The Moto E includes a 4.3-inch touchscreen with 3G connectivity. Unfortunately it runs Android 4.4 KitKat, but includes WiFi, Bluetooth 4.0, and a 1.2GHz dual-core processor. It’s not great, but for the price and bundle it’s hard to beat.

You also get 1200 Tracfone minutes included in the bundle, as well as 1.2GB of data service and 1200 text messages. The Tracfone service is good for a year.

Buy the bundle on Groupon now. The coupon code GOODS5 drops the price to $95.