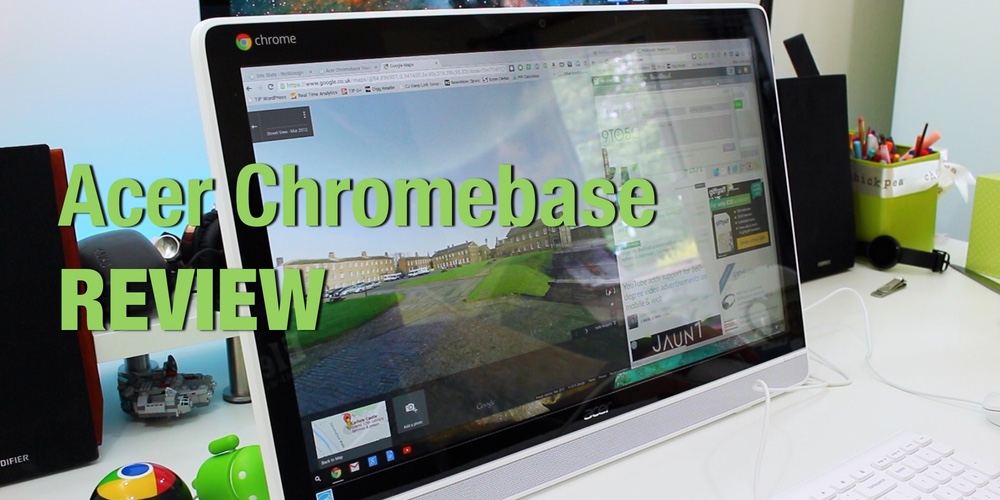 The rise of Chrome OS has been nothing short of fantastic. With so many of our daily computing needs being met with online services, having a laptop which “only runs a web browser” and a bunch of useful web apps isn’t such a bad idea anymore. You can save on costs massively, and still be able to do almost anything you need to do. Unless you need lots of storage for gaming or media, it’s hard to argue against buying a Chrome-based notebook.

But is the same true of a desktop? I’ve been using the Acer Chromebase Touch for the past week or so and, as much as there are frustrations, there are also things I really enjoyed.

Overall design what you’d expect from a 21.5-inch desktop that costs well under $500. That is to say, there’s a lot of plastic. The entire body of the touchscreen-equipped Chromebase is a clean, matte-finish white plastic. It’s rounded towards the back, with a number of vents in a row along the top, just beneath the large Acer branding.

Positioning of the ports is curious to say the least. What you’d class as the ‘necessary’ ports are hosted in a row, under a ledge, right on the back. Here you have two USB 2.0 ports, the power input, HDMI and an ethernet port. If you want access to the SD card slot, 3.5mm audio out or single USB 3.0 port you have to pry open a large plastic door which sits just behind the left edge of the display. While in place it disguises the ports and looks just like the rounded back on the opposite side. When detached (when you’re using these super-useful ports) it sort of sits on your desk looking out-of-place, not knowing what to do with itself.

I’m not normally baffled by seemingly unimportant things like this, but I really don’t get it. Why have a door? Why not have exposed ports? I could think of a ton of reasons why the SD, USB 3.0 and 3.5 jack should be instantly accessible, and not require the removal of a large, flimsy plastic door.

One of the best design features is the kickstand on the back. It has a hole to feed all your cables through to keep everything as neat as possible. What’s more, it can adjust to almost any angle and still hold the Acer desktop in place sturdily. Whether you want it virtually upright, or almost horizontal, it can pivot to meet your requirements.

And then we get to the screen itself. I’d be lying if I said it was the best 1080p screen I’ve ever seen. But it’d be stupid to expect one of the best to be housed inside a super-affordable desktop. For the money, it’s great. Colors on the LED-backlit LCD panel are vivid and detailing is pretty sharp providing you’re sitting far enough away from the display. But it lacks in a couple of areas.

Contrast isn’t particularly high. Blacks come off as more really dark gray while whites aren’t as crisp and clean as you’d get on a higher end display. Still, colors are relatively accurate and viewing angles are great. You can see content on-screen from virtually any angle presuming there isn’t any bright light reflecting off the surface. The one thing I will say, however, is that the grid of tiny touch sensors all along the surface of the monitor seem to interfere with the image a little. It’s not massively noticeable, but I would be interested to see how detail compares to the non-touch model, and if the lack of touch sensors means you get a clearer image on the cheaper desktop.

Still, the screen is plenty big enough to have a couple of windows side by side, making it a perfect workstation for anyone whose work is primarily based online. What’s more, you can connect it to a second monitor, or TV screen using the included HDMI cable. You can even rotate content on the screen 90, 180 or 270 degrees depending on how you want to mount your screen.

Since I have the touch-model, I had three main input methods to go between: mouse, keyboard, and the touchscreen. I’d love to laud the benefits of having a touchscreen on a desktop computer, but sadly, I can’t. Yes, it was very useful for the odd time when I want to zoom in and out of images and maps using a pinch-to-zoom gesture. But holding my arm up for any length of time was uncomfortable, so those interactions were short, few, and far between.

That’s not to say I think the Chromebase would be better off without it. The times I wanted to use it, it was beneficial. Google Maps is one web app that really benefits from multi-touch manipulation. It’s so much quicker and easier than fiddling around with a mouse. Especially a cheap mouse like the included Acer one. The scroll-wheel was a tad unresponsive, and had a rubbery almost-squeaky feel to it. And the keyboard wasn’t particularly wonderful either.

I don’t mind thick, protruding keys when the switches are mechanical. But the Acer keyboard that ships with the Chromebase (as far as I can tell) isn’t mechanical. Keys feel a little spongey and don’t offer enough feedback for me. I’ve lost count of the number of missed letters I’ve had just writing up this review. But these are the complaints of a touch-typist whose fingers are familiar with a specific keyboard.

Acer’s Chromebase is powered by an NVIDIA Tegra 2.1GHz processor. It’s ARM-based, meaning it’s not too dissimilar to processors found in smartphones and tablets. For the most part, it copes well with daily tasks. In the 10 days I’ve used it, only once did the Chromebase start to get unresponsive and unbearably slow, and that was after I’d left it on overnight and had far too many tabs and windows open. It has 4GB RAM, which should be plenty for running the usual browser-based tasks. Response times aren’t instant, and often times, web pages take a little while longer to load than what I’m used to. That said, it’s a case of managing my own expectations. It was never going to match my 21.5-inch iMac for speed and performance. For its price point though, it’s definitely fast enough.

General scrolling through web pages and interacting with onscreen content is on-par with similar machines. As long as you don’t have too many windows open for too long, it will not slow down too badly. The one time my unit did get unresponsive, there were a few seconds in between clicking or tapping and seeing a result on screen. However, shutting down and restarting solved this issue and I’ve not seen it since.

Overall, it’s a great all-round package especially when considering the initial outlay. If you’re looking for a budget desktop computer and can do all your work with Chrome OS, then this could be the best $300-$400 you ever spend.

There are two versions of the Acer Chromebase. The model I reviewed is the touchscreen model which will set you back $429 and ships in 3-5 weeks. Or there’s the non-touchscreen one which costs just $329 and is available to order now.

As for alternatives, there aren’t really many on the market right now. This is the first and only touchscreen all-in-one Chrome OS desktop. However, you can still pick up the LG Chromebase for just $279. It’s slightly less powerful, and doesn’t have the versatile kickstand, but it’s arguably more attractive and has a full HD display.