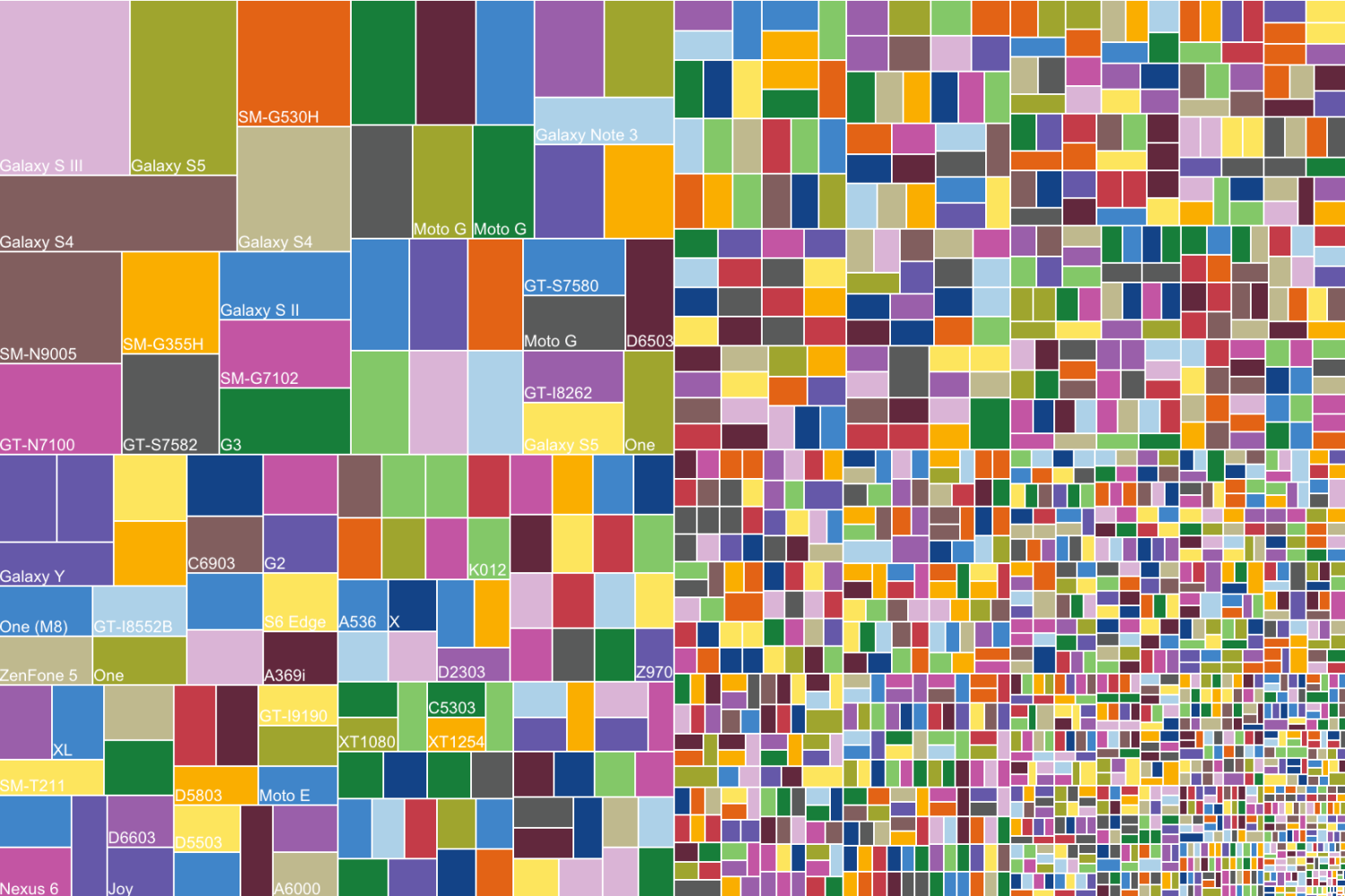 Keep in mind when you see these numbers that Google has worked hard through new developer documentation and the guidelines of its Material Design language to make designing apps that can adapt to many screens easier. Its “Be together, not the same” campaign is specifically aimed at promoting the huge amount of choice consumers get to find just the right device for themselves when they go with Android. But it’s still a continued challenge with many devices still on older versions of Android, where certain APIs and capabilities weren’t yet added, and many devices not having bleeding-edge hardware that a developer might want to access, like NFC.

Let’s take a look and see how things have changed over time, starting with hardware fragmentation. The image you see at the top of this post represents every single one of the over 600,000 devices that have installed the OpenSignal app over the past few months, sized based on how many units of that device downloaded it — every piece of data in this post is based on downloads of the OpenSignal app. 24,093 distinct devices, meaning different hardware, up from 18,796 a year ago. In just two years, that has doubled from 11,866 distinct devices in 2013. More shocking is that OpenSignal measured 1,294 distinct companies who have built and sold Android-powered tablets and smartphones.

Further than just OS version fragmentation, Android’s open source nature provides manufacturers the unique opportunity to differentiate their devices by modifying the OS system UI to their liking, completely changing the look of default elements like the phone app icon or app drawer (although this is changing). Here’s the spread of brands making Android devices, and their ownership of the market: 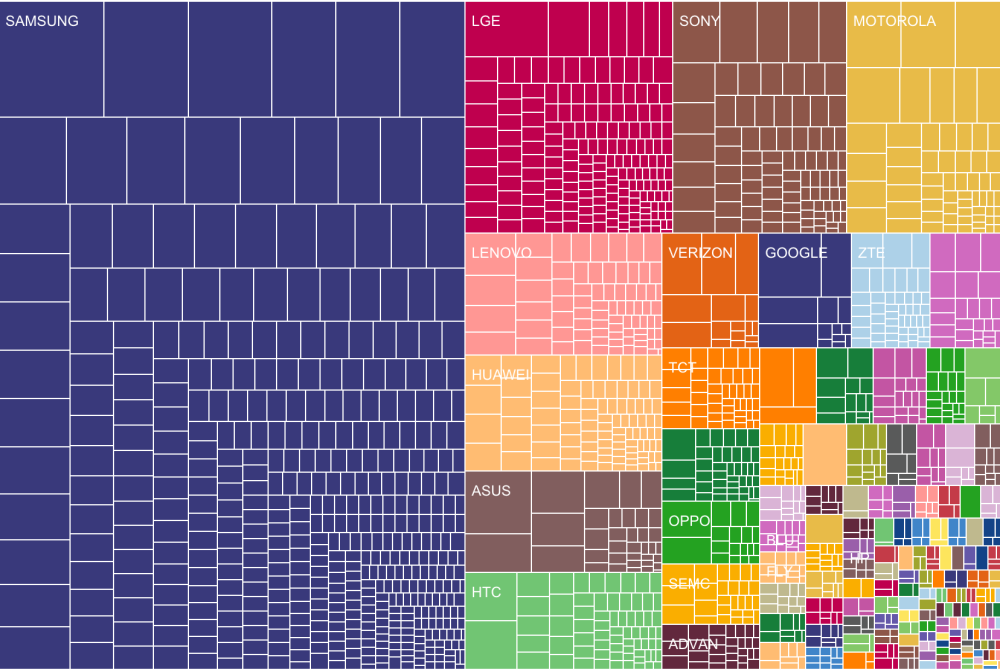 Samsung still, clearly, has many Android devices out in the wild with fingerprints on them, even though the company is trailing other manufacturers in fast growing markets like China. Samsung had an Android market share of 47.5% in 2012. Today? 37.8%. Note all the rising players on the right from emerging markets who have mostly come out of nowhere, like ZTE, Oppo, Blu, and a bunch of others. The overall market, and the variety of devices, is still growing.

The picture is a little more rosy for developers when looking at OS version fragmentation. Active devices are still spread across several versions, but the dominant version, Kit Kat, saw its market share rise over the past 12 months (eating away at older versions): 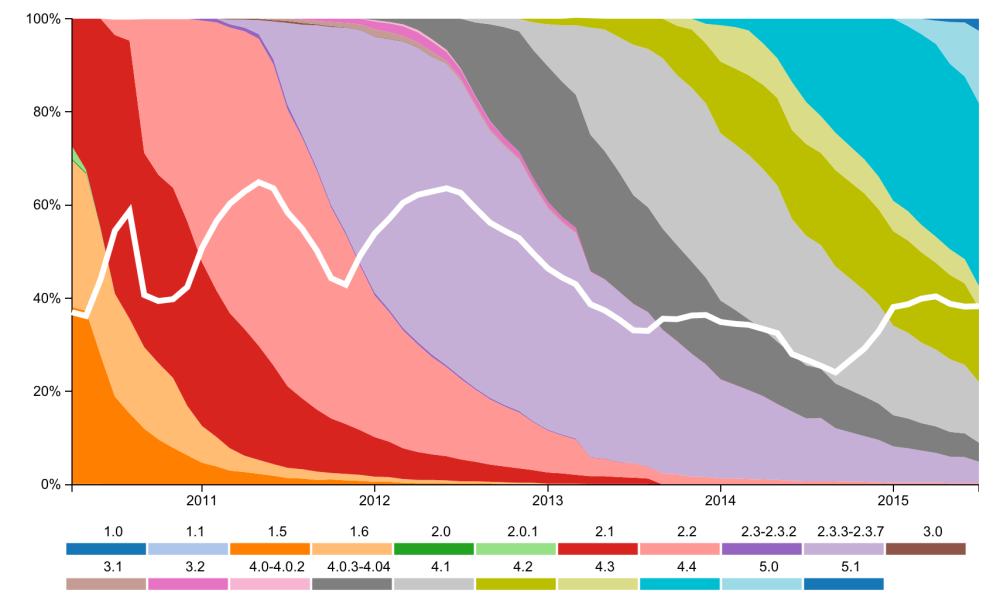 Another talking point is screen size. You can see all screen sizes of the Android devices which installed OpenSignal’s app on the left, alongside all of the possible iOS device screen sizes on the right:

From a blog post OpenSignal wrote to accompany this data, we can see that consumer desire for larger screens is real. And going back to my mention of hardware-level sensor support, here’s how the prevalence of hardware sensors looks:

Fortunately at least three things are driving these bleak numbers to change: consumer demand for the experience that comes with stock & unmodified Android, the real launch of Google’s Android One program which will see mid-range phones with unmodified Android and frequent updates from Google, and those aforementioned design guidelines from Google for building adaptable software UIs. They haven’t made much of a dent yet, though. Let’s check back in a year.