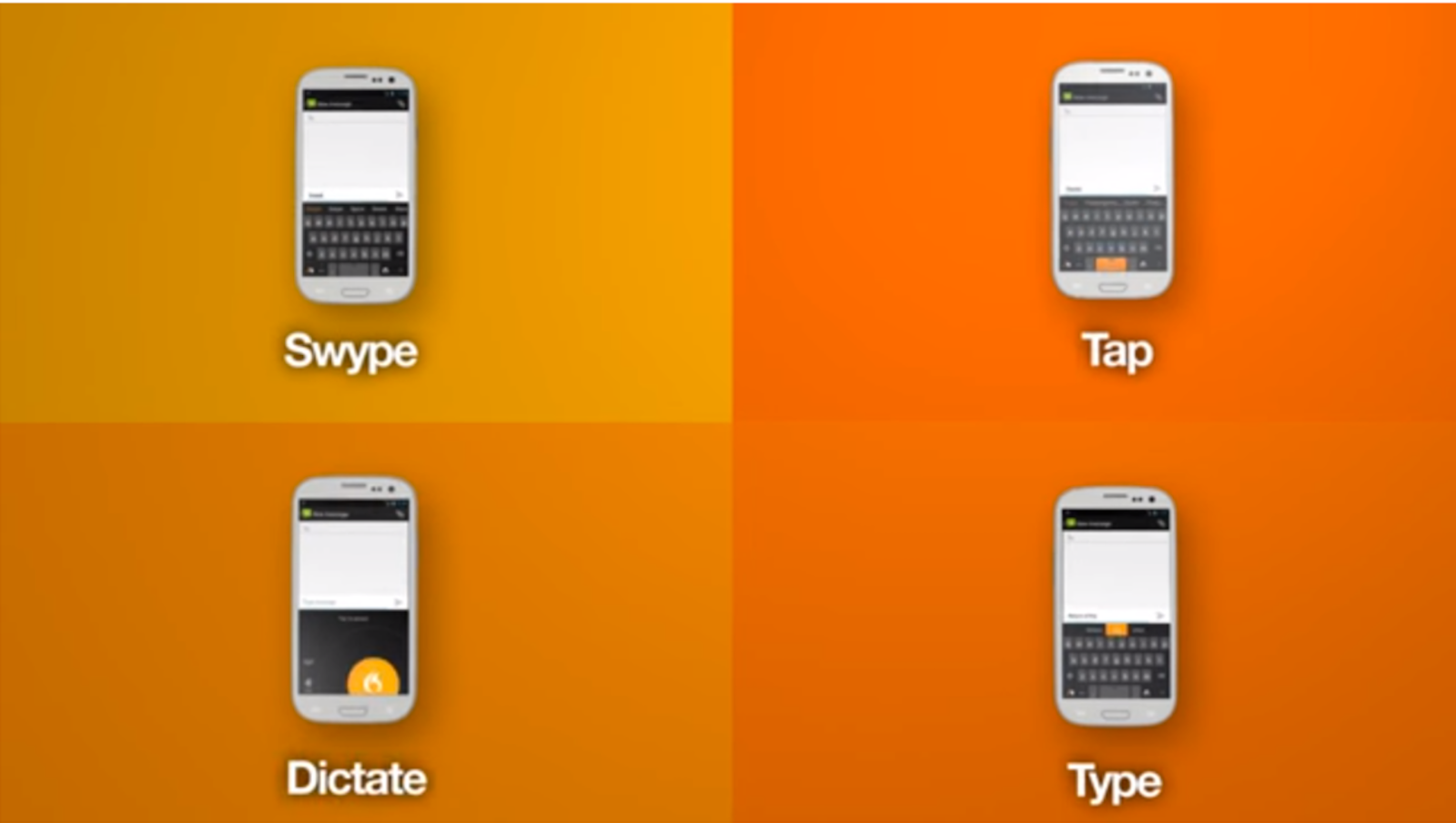 Nuance Communications is today releasing an updated version of its popular Swype Keyboard for Android, “the world’s most powerful keyboard,” which includes an all-new Swype Store with additional premium themes as well as an emoji keyboard. Swype is a popular alternative to the default Android keyboard due in part to its many customization options, like the ability to change the keyboard’s overall layout, key sizes, and a bunch more.

The third-party keyboard has included the ability to modify its design — say, to have the colors of the keys match those of your favorite soccer team — through downloadable themes for some time now thanks to the availability of its own Swype Store. The first addition to come with this update is the inclusion of almost 40 new themes to this store for users to choose from, bringing up the total available themes to almost 80, along with a much more robust store that has deeper organization and navigation. Fans of the Star Trek series will be excited to learn that 19 of the new themes feature characters and settings from the show’s most iconic installments. These are made under license by CBS, so it’s all legitimate, but they’ll cost you anywhere from $1.99 for one theme to $6.99 for an eight pack. 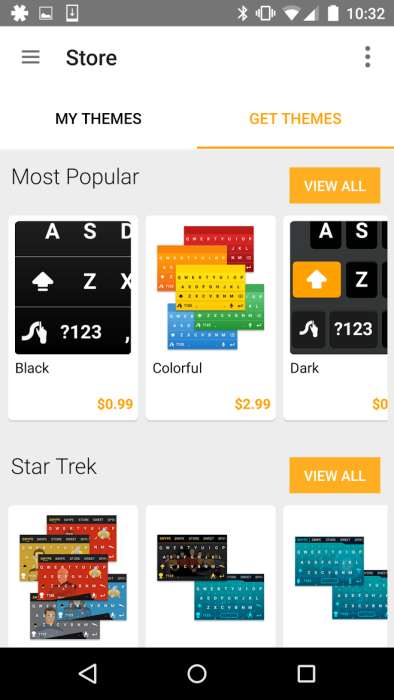 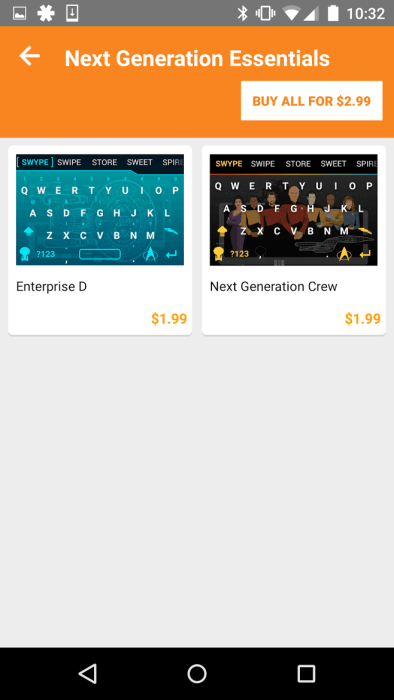 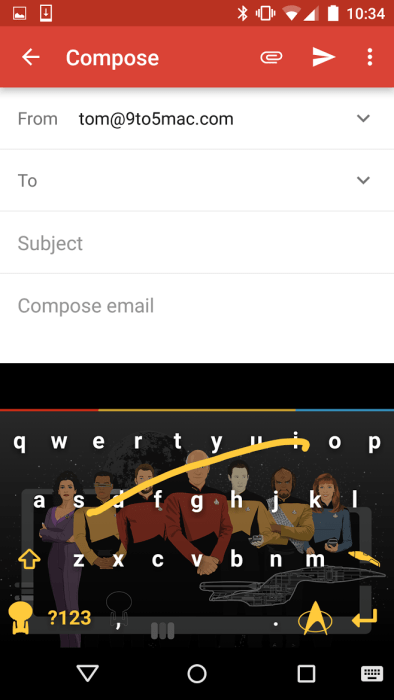 The second major addition coming with this update is an emoji keyboard. Hold your finger down on the return key, and up will come access to a keyboard with all your Unicode-standard emoji. These emoji are organized neatly into different categories like recently used emoji and facial expressions that you can quickly switch between — all pretty standard fare stuff from other keyboards which have already added emoji. Perhaps to help it stand out from other keyboard offerings, however, Nuance says that the Swype emoji keyboard offers attention to detail with a “smooth look and feel, providing fun animations when you make a selection, quickly snapping between types of Emoji, and offering convenient access to recently-used Emojis.” 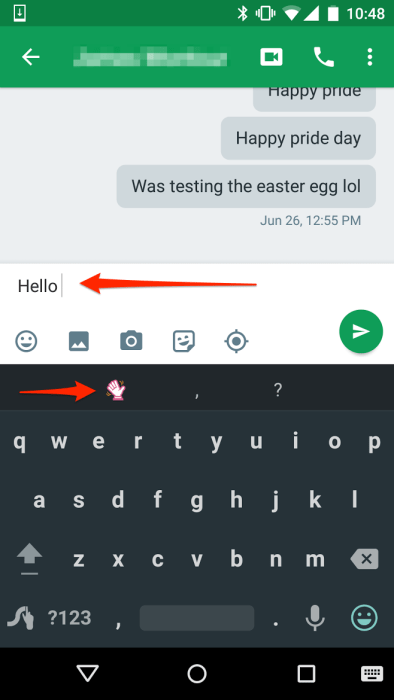 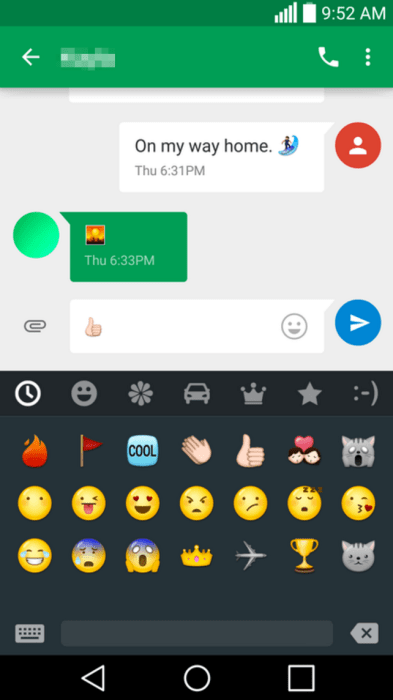 The addition of an emoji keyboard makes sense considering that Nuance already added emoji prediction to the Swype keyboard several updates ago. In its Word Choice list where Swype takes the word you just typed (or tapped from the list) and tries to guess what you may want to input next, you’ll see emoji suggestions. So if you type “Hello,” for example, a hand wave emoji may show up in the suggestions. This is something that the Google Keyboard and other third-party solutions like SwiftKey have been able to do for some time now. Nuance does much of its prediction by drawing from its large worldwide user-base to create a crowdsourced, cloud-based database of popular words and phrases in every part of the world.

“The latest Swype keyboard for Android demonstrates that the keyboard experience goes beyond just the words on the screen, with more options for users to incorporate their personalities and interests,” said Scott Taylor, senior vice president, Mobile Devices, Nuance. “So while we continue to innovate our pioneering predictive input and intelligent tracing technology, we’re also focused on equipping Swype with new features and options to give consumers the best possible experience on Android.”