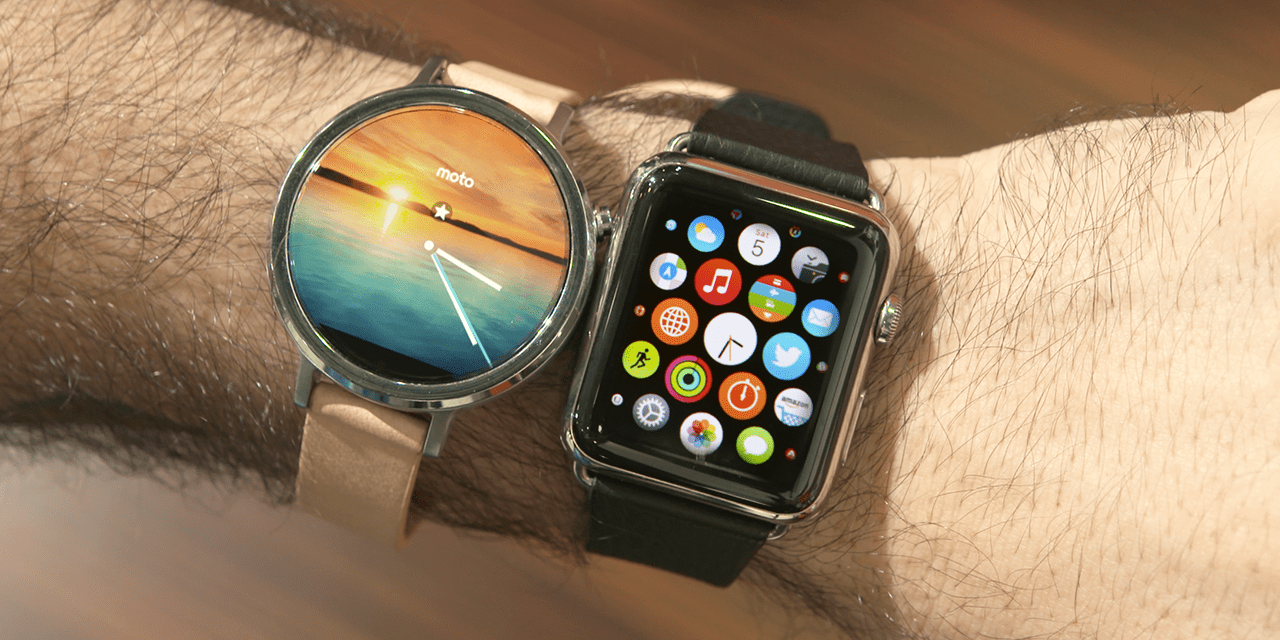 Now that Android Wear is officially compatible with iOS devices there’s a lot more smartwatch love to go around, at least for Apple fans. Android users have had a taste of the first generation, but Motorola’s new Moto 360 is one of the many new options available for both sides for the fence. The question is, should you give Motorola your money?

If you’re not familiar with the first generation or Android Wear in general, you can check out our Moto 360 review here. This year Motorola has updated the internals to closely match the other smartwatch offerings on the market, but does it pack enough to win over the hearts of iPhone users? Like Apple, Motorola has two different sizes available for this year’s Moto 360. There’s a 42mm version which is the same as Apple’s largest offering and a slightly bigger 46mm version for those who prefer chunkier watches.

Both devices are water-resistant as well, which is definitely a must-have on any electronic device worn on your wrist. Activity tracking is available with heart rate sensors on each device and it’s safe to say you’ll get about a day’s worth of use on a full charge, though Motorola claims the Moto 360 will last up to 1.5 to 2 days depending on which size option you choose. Either way, expect to charge any of these watches at night.

Comparing the sizes, you’ll notice that the 46mm Moto 360 isn’t too much larger than the 42mm Apple Watch, but the difference is really present when worn on your wrist. I prefer the 42mm look of the Moto 360, but anything smaller than that would just look funny on my arm.

When it comes to customization, the Moto 360 definitely wins. First off, it accepts any 22mm watch band with the new lugs that were added this time around, but with Apple you’ll need to stick to proprietary bands which can run you a bit of cash if you go with the official offerings. You can even take it a step further and completely customize the colors and variation of the Moto 360 using Moto Maker.

For software customization, Apple may have the lead here. Both offer customized watch faces, but there’s a lot more to do (almost too much) with Apple’s watchOS interface than you’ll find on Android Wear. Android Wear’s simplicity may be seen as a positive aspect though depending on who you ask. You can also take phone calls and use Siri on the Apple Watch, while the Moto 360 will only respond to voice search and Google Now for iOS users, but Android Wear is much more functional on Android. With the Moto 360 your primary method of input is going to be the touch screen. Navigating through menus, apps, and more will all happen with a swipe of the finger, but you can use motion gestures with your wrist to flip through various notifications. On the Apple Watch, most navigation is done with the touch screen, but there’s also a Digital Crown on the side that will allow for scrolling and zoom in certain situations and a couple of buttons to perform various tasks, Unfortunately, the relocated button on the new Moto 360 will simply put the device to sleep when pressed, but again the entire story here is simplicity.

If you’re only in need of notifications, it may be safer to stick with the Moto 360, but its $299 entry point for a base model may drive potential customers over to an Apple Watch for native support that starts at $349 for the Sport model. It’s nice to see Android Wear playing nicely with iOS, but there’s an obvious risk taken given that Google can only support so much without being able to tap into the full potential of iOS. At the end of the day, this choice comes down to personal preference, but if you’re aiming for simplicity it’s quite possible that you’ll be happy with the Moto 360 or any Android Wear offering that’s compatible with iOS.

Which one do you prefer? Did Google’s latest Android Wear compatibility announcement change your mind about buying or keeping an Apple Watch? Obviously if you’re on Android, Apple Watch isn’t an option, but let us know what you think.