Smartphones are in a golden age of fast charging with Qualcomm’s Quick Charge technology being adopted by various manufacturers (and with the latest Nexus phones having fast charging via USB Type-C). Now, Chinese OEM Huawei (which has been gaining speed recently with the Huawei Watch and the Nexus 6P) has announced new quick charging lithium-ion batteries of their own at a conference in Japan.

The first battery with a 600 mAh capacity can be charged to 68% capacity in two minutes, but the real impressive result is a 3,000 mAh battery that can be charged to 48% in five minutes. The company said that this translates to about ten hours of phone calls. For comparison, the latest Nexus phones tout four hours of use after a ten minutes top up. Videos released show the batteries being charged via a rather hefty looking external device, rather than through the charging port of the phone. 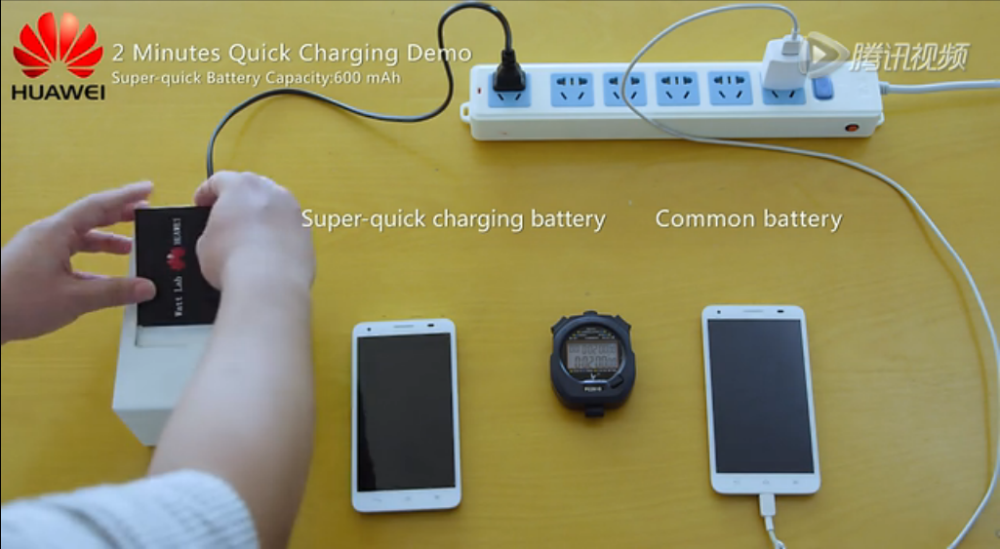 This innovation is made possible by “bond[ing] heteroatoms to the molecule of graphite in anode,” Huawei says, “which could be a catalyst for the capture and transmission of lithium through carbon bonds.”

Huawei states that the process increases charging speed without decreasing the amount of energy that can be stored or battery life. The company says that these new batteries have gone through multiple rounds of testing and hold up to their claims. There is no mention of when we can expect these batteries out of the lab and into phones.