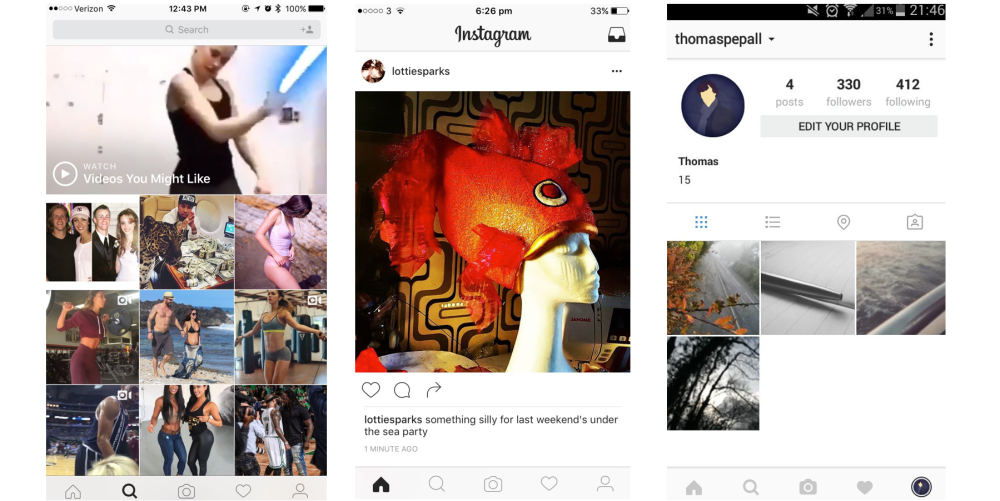 Instagram, following the controversial announcement that it would change the order in which images appear in user feeds, now appears to be testing a complete redesign of its app. Instagram has long stuck to the same skeuomorphic design, but if this redesign rolls out to everyone, the app could finally move forward and fall into line with the design trends being adopted by many other apps.

According to a pair of tips sent to 9to5Mac and a tweet from Thomas Pepall, Instagram has recently been testing a design change with a small percentage of its total user base. Commonly referred to as A/B testing, Instagram is testing this design with only a handful of users before it decides whether or not to roll it out to the general public.

As you can see in the screenshots above, the new interface is very monochromatic and bland compared to the classic look of the app. The overall function of the app, however, remains the same.

In a statement to Mashable, Instagram confirmed that it is testing the redesign with a small percentage of its user base, noting that this is a design test only. This means all functionality remains the same, at least in this stage of testing. “We often test new experiences with a small percentage of the global community. This is a design test only,” an Instagram spokesperson said.

Last month, Instagram rolled out support for 60-second videos to all users, saying video viewership has increased by more than 40 percent over the last 6 months. This update followed the company rolling out multiple account support to users. Most notably, however, Instagram recently revealed that it would switch to new personalized algorithms based on each user for displaying content, a change it later backtracked on after backlash from the public.

What do you think of the redesign Instagram is testing? Let us know in the comments.

@9to5mac Is this an Instagram update? No colors… pic.twitter.com/Vlal7WZlVB