Pokémon GO is big, and there’s no doubt about that. The AR-powered app hasn’t even launched globally, and yet it’s making it to the headlines for all sorts of reasons. We argued that GO represents technology at its very best, and some recently surfaced data seems to be backing this thesis up…

According to SimilarWeb, in fact (via Forbes), Nintendo and Niantic Lab’s game is growing so fast that its daily users are about to surpass none other than Twitter‘s, at least on Android. Just let sink this in for a second: the skyrocketing explosion of Pokémon’s first entry in the smartphone realm has been so strong that the developers had to pause the global rollout due to server instability.

And that’s just the beginning; during the last two days, GO was installed on 5.6% of all Android devices in the US, with a number of total installations that far outgrows Tinder, for example. And, as far as actual usage goes, it looks like people are spending more time training their pocketable monsters than sharing pictures on Snapchat. 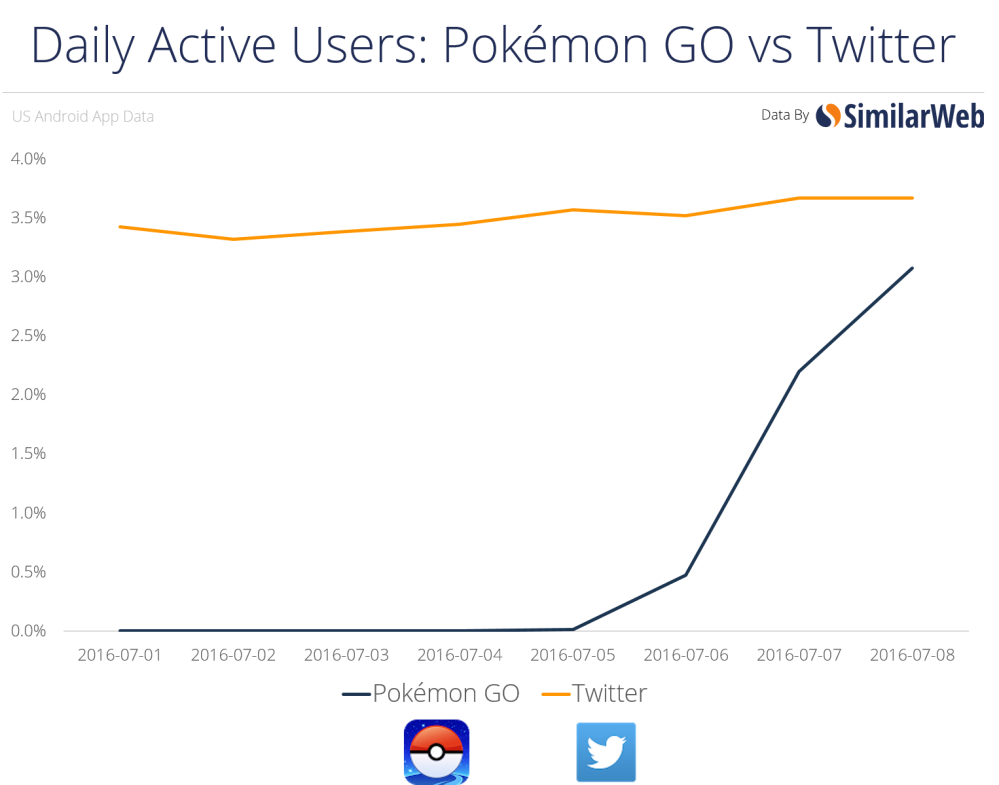 And, in fact, Google‘s own Play Store has been invaded by GO, which now topples the charts above the likes of apps such as the aforementioned Snapchat, as well as Facebook, Instagram and the other known giants. And that has been matched by a spiked interest in the term “Pokémon” as a whole on Google Search, too, which has now hit a somewhat predictable all-time high.

It is then important to point out that most of this data comes out of installations being made via the Play Store; as SimilarWeb notes, with an increase in traffic to the app download “increasing from just over 600,000 visits on July 5th to over 4 million visits on July 6th”.

In total, “30.5% of all desktop search traffic over this time period came from searches with the term “pokemon” in them”, indicating that the thirst for Pokémons is indeed incredible. Sure, we don’t know when this boom will actually stop, but Nintendo’s creation has — successfully — been around for twenty years now, and it looks like its gleam has been everything but lost.