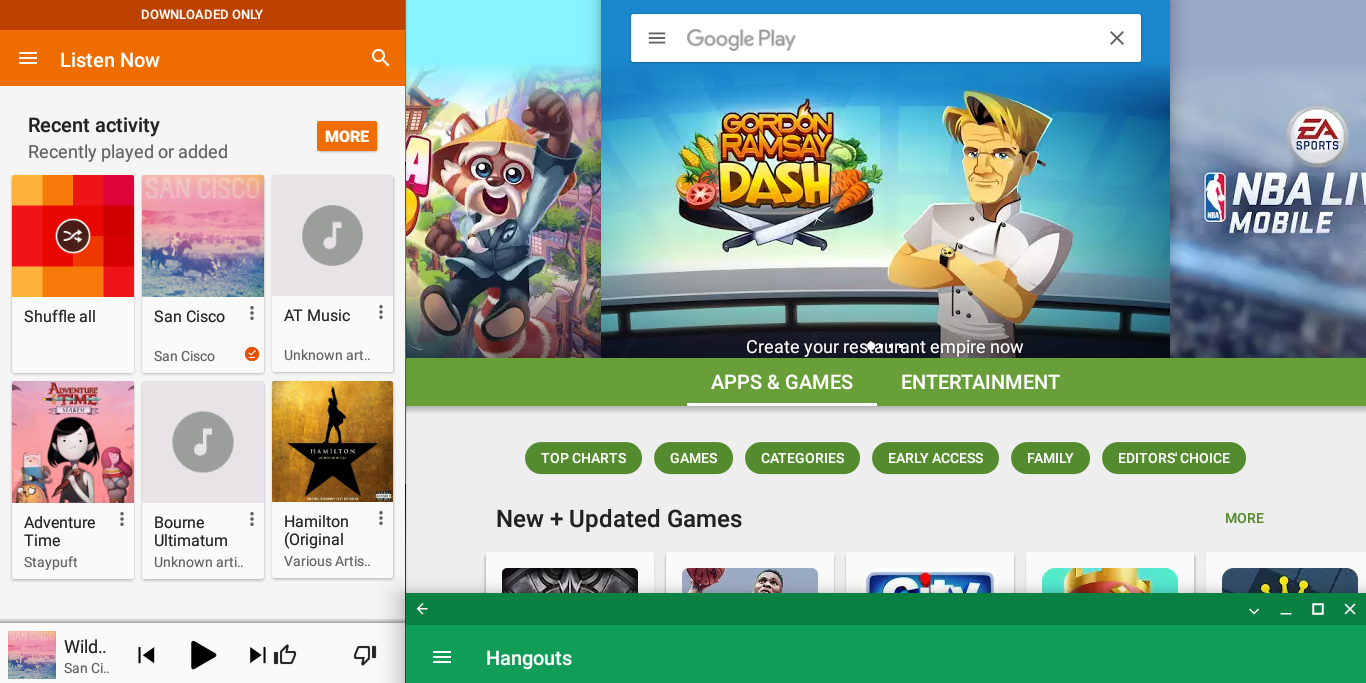 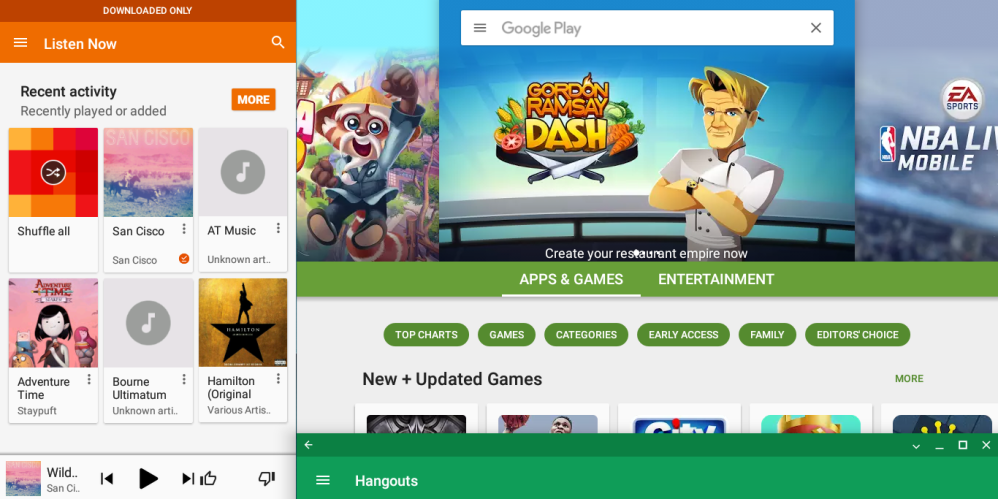 I have been using a Chromebook as my sole computer for the past two and a half years. Never in that time have I felt the need to switch to another desktop operating system. Frankly, Chrome OS can accomplish pretty much everything I need to do — from heavy writing, to presentations, to photo editing. The “thin client” has become a reality for me with Chrome OS and it perfectly suits my needs.

At this year’s I/O, though, Google announced that Android apps would be coming to Chrome OS. From a conceptual level, the added functionality is powerful, but admittedly erodes the simplicity of Chrome OS. The actual implementation makes it obvious that Google just grafted a full version of Android to Chromebooks and it shows in usage. Despite this, I can already see how well-designed Android apps provide a better experience than their web counterparts and can be neatly integrated into my daily workflow…

Android apps effectively treat Chrome OS as a tablet interface. By default, apps open in either a small landscape window or in full screen. Those optimized for Chrome can also be used in a phone-like portrait view. They are perfect for pinning to the side while a tab takes up the rest of the screen. This is especially useful with Play Music and even moreso with a chat app like Hangouts.

Most Android tablet apps, though, are lacking and for the most part still just stretched out phone apps. A good tablet app takes advantage of the extra screen real estate offered by the larger display, but there aren’t as many of these available on Android as on competing platforms. There are good examples of this, though, and they do equally as well on Chrome OS as they would on your average Android tablet.

For instance, Gmail makes use of panes to show a list of emails next to the message with buttons on the app bar to delete, archive, reply, etc. I’ve found this interface to be so much more useful and efficient that I’m making the decision to switch away from the website. It’s a better use of space and not to mention nicer looking with Material animations and flourishes perfectly translating to Chrome OS.

Android without the system UI

It may not be immediately obvious on the surface, but the update slowly hitting Chromebooks is almost a full version of Android built into Chrome OS. While the exact Android launcher, app switcher, and notification pane are not present, Chrome OS counterparts assume these functions.

However, the integration leads to some scaling problems and interface concerns. I’m not sure if people will instinctively download all the apps installed on their phones to Chrome OS. But if they do, it will results in a major inconvenience when finding and opening apps. Even just installing the apps on my first homescreen felt cluttered on Chrome OS.

From anywhere in Chrome, it takes two taps to access the full app grid, and looking through this grid will be a hassle if you have a significant number of apps. Additionally, the toolbar on the bottom of the screen serves double duty as a dock for favorite apps and to show what’s currently running. This could also get quite cluttered as it’s easy to forget to close apps.

Android’s actionable notifications are my favorite part of the mobile OS and they get directly ported into the Chrome OS notifications panel. Play Music or Pocket Casts media notifications are identical in Chrome, as are ones from apps like Gmail or Twitter. Tapping reply on a notification will open up the corresponding app just like on a phone.

In addition to the standard Chrome OS settings, there is now another settings panel for Android apps. It is in fact just the Android settings app, but with fewer sections. Under Device settings, users can control Notifications, Apps, and Storage. Personal features the same Security, Account, and Location settings. Lastly, System lets users control such things as Accessibility and Printing.

Using Android apps with a trackpad and keyboard

Since there is effectively a full version of Google Play Services installed on Chrome OS, the vast majority of Android apps can run fine. This includes a number of Google’s apps. However, as has always been the case with Android, there are apps that are specifically designed for phones that will not install on Chrome, with an app’s Play Store page showing a warning.

As you can see above, all Android apps you install feature the same window controls as other Chrome windows. On the right there is a close, maximize, and minimize and to the very left there is a system level back button for apps that don’t display a virtual back. Tapping back on the main screen of the app will actually close it.

Users also have access to the full Android share menu on Chrome OS, but actions like tap and hold do not translate to a trackpad. It works as you’d expect on a touchscreen, however, and that speaks to how nice it would be if all future Chromebooks had touch sensitive displays. 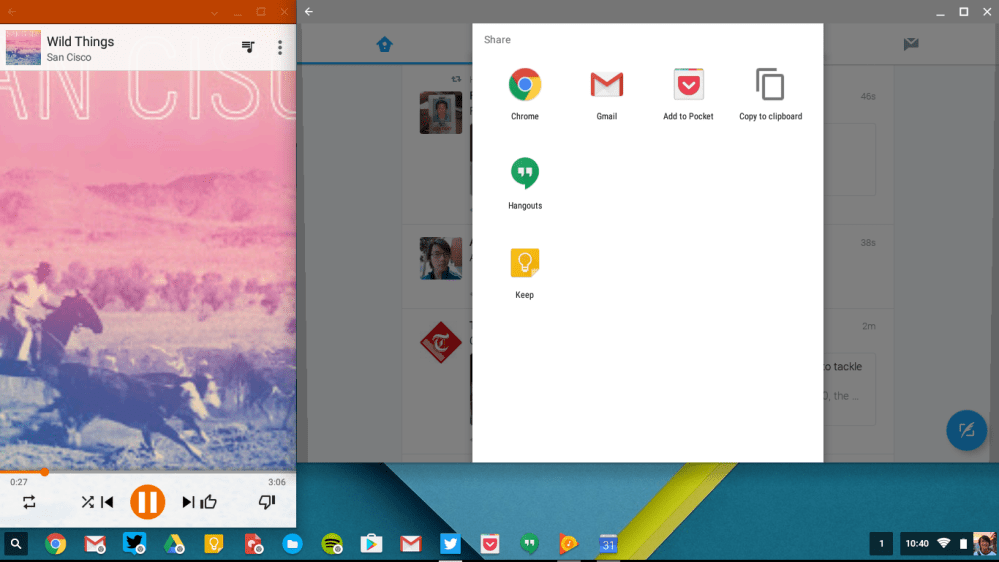 A Competitor to the Mac/Windows duopoly

As a pro-sumer using a Chromebook for the past two years, I’ve come to the belief that the average person could make the switch to a cloud-based OS and not miss a beat. This is partially due to how smartphones are increasingly the device that most people use as their main computer.

With the addition of Android apps to Chrome OS, I’m even more confident that the average person would be fine with Google’s cloud OS. In fact, Android apps may add the missing functionality that the web may have been lacking for some people. The perfect example is Microsoft Office. Many would suggest that Google Docs is a good enough alternative, but that’s no longer a caveat if you go with a Chrome OS machine.

From an industry standpoint, Google has effectively now accomplished with Chrome OS what Microsoft was attempting with Windows 8 and 10 on its first attempt — unifying the desktop and mobile spaces with one platform and app store.

In this writer’s opinion, Google has a bright future with Chrome OS and it seems possible — especially considering its growth in the education and budget markets — that it could soon be an important and major OS platform. It needs some tuning and simplification before a wider release, but it’s undoubtedly a solid enough foundation to build on.

All of this said, those who use their Chromebook Pixel (2015), Acer R11, or Asus Flip for any type of work should avoid upgrading to the Canary channel of Chrome to access Android apps for the time being. At the moment it is quite buggy and crashes a lot. In addition to Android apps just hanging, the Chrome browser itself is quite unstable. I had to completely shut down my R11 several times to recover from a freeze.